Ramaphosa’s foray into Ankole breeding began back in 2004 when he travelled to Uganda to meet with President Yoweri Museveni. Due to disease control measures enforced by the Department of Agriculture, Forestry and Fisheries, Ramaphosa used artificial insemination technology and embryo quarantine processes to buy and import 43 Ankole cows from Museveni.

In addition to their regal appearance, Ankole cattle produce rich milk and meat high in polyunsaturated fats and omega oils. These hardy cattle can live up to 30 years, relying on limited nutrients and water.

Today, Ramaphosa is the biggest Ankole farmer in South Africa. Ankole bred on the president’s 5,100-hectare Ntaba Nyoni farm located near the small town of eManzana often fetch top prices at auction. An Ankole bull, Maximus, with a right horn length of over 110cm sold for R640,000 in 2017.

Ramaphosa’s Ntaba Nyoni recently made headlines outside of the auction world due to the retrenchment of over 20 farm workers, which the president said was due to a foot-and-mouth outbreak which resulted in losses.

READ | This is the R4 million buffalo Cyril Ramaphosa just sold - along with R15 million in other game, including rare Ugandan cattle

On Friday 30 April, Ramaphosa attended an auction at The Bull Ring, located long the N17 between Bethal and Ermelo in Mpumalanga. The National Ankole Auction featured 65 lots from several of the country’s top breeders. The auction sold R10.7 million worth of Ankole, with Ramaphosa’s herd of nine cattle accounting for a quarter of the auction’s total value.

With horns almost 90cm long – and a distance of more than 1.2 metres between the two tips – the five-year-old Mufasa was the highest selling Ankole of Ntaba Nyoni’s lot, fetching R700,000. 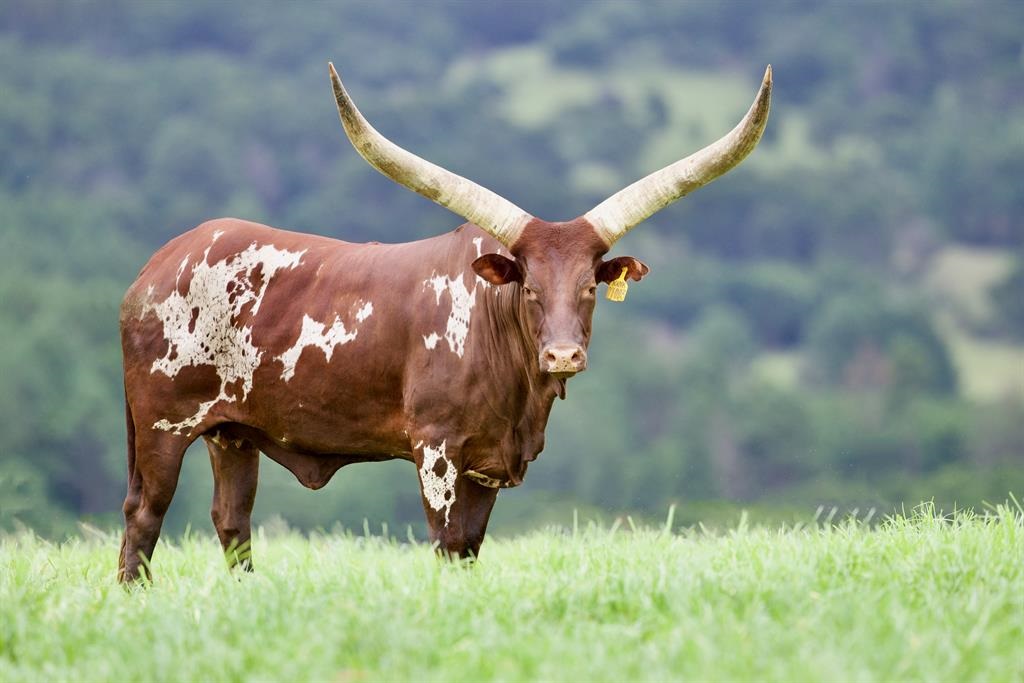 Proven to breed mottled genetics and mother of Ntaba Nyoni’s prized breeding bull Tshena, Lindi was auctioned as a pregnant cow and fetched R560,000. Lindi is carrying the offspring of Tshinakaho, which Ntaba Nyoni describes as the most “outstanding bull in the country”. Previous cows impregnated by Tshinakaho have sold for upwards of R600,000. Another cow which birthed Tshinakaho’s offspring, the five-year-old Lolo was sold for R400,000 with heifer calf. Another pregnant Ntaba Nyoni cow, which had already produced two calves within five years, was sold for R360,000. The 23-year-old cow – “proof that Ankole continues to be productive well into their late 20s” – was sold for R220,000 with her mottled bull calf sired by Tshena. Masindi, the herd matriarch of Ntaba Nyoni Ankole, is described as having a “feminine face” and “deep bod”. Three Ntaba Nyoni Ankole sold for less than R100,000. Kwekwe, a young Anokle bull descended from a line that sired Maximus, sold for R60, 000. Pembani, another young bull, auctioned for R70,000 and a uniquely coloured bull, Amora, sold for R55,000.

Related Links
Salaries for Ramaphosa, ministers set to remain unchanged – for the second year in a row
A single Nguni bull just sold for a world record R310,000 – over WhatsApp
This is the R4 million buffalo Cyril Ramaphosa just sold - along with R15 million in other game,...
Next on Business Insider
Ancient poop contains clues about feasts eaten at construction of Stonehenge more than 4,500 years ago