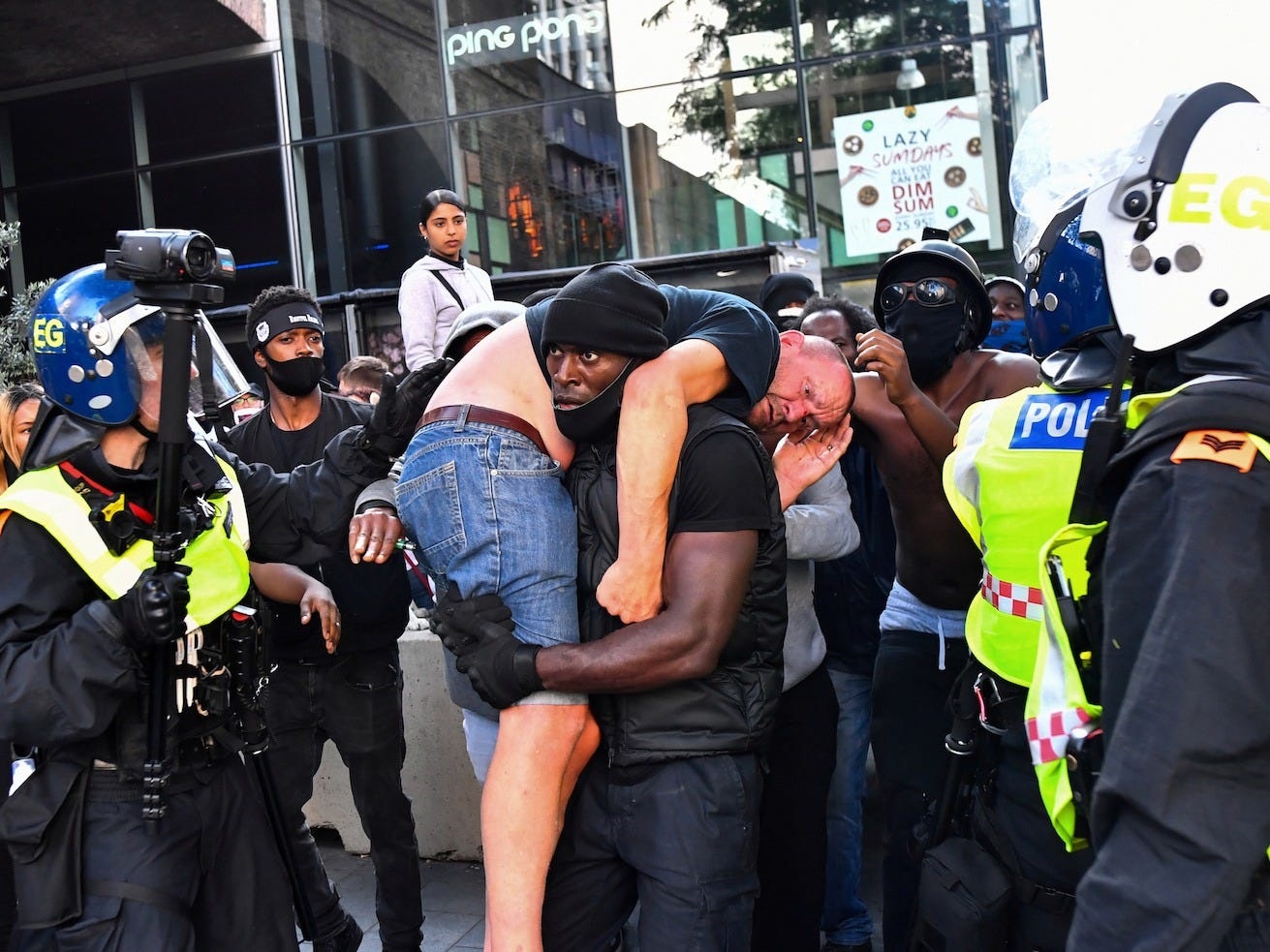 A protester carries an injured counter-protester to safety, near the Waterloo station during a Black Lives Matter protest in London, Britain, on June 13, 2020.
Dylan Martinez/Reuters

A powerful photo taken during an anti-Black Lives Matter demonstration in London on Saturday shows a Black man carrying a white protester to safety after he got injured.

It came at the end of sporadic violence across the capital between white protesters, some members of far-right groups, and Black Lives Matter supporters. Police made more than 100 arrests.

The picture, which is trending on social media, was taken as hundreds of demonstrators, some of which belong to far-right groups and organisations, clashed with police in central London's Parliament Square.

The protesters, many of which were middle-aged white men, claimed they were there to "protect" statues, after recent calls to remove them because of their colonial associations.

"Easily my favourite photo of the day," someone wrote on Twitter.

Easily my favourite photo of the day. A BLM protestor carries a far-right â€˜counter-protestorâ€™ to safety as fighting breaks out in Waterloo, London. Tell me again how â€˜both sides are the sameâ€™. Theyâ€™re not, they never have been + they never will be. This image will become iconic. pic.twitter.com/cba0xA8cxB— Lauren Townsend (@LaurenJTownsend) June 13, 2020

"Wow. This is it. This is the photo," another person commented.

Videos on social media of the demonstrations show white protesters gathered in Parliament Square, many of which were shirtless or clutching beers, throwing bottles, cans, and smoke canisters at mounted police.

In response, police in riot gear formed lines and blocked exits to contain protesters in the square.

Things already escalating here on Parliament Square. Bottles and smoke bombs thrown at police. And you can see as a protestor smacks my phone out of my hand as I try to film the scuffles.

In a post on Twitter, UK Prime Minister Boris Johnson condemned the violence used by the protesters as "racist thuggery."

"Anyone attacking the police will be met with full force of law. These marches & protests have been subverted by violence and breach current guidelines. Racism has no part in the UK and we must work together to make that a reality" he wrote.

Racist thuggery has no place on our streets. Anyone attacking the police will be met with full force of the law. These marches & protests have been subverted by violence and breach current guidelines. Racism has no part in the UK and we must work together to make that a reality. — Boris Johnson #StayAlert (@BorisJohnson) June 13, 2020

Many of the protesters gathered around a statue of former British Prime Minister Winston Churchill, which was boarded up on Friday, claiming to be protecting it after it was vandalised during a BLM protest, the previous week. Authorities also fenced off other statues in Parliament Square, including memorials to Nelson Mandela and Abraham Lincoln.

Speaking before the protest, Paul Golding, the leader of the far-right political organisation Britain First, was cited in the Guardian as saying: "I am extremely fed up with the way that the authorities have allowed two consecutive weekends of vandalism against our national monuments."

Another protester told the New York Times: "People are defacing my history and my culture. That's why these people are here because we feel we're getting attacked."

Statues and monuments have become flashpoints in ongoing demonstrations against police brutality and racism sparked by the death of George Floyd, a Black man who died in Minneapolis after a white a police officer kneeled on his neck for nearly nine minutes.

The demonstration on Saturday came partly in response to a social media callout to "protect the monuments," according to the Guardian. At one point, a protester was pictured urinating next to a memorial for PC Keith Palmer, a police officer who was after stabbed to death during the Westminster Bridger terror attack in 2017.

"We have seen some shameful scenes today, including the desecration of PC Keith Palmer's memorial in parliament, in Westminster Square, and quite frankly that is shameful, that is absolutely appalling and shameful," Patel said.

The 28-year-old man has since been arrested "on suspicion of outraging public decency," according to the BBC.

By Saturday evening, more than 100 arrests were made "for offences including breach of the peace, violent disorder, assault on officers, possession of an offensive weapon, possession of class A drugs, and drunk and disorder," according to a statement by The Metropolitan Police. Around 15 people were injured, two of which were police officers.

A Black Lives Matter group in the British capital had to call off their demonstration planned for Saturday over fears of clashes with counter-protesters.

But small groups of anti-racist protesters still gathered in the capital and briefly clashed with counter-protesters in Trafalgar Square. The two groups were throwing bottles and fireworks at one another as police tried to separate them, the New York Times reported.

The alteration comes a few days after protesters at a Black Lives Matter demonstration in the southwest city of Bristol, tore down a statue of Edward Colston, a 17th-century slave trader, and dumped it in a river.

London isn't the only European city that saw protests this weekend. In Paris, around 15,000 people rallied to condemn police brutality and racism on Saturday, also demanding justice for Adama Traoré, a 24-year-old Black man who died in 2016 after police arrested him.

Traoré's sister, who was at the demonstration, said: "What's happening in the United States is happening in France. Our brothers are dying," according to the BBC.