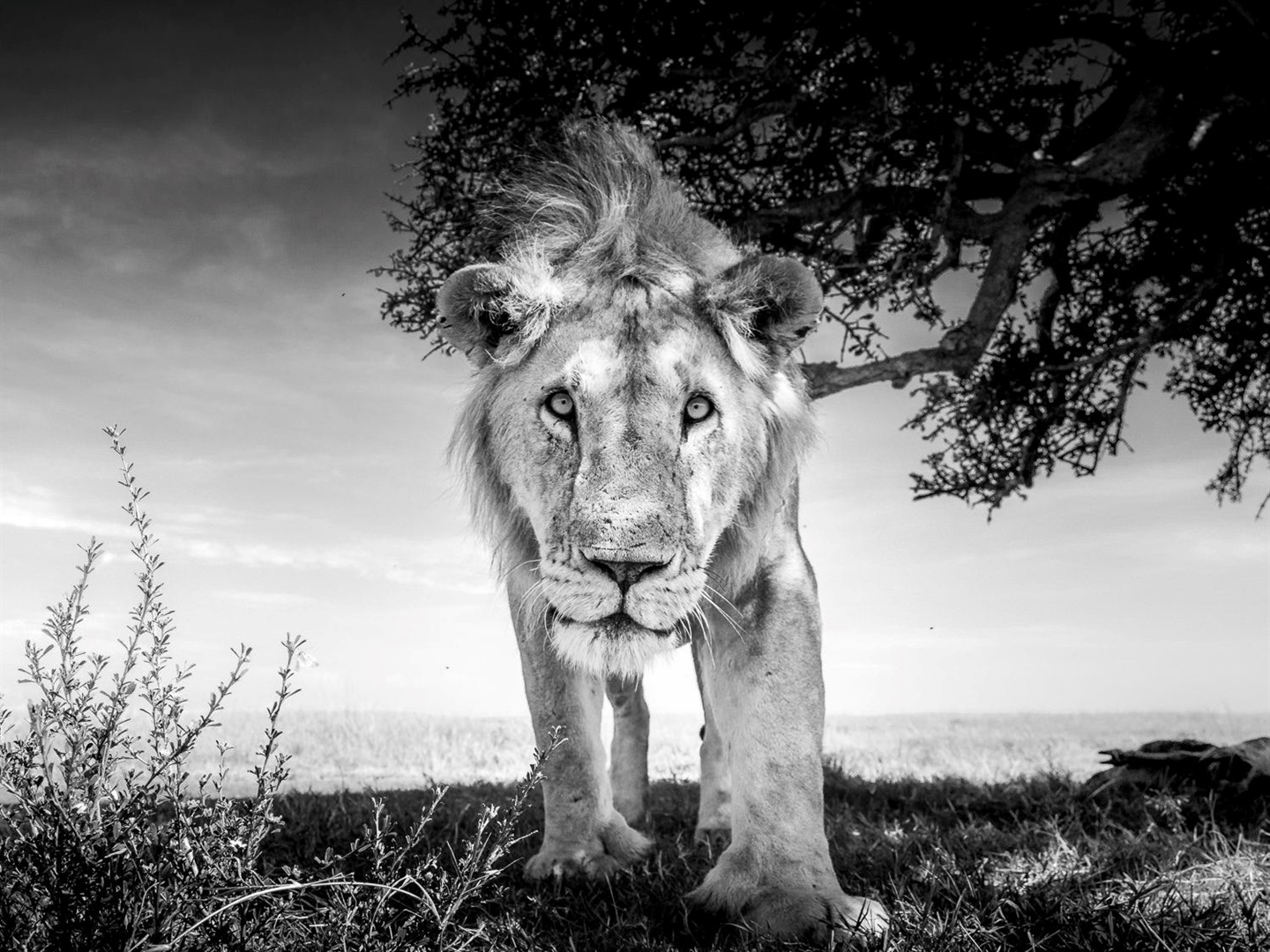 Graeme Purdy captures potentially dangerous wildlife as they've never been seen before ... up close and personal.

Most of the animals featured in his book have been known to be deadly, but Purdy's portraits of lions, hippos, and elephants show a more peaceful side. His book is called "Eight Feet" because all of the images were taken within 8 feet of these majestic creatures.

Ahead of World Animal Day, Insider spoke to Purdy about how he manages to get so close and capture these one-of-a-kind photos.

Graeme Purdy, from Northern Ireland, is a nature and wildlife photographer. 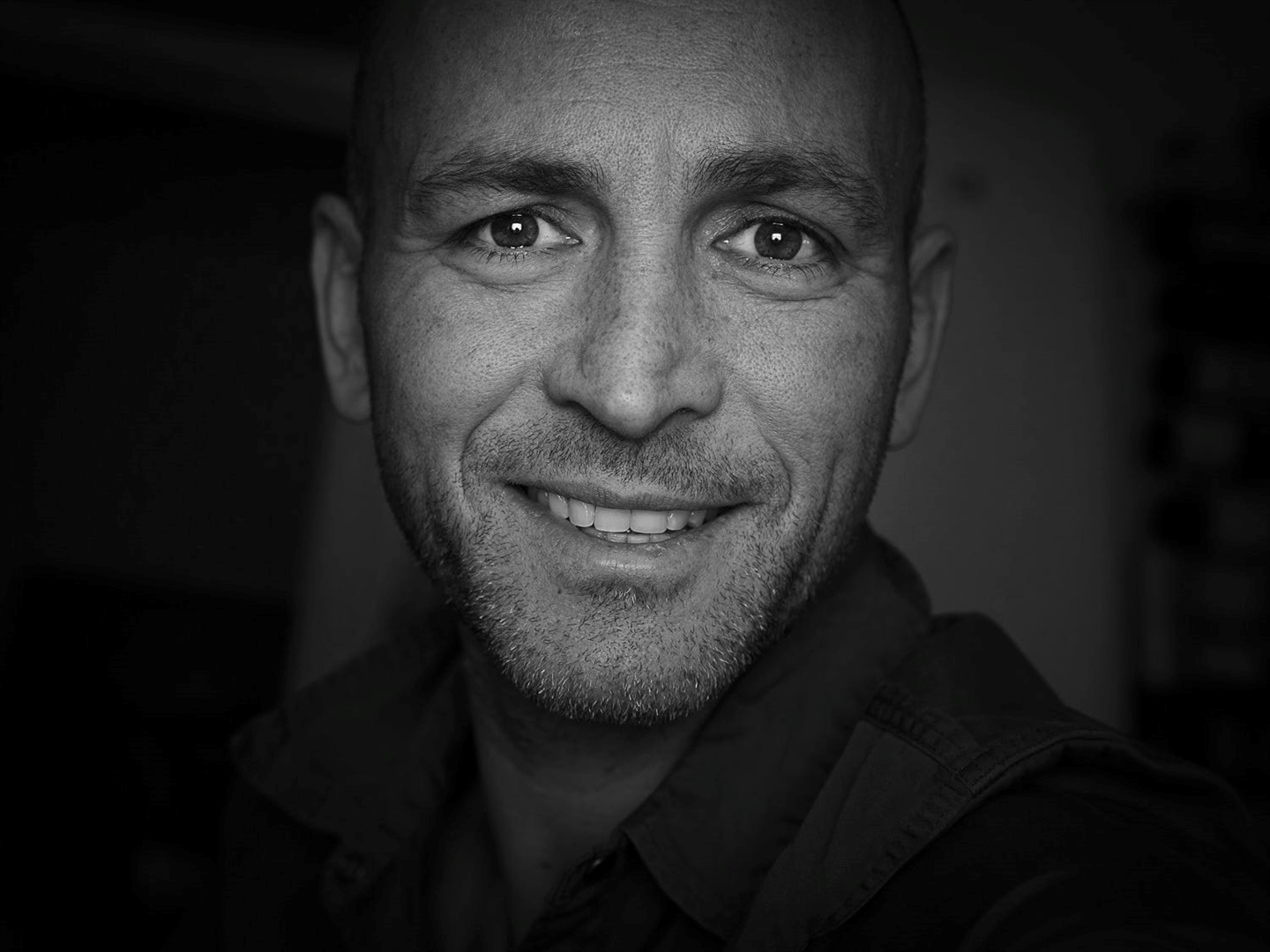 Purdy has been capturing photos of Africa's wildlife for around 20 years. For his latest book, Purdy decided he wanted to try something different by getting as close as possible to his subjects. The book took him around 18 months and several trips to Africa to complete. Most of the images in the book were taken in Kenya and Uganda.

To capture up-close photos of animals like this hyena, Purdy attached a remotely activated camera to a remote-controlled car. "It's a very slow, almost stealthy type of photography," Purdy told Insider. "You can't go quickly, you can't race around. Animals just see that as threatening behavior or odd behavior."

When the remote-controlled car is deployed near the animals, Purdy remains in a separate, safari vehicle nearby with a driver.

To help him take photos, Purdy used a special animal auto focus on his camera. Developed by Sony for house pets like cats and dogs, the feature also did a remarkable job of focusing on the faces of lions and other animals like hyenas, Purdy said.

The cheetah was difficult to capture because the big cat can be quite timid and elusive. Cheetah with her cub.
Graeme Purdy

"They're quite placid. They're quite delicate," Purdy said. "They're obviously speed demons and excellent hunters, but they don't climb well and they don't have a lot of endurance. They're in decline. If they're out hunting or walking, you don't want to disturb them."

For three days, Purdy followed a mother and her cub waiting for the right conditions for the photo. Cheetah with her cub.
Graeme Purdy

Purdy refused to interfere with the mother and cub when they were hunting because he didn't want to put either in danger. The mother had three cubs, but two had been killed by a buffalo. After three days, Purdy found them while they were enjoying a stroll.

For 90 minutes, Purdy took photos of the pair while they walked, sipped water from a creek, and rested. Neither mother nor cub cared about Purdy's nearby remote-controlled car.

"That was probably one of the rarest moments I had with my remote camera," Purdy said.

In Purdy's opinion, buffalo are the most dangerous animals on the African savanna. "People ask what is the most dangerous animal, and it may surprise people but the most dangerous is easily the buffalo," he said. Purdy said most local tribes know at least one person who was killed by a buffalo. "When a buffalo sees you coming, they'll hide behind bushes and wait on you."

When trying to get a photo, Purdy's remote-controlled car was trampled by a buffalo stampede. "They charged my car on a regular basis," Purdy said. "You couldn't get too close with the vehicle because they charge vehicles from time to time."

Buffalo have even been known to attack other animals on the savanna. Elephants can be dangerous to humans if provoked. "Elephants are different because it depends on what kind of life they had with humans. Some of them have been in permanent conflict with humans," Purdy said. "In some parts of Africa, they are very aggressive and if they see [someone] then they'll literally charge."

Because they've been well protected where Purdy took photos, the elephants he encountered were peaceful.

When trying to take a photo, Purdy had to be extra careful not to scare off the elephants because of their heightened sense of hearing. "With animals like elephants, I noticed recently even on silent shutter we can't hear it, (it's actually a digital read-out of the sensor so nothing actually moves in the camera) but the elephants can hear it," Purdy said. "So I need to wait until I get them right where I want them because as soon as they hear the camera, they get a little bit suspicious."

Capturing up-close photos of red deer proved to be just as challenging. Purdy said he tried deer urine, deer scent, and deer food to draw them closer, but he eventually realized that it didn't matter what he did, the deer kept getting spooked.

Due to mating patterns, red deer let their guard down only four months out of the year. "It's actually an annual cycle, so with red deer," Purdy said. "No matter what you do, it's basically only four months of the year that the male elk will be relaxed enough to tolerate any kind of camera in the vicinity of them."

Despite their reputation as killers, the hippos were actually very shy. "They kind of have a reputation for being some of the biggest killers in Africa, but that's when people used to use the rivers for transport," Purdy said. "Basically when the hippo is in the water, it feels safe. If you paddle down the river in a boat, you're kind of threatening their safe space so they get quite aggressive. When they're out of the water grazing, they graze at night and go back into the rivers during the day, they're kind of like a fish out of water. They don't feel comfortable."

Purdy spent 30 minutes trying to get a picture of a hippo without spooking it. "If you get within about 100 yards, they'll notice you and actively run back to the river or walk off," Purdy said. "They won't let you get close."

When Purdy noticed one grazing, he slowly drove the remote-controlled car closer and closer. Every time he was about to take a photo, the hippo would turn away from the camera, but right before it returned to the water, he was able to get a couple of shots.

The only time Purdy felt fear was when he took photos of a group of lionesses and their cubs. 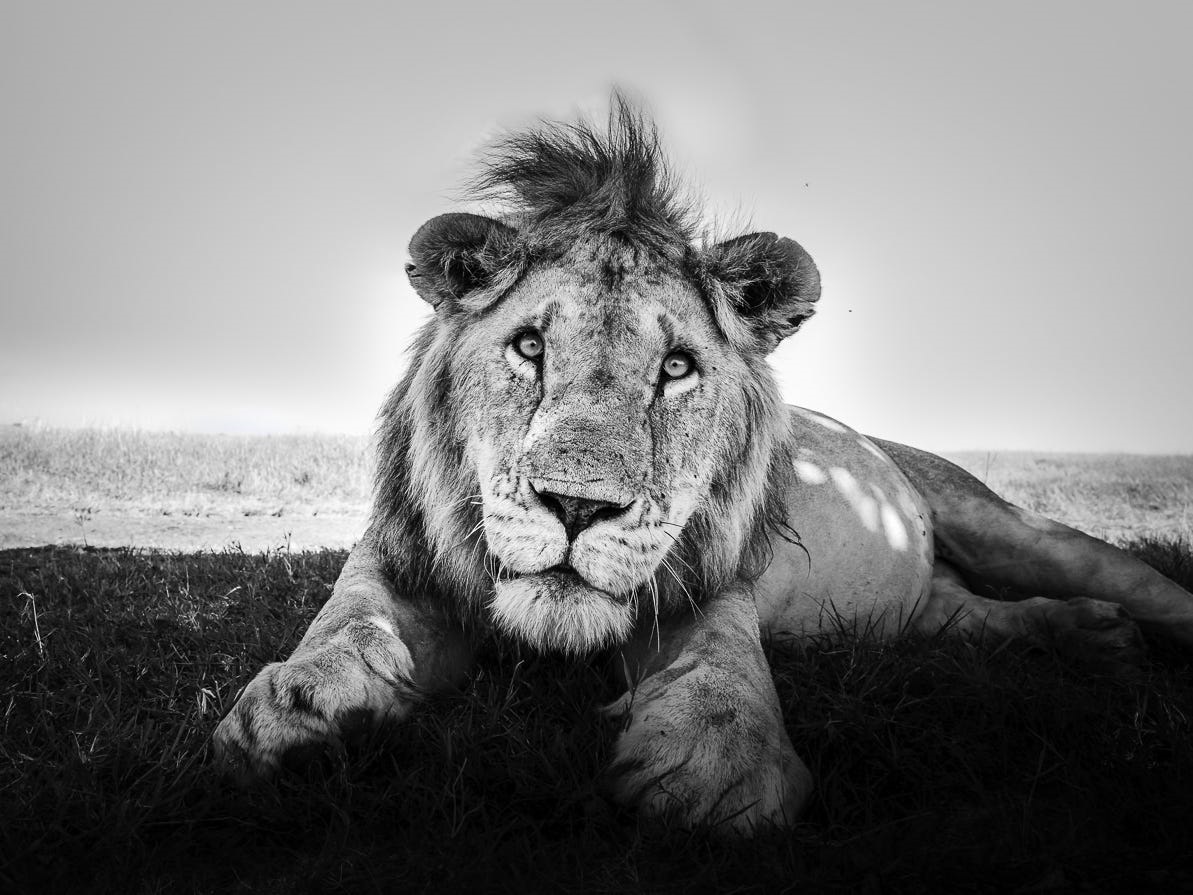 Purdy had added Kevlar to the remote-controlled car for protection, forming a device similar to a makeshift bomb disposal robot that he called the G train.

He had to take the doors off his safari vehicle to fit the device in the car. When he saw the group, Purdy decided to deploy the remote-controlled device, but the smell of the Kevlar alerted the lionesses. They were soon circling the safari vehicle like sharks.

"It was the only time ever I said to the driver, 'Look we need to go. We need to back up here. We need to give the cats a little bit of space because they're really not happy,'" Purdy said.

Dubbed the Ridge Pride, these lions were always together. 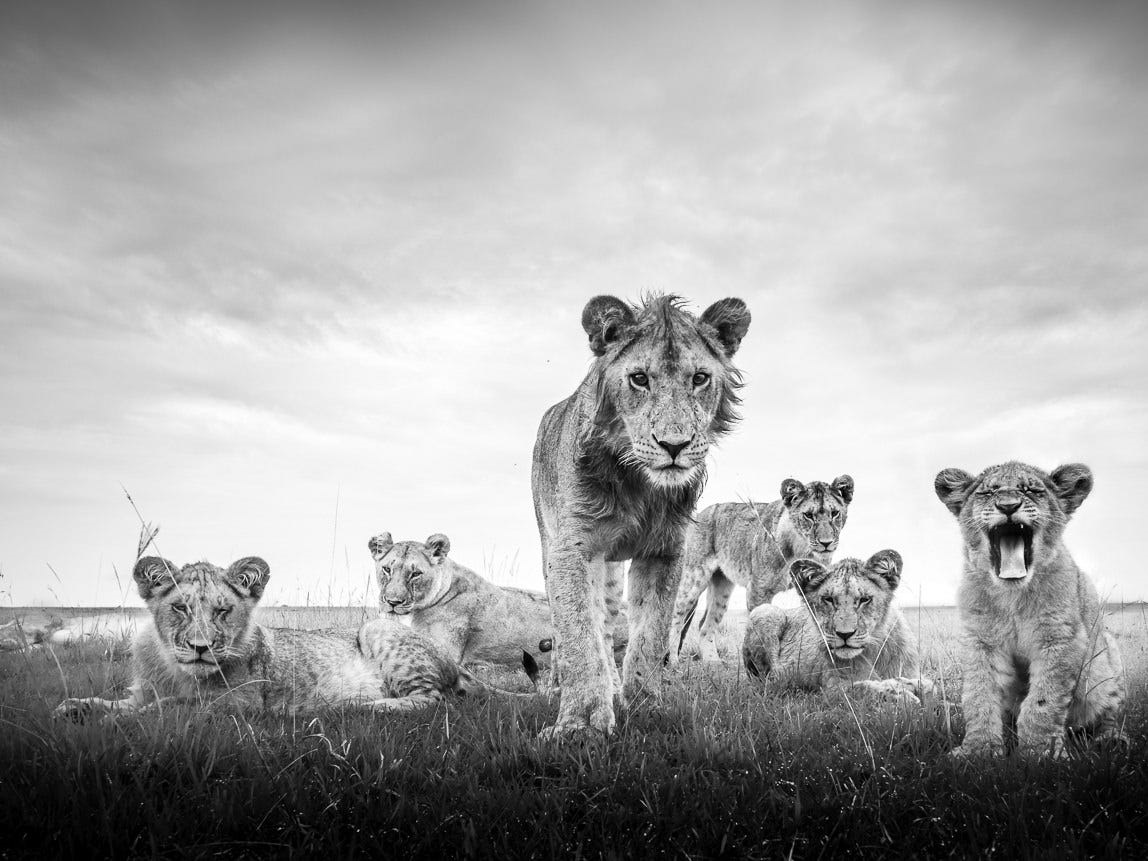 "The Ridge Pride were a really stable lion pride and they always kind of hung together," Purdy said. "Prides can be quite spread out over large areas, but they always seemed to be together and really photogenic."

When he came back three months later, Purdy found that all of the pride's cubs except one had been killed by other lions. "The males, one of them had died of natural causes," Purdy said. "The other one had been chased away. Six new males had moved into the pride and killed all the cubs. I don't usually tell people, but every lion cub in the book apart from one — I call him Survivor — all the others were killed."

Since then, Purdy said the Ridge Pride has thrived and that eight new cubs have been born: "It's kind of the circle of life."

While gorillas are potentially dangerous, Purdy said they are mostly peaceful and docile creatures. 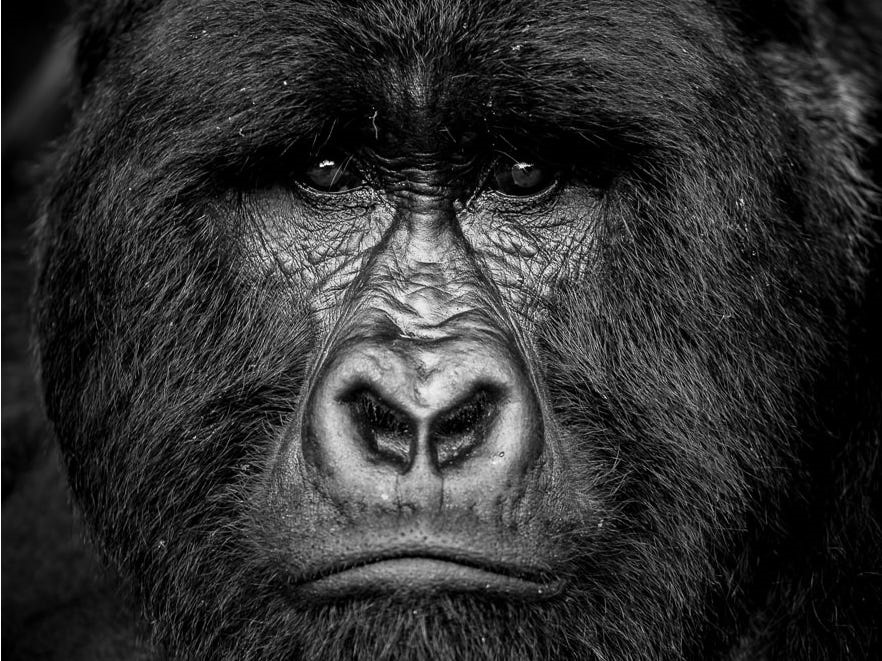 "This is the difference between animals that are potentially dangerous and animals that are dangerous. The difference is intent," Purdy said. "A gorilla could just rip your limbs off, I mean literally just rip you to pieces. But when you're with gorillas, you never get the impression that's what they want to do. They're so gentle and so trusting."

In order to see a gorilla, a person must slowly gain their trust. When visiting the gorillas, Purdy had a very small window to get the shot he wanted. "Every gorilla will take a look at you," Purdy said. "It actually only happens once. They kind of look at you a little bit like someone walking into a room."

On the last day of his photo shoot, Purdy said, the gorillas started pulling branches effortlessly from trees. They meant no danger, instead they were showing off to see who was the strongest.