The writer of a popular self-care Twitter account revealed he's been pretending to be a black woman online, and people are angry @emoblackthought is a popular Twitter account with more than 165,000 followers. It espoused self-care and self-love, and was followed by celebrities, including Megan Thee Stallion, who connected with the warmth and humour of the anonymous black woman named Nicole who ran the account.

Except she didn't exist.

On Friday, 23-year-old Texas State University graduate Isaiah Hickland revealed via YouTube and in a Paper magazine article that he was actually the voice behind the account, shocking loyal followers who say they feel duped and deceived.

Hickland's Twitter odyssey began nearly four years ago, when he posted under the handle @madblackthot. That account was suspended over a copyright infringement issue in 2017. According to a 20-minute YouTube video he posted, titled "My Reveal," he then took the handle @emoblackthot over from a friend of friend.

bank account was looking cute then i paid rent pic.twitter.com/TEYuuy5s2L

Hickland said in the video the anonymous account was a way for him to support social justice issues and express his truth as a bisexual black male. But because the account often spoke about and offered advice on female-specific issues - and because he referred to himself as Nicole - his audience assumed he was a woman. Hickland obliquely addressed the lie in both his YouTube video and on his Twitter.

"To black women: I want to sincerely apologize. the intention of my actions doesn't matter, the impact & how they make you feel does. I take full accountability for my actions and I'm sorry," he wrote on Twitter.

Fans and followers of the account called Hickland out for the depths of his deception, noting that he regularly made recommendations to readers on how to handle their periods and kept the ruse up via DMs and group chats.

EmoBlackThot was a man the entire time pretending to be a woman for clout. Telling ppl what vitamins to use for periods and shit......men are so odd and clout is a helluva drug.— avatarcmoney parody acct (@notavatarcmoney) October 11, 2019

Many say they feel betrayed because Hickland's account took attention and space away from black women, and are frustrated that, when confronted about his identity in the past, Hickland chose to lie.

emoblackthot gave that page to Isaiah Hickland. After I called Isaiah out for tweeting way too similarly to emoblackthot, she (emo) DMâ€™d me saying she manages that account.

i just donâ€™t understand why @emoblackthot would lie about being a black woman? you can advocate for us without catfishing. — ?? (@cherubporn) October 11, 2019

Fans were also skeptical of Hickland's motives for revealing his identity. In the YouTube video, dubbed "My Reveal," Hickland notes that he'd "like to get back into film" and is seeking a manager and agent.

The worst part is that after emoblackthot pretended to be a black woman and gained fame off being relatable [to other black women], he revealed himself only because he wants that fame to his name and face. This reveal wasnâ€™t genuine or out of a guilty conscience. — ann (@cIearitout) October 11, 2019

Hickland said in his YouTube video he hoped the good deeds he'd accomplished via the account wouldn't be diminished because "I hid behind the facade for so long."

"This is me saying that I'm sorry to everyone I lied to - everyone I hurt and everyone angry with me for my actions," he told Paper. "I f----- up, and I take full accountability for that. [But] now I want to move forward with my life, leave 'EmoBlackThot' in the past forever, and move on as myself. As Isaiah Hickland."

The @emoblackthot account appeared to be deleted as of late Friday afternoon. 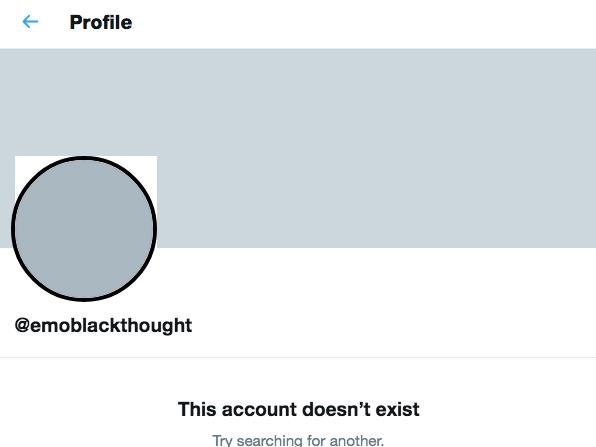 Insider has reached out to Isaiah Hickland for comment.