Screenshots from videos of the pig after it was pushed off the bungee jump platform.

A Chinese theme park made a live pig bungee jump to open its new attraction and try to attract visitors.

The Meixin Red Wine Town theme park, in Chongqing, south-west China, strapped the pig to a cord and dropped it from a 68 metre tower on Saturday, the BBC reported.

Video footage shared online shows the pig dropped, squealing from the tower, as well as footage of the pig being dragged to the drop point.

Separate video shared by Chinese state outlet Global Times showed the pig dropped while squealing from the tower, where it bounced multiple times on the chord as it continued to squeal.

The video also included footage that appears to be from before the jump, where the pig is clipped in to the jumping apparatus.

People cheer as the pig is dropped, and an announcer narrates what is happening.

The theme park said the event was held to mark the opening of the new bungee attraction, the BBC reported.

And Hong Kong-based outlet the South China Morning Post reported that a park spokesperson called the event "just a bit of entertainment" and said that the animal was due to be killed anyway to eat during Chinese New Year celebrations.

It also cited the theme park's owner, who was not named, as joking about the event.

"It's our opening day today. We let the pig make the first jump because pork prices have been very high this year and recently they dropped a bit," the owner was quoted as saying.

SCMP noted that Chinese pork prices had soared after an outbreak of a swine disease resulted in the slaughter of millions of pigs, but that prices fell slightly between November and December. 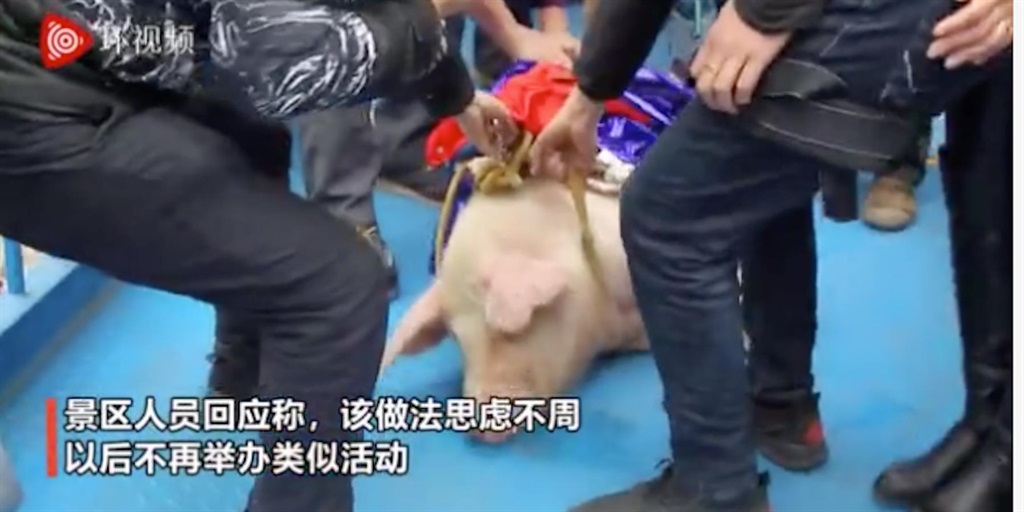 A screenshot of the video of the pig, seemingly before the jump took place.
Screenshot/Global Times

And the Global Times quoted an unnamed camera man for the theme park, who said: "A pig bungee jumping is odd and attracts tourists and local residents to our site."

The event was met with criticism on social media in China.

One person wrote on social media platform Sina Weibo: "It was miserable for the animal! It's a disgusting marketing idea to attract attention by abusing a pig!," Global Times reported.

And another person wrote on Weibo, according to SCMP: "I don't see anything funny in it. Why were there people laughing? Just because the animal can't express fear doesn't mean it is not afraid."

"To tie up its boss and throw him down would be much more entertaining," they said.

But the park later acknowledged the criticism in a statement, the BBC reported.

"We sincerely accept netizens' criticism and advice and apologise to the public," it said. "We will improve [our] marketing of the tourist site, to provide tourists with better services."

Global Times also cited a spokesperson as describing the event as an "ill-conceived activity aimed to pray for pork prices to take a dive."

The spokesperson said the pig was sent to a slaughterhouse after the event.