New, detailed pictures of planets, moons, and comets are neither photos nor animations — they're made using data from 50 years of NASA missions For many years, there were only two ways for astronomers to see distant worlds in our solar system: Either they used a powerful telescope, or they sent spacecraft into the inky blackness to get up close and personal.

But a third option is emerging to offer unprecedented detail and accuracy: data visualisation.

At the American Museum of Natural History, a new planetarium show reveals images of Saturn's moon Titan, the 67P comet, and the lunar surface, all generated using data collected during 50 years of space missions.

"We're not making anything up here," Carter Emmart, director of astrovisualisation for that show, said at a press conference. "The height, colour, and shapes we see come from actual measurements. You get to see these beautiful objects as they actually are, to the best of our abilities."

Carter and his team relied on data gathered by robotic probes, telescopes, and supercomputer simulations from NASA, the European Space Agency (ESA), and Japan Aerospace Exploration since the 1970s.

"We're taking numbers and turning that into a picture," he told Business Insider. "We've created a 3D world that lives in the computer and can be shown on screen."

Take a look at some of the most impressive visuals from the show,"Worlds Beyond Earth," which opened Tuesday.

"It's not an animation or cartoon," Vivian Trakinski, the new show's producer and director of science visualisation, said. "These are authentic digital artifacts of science we can create and experience." Other planetariums, like Chicago's Adler Planetarium, also utilise data visualisation, relying on research about planetary orbits, surface maps, and the location of spacecraft to create accurate imagery. But the Hayden Planetarium in New York displays the most comprehensive colour palette.

Data from robotic missions like the Apollo 15 lunar module, called "Falcon," helped reveal what the moon's surface looks like in staggering detail. In 1971, "Falcon" carried astronauts David Scott and Jim Irwin, along with the first Lunar Roving Vehicle, down to the moon. That so-called "moon buggy" helped Scott and Irwin explore a much wider swath of the lunar surface.

"Spacecraft are extensions of ourselves: our eyes, ears, and nose," the show's curator, Denton Ebel, told Business Insider.

Ebel and his colleagues also relied on high-resolution maps from NASA's Mars Reconnaissance Orbiter and Mars Global Surveyor, as well as the ESA's Mars Express, to reconstruct Mars' surface.

The red planet was once akin to Earth, with plentiful water and active volcanoes. But the planet's core cooled just 500 million years after Mars' formation. That cooling, according to museum scientists, caused the decay of Mars' magnetic field, which protected the planet from solar winds. Without it, Mars lost its atmosphere.

Between 1989 and 1994, NASA's Magellan mission explored the surface of Venus. According to Ebel, Magellan revealed that Venus was also once like Earth but now has a surface hot enough to melt lead.

Venus is a "hellscape, really," Ebel said, because it, too, lacks a magnetic field. Without that protection, solar winds stripped away any water.

Cassini was one of NASA and the ESA's most ambitious missions. The spacecraft orbited Saturn 294 times, exploring the planet's rings and moons for 13 years. Cassini discovered that Saturn's moon Enceladus sprays plumes of water into space. That told scientists that the moon has an ocean of liquid water under its icy surface.

Cassini also carried the Huygens probe, which landed on the surface of Saturn's largest moon, Titan. Titan boasts a thick atmosphere and weather. But it's too cold to hold liquid water; its lakes and rain are made of liquid methane. Saturn's rings bubble with moonlets: house-sized baby moons that form as space dust coalesces. Ebel said the process by which these moonlets were born parallels how all eight planets in our solar system formed 4.5 billion years ago.

Similarly, our solar system started as a cloud of gas, ice, and dust. Gravity caused this cloud to collapse, forging a central star — the sun — and a swirling disc of debris. Planets formed within this disk - which resembled Saturn's rings - as did moons, comets, and asteroids. Then eight planets (along with dwarf planet Pluto) grew as they incorporated more material.

The museum's new data visualisations also reveal the surface of Jupiter's moon, Io, which boasts volcanoes so powerful they can be viewed via telescopes on Earth. In 1979, NASA's Voyager I mission took snapshots of Io, revealing the moon to be the most volcanically active object in the solar system. Some of Io's volcanoes spew lava dozens of miles into the sky; its surface is peppered by lakes of lava.

"We're vicariously visiting these places with our robots, and that's as close as I personally want to get," Ebel said. The largest planet in our solar system, Jupiter has hot, liquid, metallic hydrogen churning around its rocky core. That generates a powerful magnetic field.

One of Jupiter's moons, Ganymede, also has such a field.

Missions to comets have also unraveled secrets of our solar system. In 2014, the ESA's Rosetta probe landed on a comet 372 million miles from Earth. 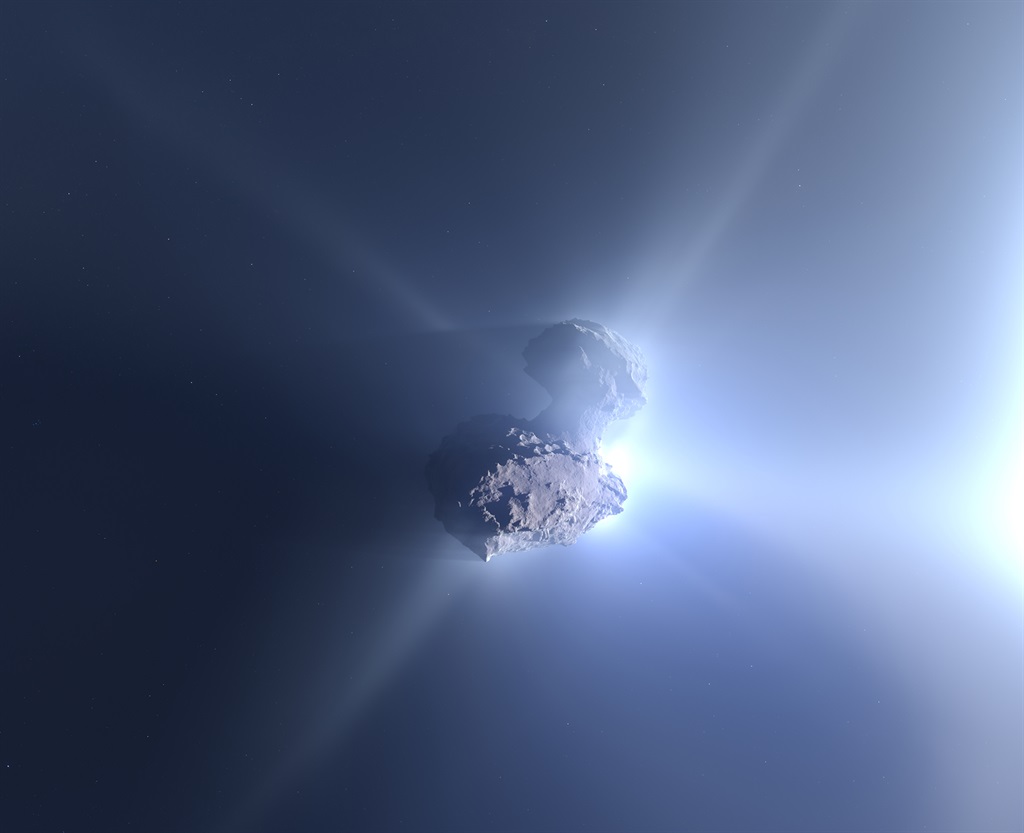 The comet, called 67P/Churyumov-Gerasimenko, is only a few kilometers across, but it contains frozen water, dust, and amino acids - the basic chemical building blocks of life.

When comets collided with planets and moons earlier in the solar system's history, some delivered life-giving chemicals like phosphorus.

It took Rosetta 10 years to reach 67P, enter its orbit, and send a lander down to the surface.

"The ability to construct what something looks like without having been there is the next frontier of space exploration," Carter said. He added that production work on the "Worlds Beyond Earth" show lasted a full year so that the team could "make damn sure that every bit of space that we're putting up there on the screen is accurate to the best of our knowledge."