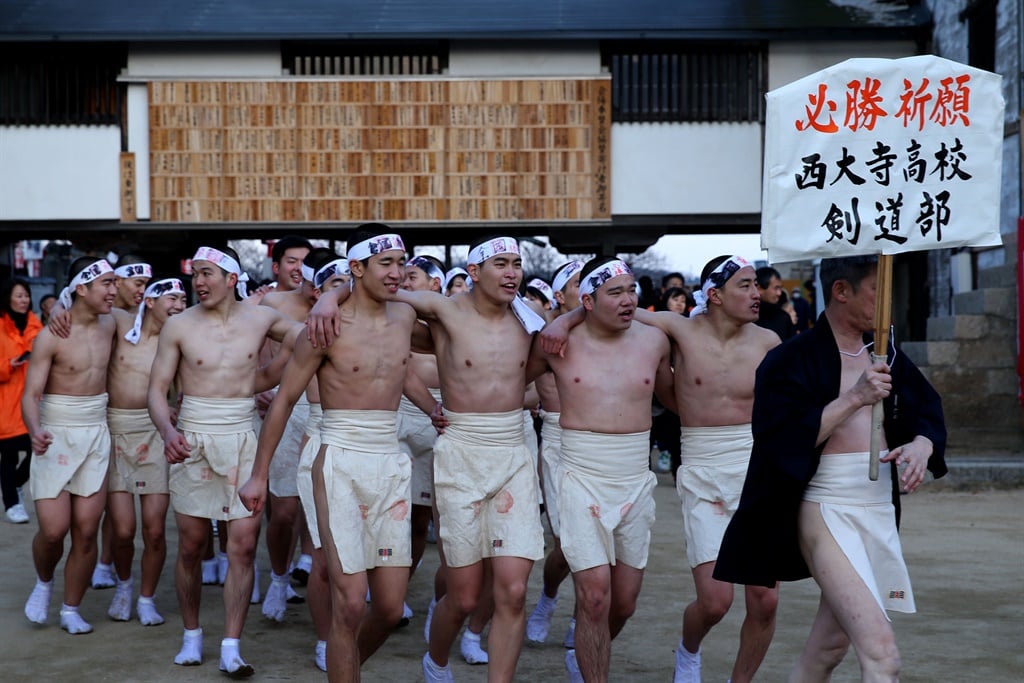 Team of participants arrive to take a part at the Naked Festival, or Hadaka Matsuri at Saidaiji Temple on February 16, 2019 in Okayama, Japan. Approximately 9,000 men dressed only in loincloths in freezing temperatures battled to grab a pair of sacred wooden sticks (Shingi) thrown by a priest at this vibrant Japanese festival. The sacred wooden sticks are guaranteed happiness and good fortune for the rest of the year. (Photo by Buddhika Weerasinghe/Getty Images)

Stripping down to fight over a stick might not be everyone's cup of tea - but it was for thousands of men in Japan determined to have good luck for a year.

About 10,000 men came together for the annual "naked festival" at Saidaiji Temple in Okayama, on the island of Honshu in Japan on February 15, according to Reuters. At the festival, a Shinto priest tossed the stick - called a "shingi" - into the air, and the men then fought to claim it.

CNN reports the festival, officially known as Hadaka Matsuri, goes back about 500 years, when men at the temple would fight over paper talismans believed to bring good luck.

While fighting for the shingi, the men wear just two garments: a traditional Japanese loincloth called a "fundoshi," and a pair of white socks, known as "tabi."

Okayama's official tourism body states the festival has been designated an "Important Intangible Folk Cultural Asset," and is held each year on the third Saturday in February.

Prior to the battle over the shingi, which took place about 10 p.m. local time, there was a fireworks show and traditional dancing.

This year's festival went ahead despite fears of the spread of coronavirus, now officially known as COVID-19, according to Yahoo News Australia.

CNN reports that more than 600 people in Japan have tested positive for COVID-19, including more than 450 people aboard the Diamond Princess cruise ship, currently anchored at Yokohama Port, near Tokyo.

The COVID-19 outbreak has caused other large gatherings around the world to be canceled.

Earlier in February, it was announced the Mobile World Congress, scheduled for February 24-28 in Barcelona, would not be taking place, after numerous participating companies pulled out due to COVID-19 fears, according to the BBC.