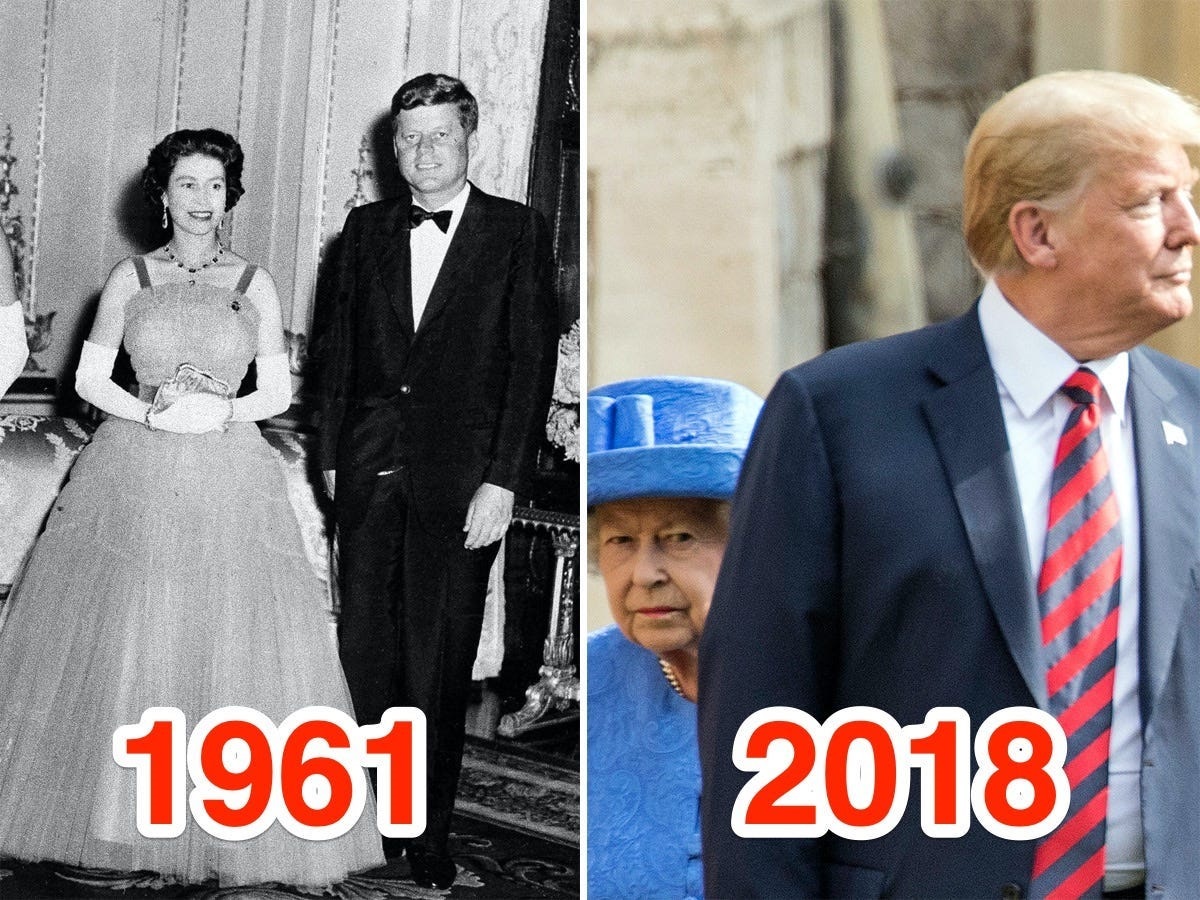 The Queen met President Harry Truman when she was still a princess on October 31, 1951.

The Queen, then Princess Elizabeth, and her husband, the late Duke of Edinburgh, traveled to North America for a Canadian tour in 1951.

They met Truman at the Canadian Embassy in Washington DC on November 1, 1951, where they hosted him for dinner.

President Eisenhower hosted the monarch in the US for her first state visit as the Queen on October 17, 1957. Although their first meeting was in the US, President Eisenhower wore the British Order of Merit award that King George VI, the Queen's father, gave to him after World War II during his dinner with Queen Elizabeth.

The duo had a close relationship, as Insider previously reported. The Queen once shared her recipe for grilled scones with Eisenhower. President Kennedy was the first US president to meet Queen Elizabeth at Buckingham Palace, when the Queen and Prince Philip hosted the president and first lady for dinner in 1961, according to the US Embassy and Consulates in the UK.

The Queen was reportedly jealous of the attention Jacqueline Kennedy Onassis received during her trip to the UK, as The Washington Post reported.

The meeting was the subject of an episode of Netflix's "The Crown."

Queen Elizabeth's first meeting with Richard Nixon after he became president was on February 15, 1969. The pair were first introduced when Nixon was President Eisenhower's vice president, as Time reported, but they met as leaders of their countries at Buckingham Palace a few months after he was elected.

The president reportedly tried to set his daughter up with Prince Charles throughout his presidency. The Queen came to the US during the Bicentennial Celebrations of the Declaration of Independence, according to the Gerald R. Ford Presidential Library and Museum.

President Gerald Ford and first lady Betty Ford, hosted the Queen and Prince Philip for dinner. The dinner took place under a grand tent, and the Queen and Ford shared a dance during the evening.

Betty Ford documented the visit in her memoirs, writing, "If I hadn't kept mixing up Your Highness and Your Majesty (he's His Highness, she's Her Majesty) I'd give myself four stars for the way that visit went off," as documented by the Ford Presidential Library.

President Jimmy Carter had an etiquette blunder when he met the Queen, Prince Philip, and the Queen Mother on May 7, 1977. The Queen first met President Carter during her visit to the US for the Bicentennial celebrations, but she was re-introduced to him as the president in 1977, according to the US Embassy and Consulates in the UK.

He came to Buckingham Palace for dinner, and when President Carter was being introduced to the Queen Mother, he kissed her on the lips, breaking royal protocol, according to the BBC.

"I took a sharp step backwards – not quite far enough," the Queen Mother said of the encounter, according to the BBC.

President Ronald Reagan was the first US president to stay the night at Windsor Castle on June 8, 1982. 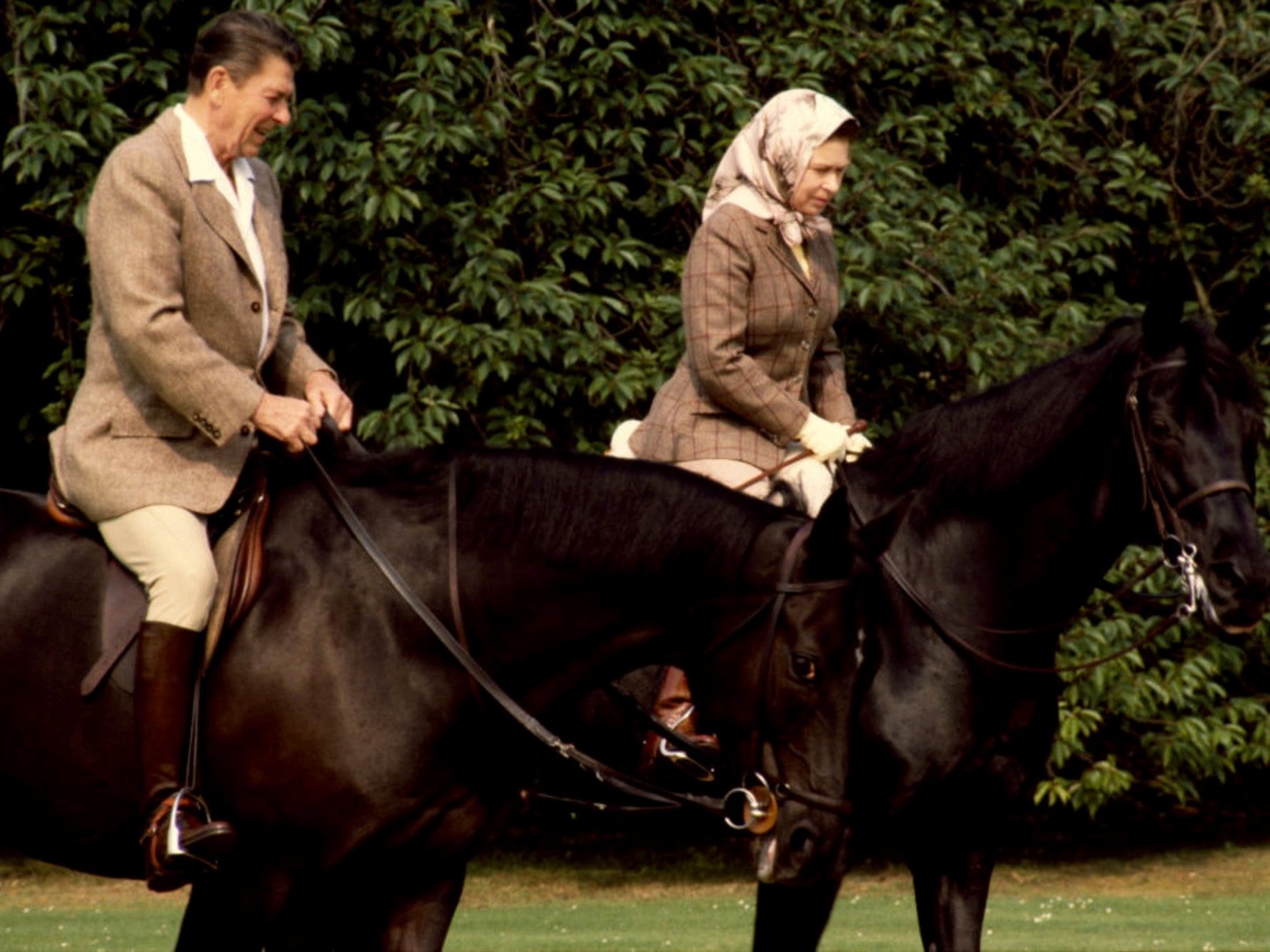 Queen Elizabeth II and President Ronald Reagan riding through the grounds of Windsor Castle on the morning of June 8, 1982.
David Levenson/Getty Images

President Ronald Reagan and his wife Nancy Reagan stayed with Queen Elizabeth at Windsor Castle in June 1982, according to the US Embassy and Consulates in the UK.

Reagan and the Queen developed a close relationship during his presidency, bonding over their love of horses.

During the 1982 visit, Reagan and the Queen rode through the Windsor estate for an hour.

The Queen later granted Reagan an honorary knighthood in 1989, according to the AP.

The Queen hosted lunch for the couple at the time.

Two years later, George H.W. Bush took the Queen to a baseball game in the US.

President Bill Clinton and Queen Elizabeth met at a dinner for the 50th anniversary of D-Day on June 4, 1994.

The dinner was in Portsmouth, England. 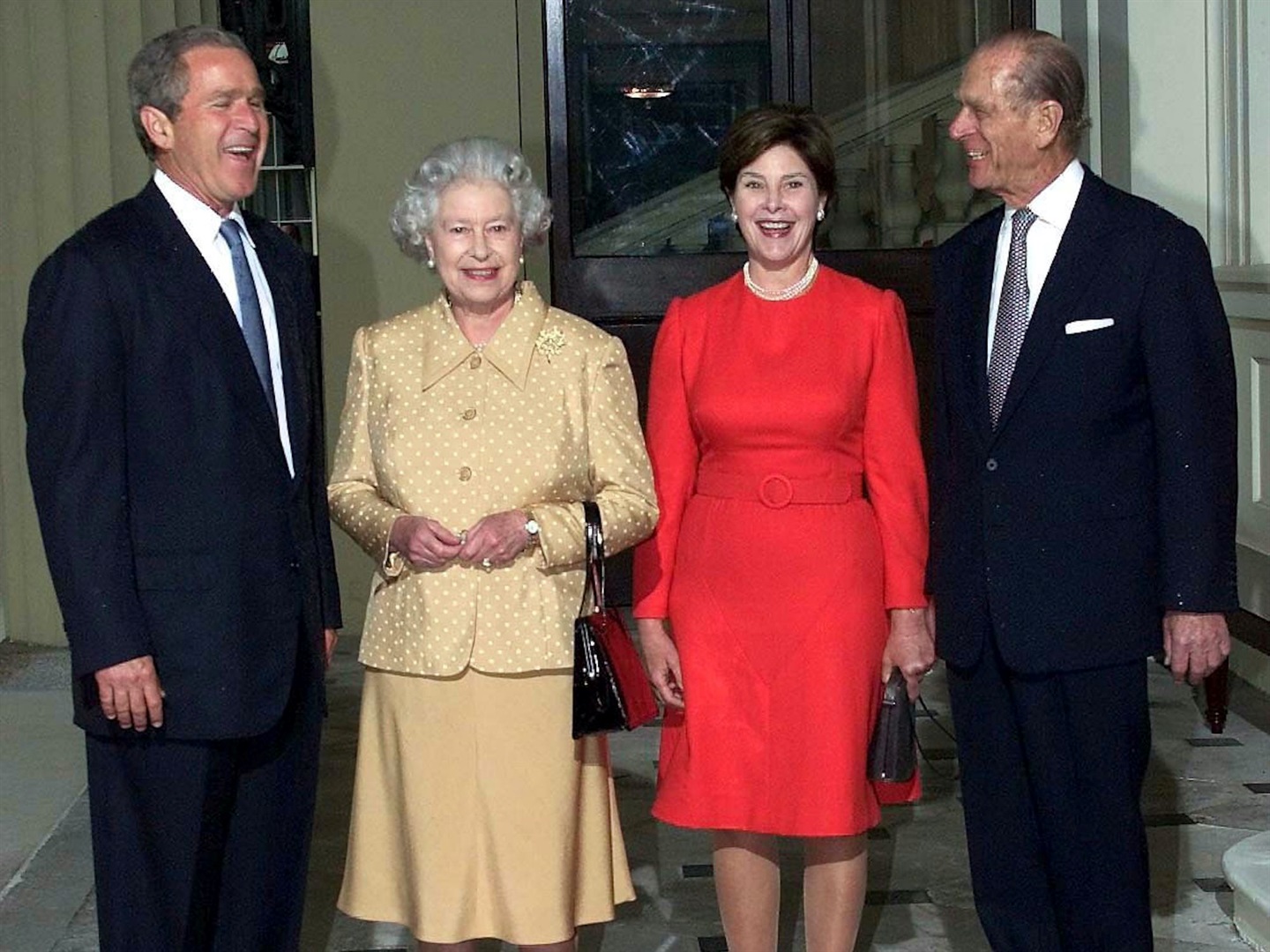 The Queen and Duke of Edinburgh hosted the president and first lady for lunch on July 19, 2001, at Buckingham Palace, according to the US Embassy and Consulates in the UK.

President Bush later returned to the UK in 2003, making him the first US president to make an official state visit to the country, according to Time.

President Barack Obama and first lady Michelle Obama were introduced to Queen Elizabeth on a state visit to the UK on April 1, 2009. The Queen and Prince Philip hosted President Obama and Michelle Obama at a reception at Buckingham Palace.

President Obama brought the Queen an iPod with videos of her visits to the US on it.

Michelle Obama revealed in her memoir "Becoming" that she violated royal protocol by hugging the Queen in a friendly gesture, but the Queen politely returned the gesture, Harper's Bazaar reported.

President Trump met Queen Elizabeth at Windsor Castle in 2018, and he broke royal protocol multiple times during the visit, as Insider previously reported.

He was late to the visit, shook the Queen's hand instead of bowing to her, walked in front of her, and turned his back towards her — all of which would be considered faux pas according to the royal family's etiquette.