Thousands of metres under the waves, in the darkest parts of the ocean, carnivorous giant squids hunt with long, grasping tentacles, chomping on prey with ferocious beaks.

Because the squids almost never leave those crushing depths, scientists know very little about them. That's part of the reason the mysterious creatures have inspired tales of the kraken: a legendary sea monster that attacks ships and pulls them underwater.

Most of what we know about the giant squid comes from carcasses that wash ashore, or from digested squid appendages found in sperm-whale stomachs (the squid's main predator).

Often these remains are piecemeal, so researchers don't have much to study. But on 7 June, a nearly intact giant squid washed ashore in South Africa, offering biologists a golden opportunity to glean further insights into the creatures' anatomy and sample some rare DNA.

Researchers at the Iziko Museums of South Africa collected the nearly 14-foot-long (4 metre) squid and brought it back to the museum for preservation.

These photos from that effort reveal the creature's size and impressive tentacles.

Vacationers Adéle Grosse and her husband, who were visiting Britannia Bay, found the giant squid on 7 June, while walking on Golden Mile Beach. When they found the creature, it was already dead.

"We looked for bite marks or injuries and could not really find anything," Grosse told Live Science.

Another beachgoer, Richard Davies, said he captured footage of the squid's dying breaths after he was unable to roll it back into the ocean.

"It was still pumping out ink and I touched one of its tentacles, which sucked onto my hand, and I actually had to use some force to remove it," he told News24.

After posting photos to her social media, Grosse got in touch with Wayne Florence at the Iziko Museums. Museum researchers then collected the squid and transported it to Cape Town. Florence and his colleagues collected the creature's DNA and are temporarily storing it at minus 30 degrees in a walk-in freezer facility.

Once the country's coronavirus lockdown ends, they plan to preserve the squid long-term in a giant stainless steel tank filled with ethanol.

This is the 20th squid to join the museum's wet collection. It's unusual for the animals to get stranded on shore like this, Florence said. 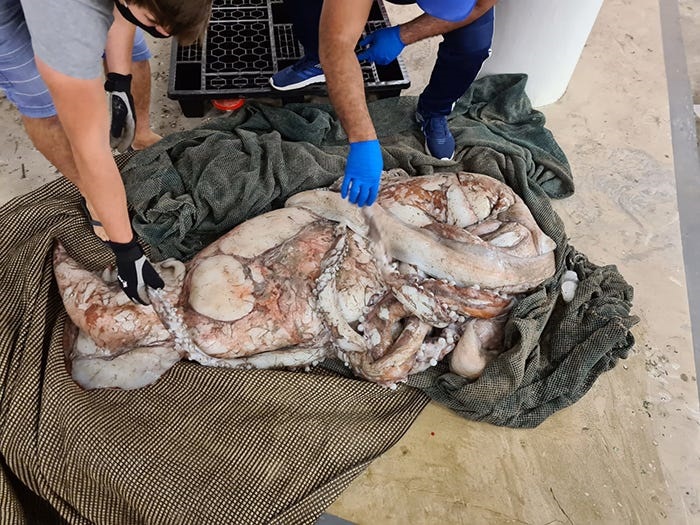 "It's rare. In South Africa, we have had less than a handful of strandings. Surprisingly, despite our museum being almost 200 years old, our earliest stranded giant squid specimen is from 1972," he told News24. Sightings are so rare, in fact, that scientists for a while thought the moniker "giant squid" comprised several species.

But a 2013 study based on DNA analysis of 43 squid specimens from around the world revealed they were all part of the same species: Architeuthis dux.

If, however, the DNA from this new squid doesn't match that of Architeuthis dux, it could throw cold water on the single-species theory.

The largest giant squid ever found was almost 45 feet (13 metres) long — about the length of a school bus — and weighed nearly a ton. 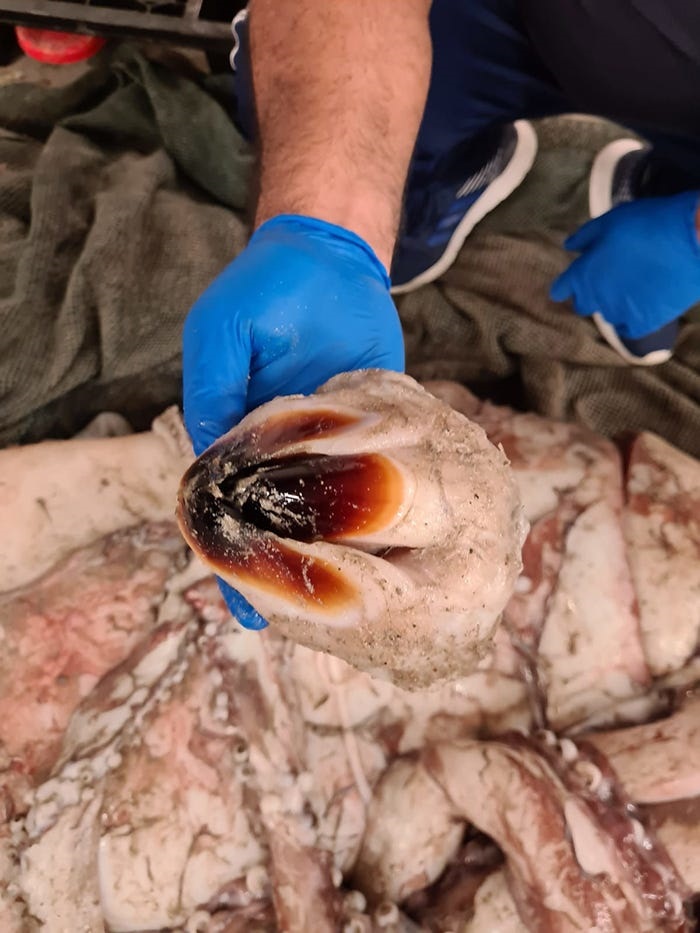 According to Grosse and Davies' estimates, this new squid was 13.7 feet (4 metres) long and weighed at least 660 pounds. The smaller size suggests this squid was fairly young - scientists can estimate its age using the squid's length and beak size.

From studying carcasses like these, scientists have learned that all giant squids have eight arms and two long feeder tentacles. 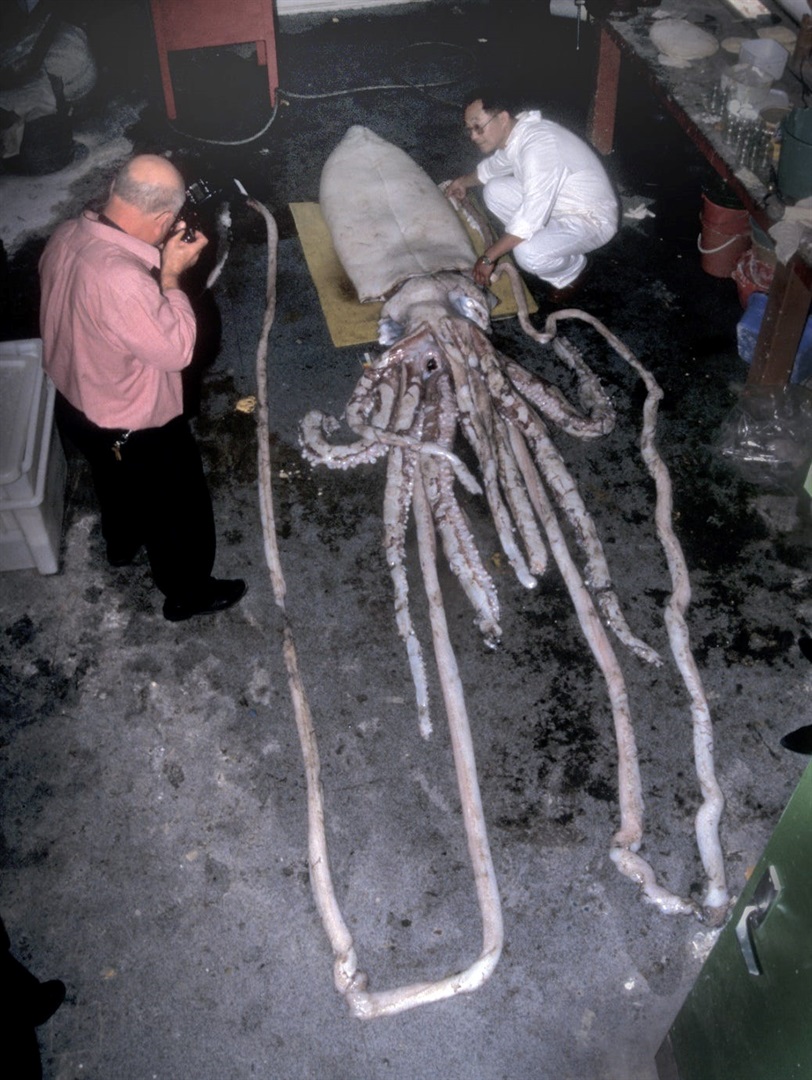 These tentacles help the squid pull prey from more than 30 feet (9 metres) away into its gaping maw. It uses its beak to chomp prey into bite-sized chunks.

Each appendage is covered in sharp-toothed suckers that latch onto fish, jellyfish, other squid, and even whales. Like other squids and octopi, giant squids have ink sacs and can squirt ink to deter predators.

Based on the beaches where carcasses have washed ashore, giant squids are thought to swim in oceans all over the world. The elusive denizens prefer deep water, since their meter-wide, dinner-plate-sized eyes enable them to spot prey in almost complete darkness.

They almost never leave the icy depths of their habitat, up to 3,300 feet (about 1,000 metres) beneath the waves.

It wasn't until 2012 that scientists from Japan's National Museum of Nature and Science filmed a giant squid in its underwater habitat for the first time. Tsunemi Kubodera of the National Science Museum of Japan, HO/AP

The researchers filmed it nearly 3,000 feet (914 metres) deep in Japan's Ogasawara archipelago by using flashing lights to imitate other bioluminescent creatures of the deep.

Researchers on a National Oceanic and Atmospheric Administration expedition captured a stunning video of this squid in the Gulf of Mexico, 100 miles (160km) southeast of New Orleans.