This abandoned hotel in Croatia was once so luxurious that its swimming pool was reportedly filled with champagne. Here's what it looks like today. In the summer of 1972, the Haludovo Palace Hotel on Krk, Croatia, opened its doors to the wealthiest of the west. Hostesses known as "pets" served endless supplies of champagne, caviar, and lobsters to guests as they sunbathed under the sun, and the owner of "Penthouse" magazine poured $45 million into the resort to build a casino.

But a year later and suffering from a lack of foreign visitors, it faced financial struggles. The Haludovo Palace Hotel toned down its extravagance and continued hosting guests until civil war broke out in 1991. Suddenly, the entire resort was filled with refugees and every last appliance and piece of furniture was stolen.

While the hotel's foundation is still intact, there have been no plans to redevelop it. What was once an extravagant getaway in the '70s is now an eerie shell of a resort.

The Haludovo Palace Hotel opened its doors in the summer of 1972 in former Yugoslavia. The Haludovo Palace Hotel was built in the Croatian town of Malinska on the island of Krk, just south of the mainland. It was directly across from Venice and quickly became a premier destination for warm weather, beautiful rocky beaches, and luxury cuisine.

Unlike other Eastern European countries under Soviet rule, Yugoslavia had laws that allowed for foreign investments in casinos and gambling. The catch was that only foreign tourists could take part in gambling, not Yugoslavian residents. This placed increased pressure on casinos to attract wealthy westerners.

Bob Guccione, the founder of "Penthouse," an adult-themed magazine, pounced at the opportunity to expand his brand into hospitality. He threw $45 million at the Haludovo Palace Hotel and it opened the Penthouse Adriatic Club, which included a casino. The casino was predicated to compete with Las Vegas and attract the wealthiest tourists.

Guccione wanted to show that tourism could be a gateway to improving conversation between the Soviet Union and the rest of the world. "Through the realisation of this project, the Penthouse Adriatic on Krk, we have the opportunity to start a big process of re-education: We have become partners in removing doubts and ignorance," Guccione said around the time of the opening. He hoped tourism would open up communication and rid travelers of stigmas surrounding the Soviet Union.

Upon opening in the summer of 1972, the hotel provided guests with a luxury experience featuring bowling, tennis courts, and indoor and outdoor pools. The resort also had lush gardens, like those pictured above along the Croatian coast.

The hotel used "Penthouse Pets" as hostesses. They assisted guests with gambling, refilling champagne glasses, and serving pounds of lobster and caviar.

Unfortunately, less than a year later, the Penthouse Adriatic Club was bankrupt. The hotel was not attracting as many wealthy westerners as it needed to sustain itself, and a new owner took over. The hotel toned down its extravagance but still maintained its reputation as a high-end resort and hosted prominent guests, including Saddam Hussein.

In 1991, civil war broke out and the hotel was no longer an attraction vacation option for foreigners, and it was forced to close. Refugees began using the entire hotel as a base. Furniture and appliances were stolen from the rooms.

Following the war, an Armenian-Russian businessman, Ara Abramyan, bought the hotel, which was now in complete shambles. Two Croatian presidents begged Ara Abramyan to bring the hotel back to life, but it remained in decay. By this time, the majority of the property was either completely overgrown or covered in broken glass.

To this day, the hotel is completely abandoned. The grand amenities hint at the luxury it once offered.

The hotel was so extravagant that one of the pools was reported to be filled with champagne. Now it's empty. 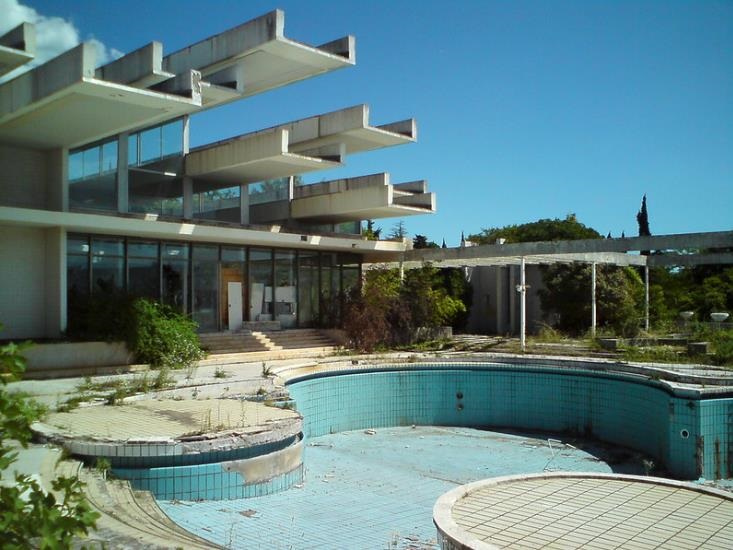 The circular seating plan in the lobby is still visible — but the cushions are nowhere to be seen. The large circle in the center was once a bar for guests sipping cocktails. Guests would be greeted with a glass of champagne from the circular bar as they arrived.

Skylights allowed light to flood the lobby during its heyday. The indoor pool area could get wild at night. Another bar was placed right by the indoor pool.

The hotel had glass walls so that guests could enjoy the view from anywhere on the resort. Now that glass is shattered. The hotel is covered in broken glass, as most of the windows have been shattered.

Most of the furniture was stolen during the civil war, but a few chairs and tables remain. Letters above the entrance to the main lobby are falling down. An outdoor pool bar is now covered in graffiti. An empty stairwell leads to the hotel rooms. This is all that remains of an abandoned hotel room. Most of the mattresses were stolen during the civil war.

The hotel's narrow elevators are out of order. Inside the sauna by the grand pool, tiles are falling from the walls. Light floods into the sauna room through skylights.

The hotel kitchen used to churn out lobster, caviar, and endless champagne, but now its halls are empty. The view is the only thing that remains beautiful. A lookout deck at the Haludovo Palace Hotel shows the stunning coastal views guests would have once enjoyed.