Tense meetings, protesters, and a surprise arrival: 7 photos (one featuring an ‘unidentified’ African leader) show how the first days of the G7 Summit played out The annual summit is taking place this year amid an escalating trade war between the US and China, Britain's planned exit from the European Union, and concern over fires that have devastated the Amazon rainforest in Brazil.

The first two days of the summit were filled with a flurry of reports on leaders' progress in confronting international affairs.

See some of the highlights from the summit below: Johnson and Trudeau discussed Canada's existing trade deal with the EU and how that would function in the future once Britain officially divorces from Europe.

It was the leaders' first sit-down meeting since Johnson assumed the role of Britain's Prime Minister in July.

French President Emmanuel Macron had lunch with US President Donald Trump Saturday, where Trump boasted of his and Macron's "special relationship." 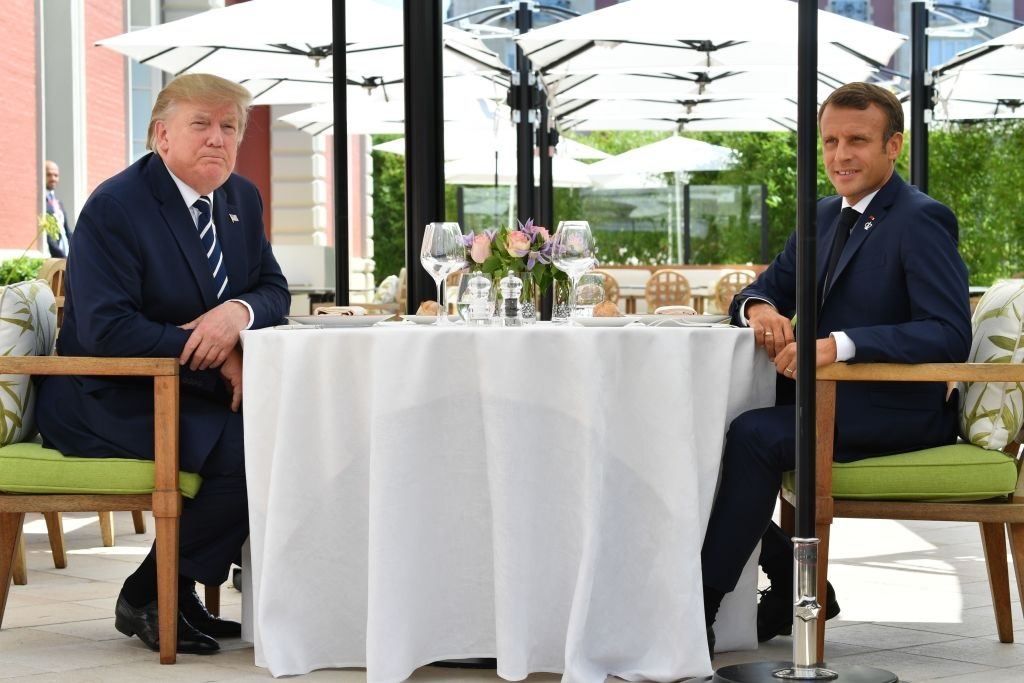 Sunday's agenda included a roundtable meeting that was deemed a Working Session on the Global Economy, Foreign Policy, and Security Affairs. As the meetings went on, French protesters took to nearby streets to slam Macron and demand more action on the climate emergency. Some carried portraits that they had illegally removed from town halls, held upside-down.

On Sunday, world leaders' spouses were away from international tensions as they enjoyed a cultural tour of the Basque region, enjoying wine, lunch, and traditional performances. Read more: The wives of G7 world leaders enjoyed the best French wine, peppers, and traditional dances while their husbands were at the tense summit

Sunday afternoon brought a surprise arrival from Iranian Foreign Minister Mohammad Javad Zarif, which appeared to be orchestrated by Macron. The Trump administration has objected to Macron's apparent efforts to force talks between the US and Iran, which Trump has called the "number one terrorist nation."

Trump told reporters he had "no comment" on Zarif's arrival.

On Sunday night, the leaders gathered with their spouses and guests for a group photo. Group photos are a tradition at the annual summit, and can sometimes illustrate the dynamics at play among the member leaders.

Judging from that photo, for instance, a new British prime minister may be looking to a "unidentified leader" for a trade deal. Though Boris Johnson seems to know who Cyril Ramaphosa is, his fame does not appear to have spread to the international press corpse in attendance.

See also: Cyril who? SA tweeps lose it as US reporter refers to Ramaphosa as 'unidentified leader'