A woman carrying dough to make tortillas walks by a sign in El Zonte announcing the acceptance of Bitcoin.
Camilo Freedman for Insider

This week, El Salvador became the first country to accept Bitcoin as legal tender. The rollout was far from smooth, and many people here remain sceptical.

The radical experiment was designed to dynamise the economy, and make it cheaper for three million Salvadorans living abroad to send remittances back home.

But in stores and at markets around the capital, San Salvador, the rollout was plagued with glitches. Those who tried to use Bitcoin, mostly to get the $30 (around R429) incentive from the government, found that the infrastructure that had cost millions in public spending was not functioning.

The new Bitcoin ATMs, which were meant to convert the cryptocurrency into cash, weren't working, and there were widespread problems downloading the Chivo crypto wallets. In the capital, 1,000 people took to the streets to protest, holding signs demanding that the government focus on El Salvador's real issues, like the increasingly high cost of living, human rights concerns, and an epidemic of disappeared women. People march while holding anti-bitcoin signs during a demonstration, in San Salvador.
Camilo Freedman for Insider 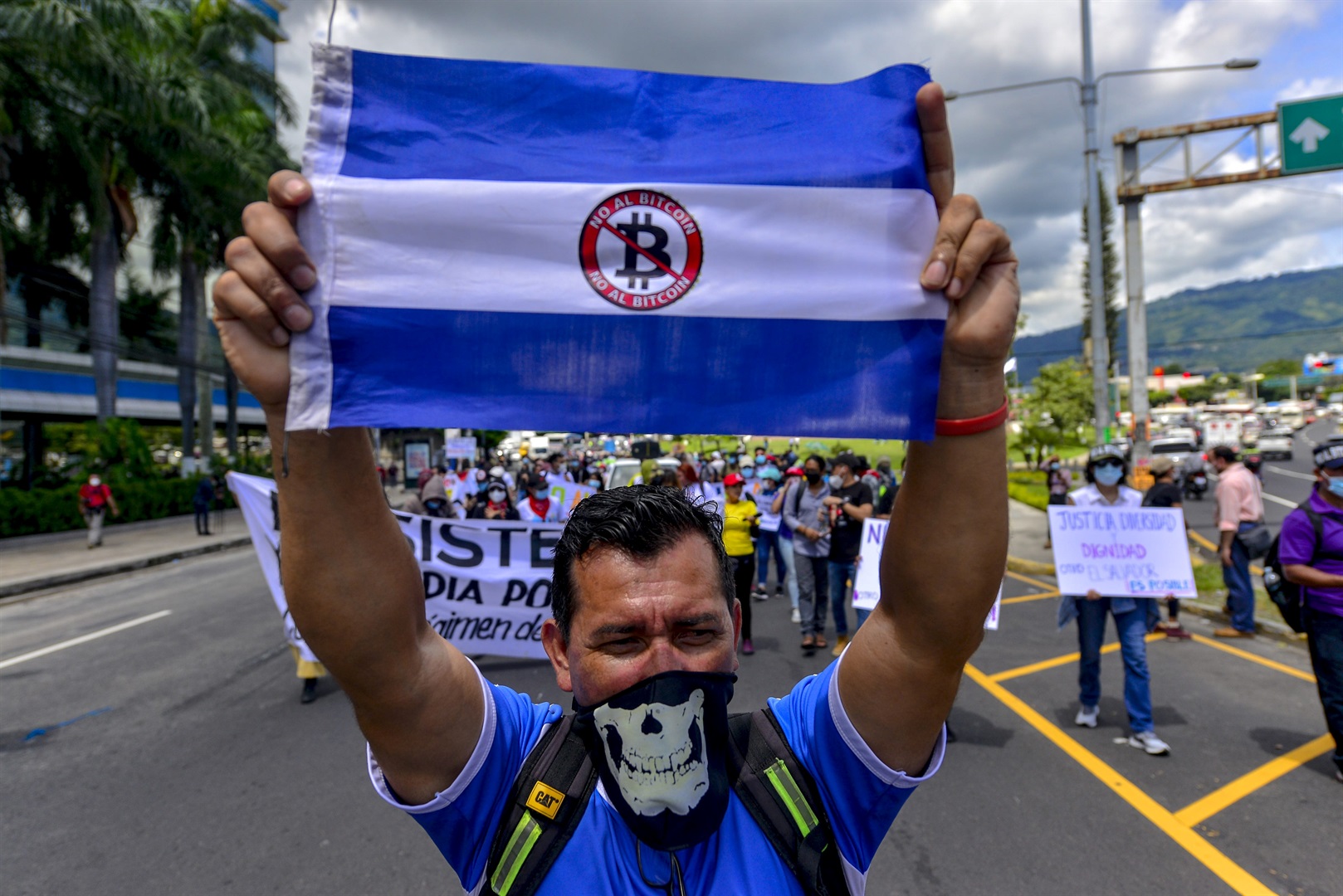 A man holds up a flag with an anti-bitcoin sticker while marching during a demonstration, in San Salvador.
Camilo Freedman for Insider

"People are rejecting the implementation of Bitcoin because it hasn't been done in a way that would benefit the working class," said Xenia Barrera, one of the protesters.

After an initial investment of $28 million (around R399 million) for 550 Bitcoin coins, the volatile Crypto market dipped on the first day, costing the government $3 million (around R42 million). On Thursday morning, the local Diario El Mundo newspaper reported that there were still technical issues with the government's Chivo wallet.

The US dollar has been El Salvador's official currency since 2001 and it remains the main currency.

When President Nayib Bukele first announced the plan for Bitcoin in June - his most important economic policy since taking office in 2019 - he did it in Miami, in English, in a video announcement at the "Bitcoin 2021" cryptocurrency conference.

Days later, the national Congress approved the plan with barely any public debate. Instead, Bukele appeared on a social media hangout where he talked up the plan to Crypto-enthusiasts.

"Every restaurant, every barber shop, every bank - everything can be paid in US dollars or Bitcoin and nobody can refuse payment," he said during the hour-long hangout, the AP reported at the time. Residents of San Salvador on the day of the Bitcoin launch.
Camilo Freedman for Insider In El Salvador, where less than half of the population has Internet access, the announcement was met with less fanfare. According to a poll performed by the Universidad Centroamericana José Simeón Cañas, about 7 of every 10 Salvadorans oppose the Bitcoin law, which requires businesses to accept Bitcoin as a payment and shields Bitcoin transactions from the capital gains tax.

People said they fear that Bitcoin's volatility will endanger their salaries, pensions, the ability to access products and services, and even the remittances themselves, which make up around 16% of the country's GDP.

On an even more basic level, in a country where around 70% of the population doesn't have a bank account, the fact that Bitcoin is not tangible - it's not money you can hold it in your hand - scares people.

"The implementation of Bitcoin places a risk on the liquidity of the country," said Tatiana Marroquin, a Salvadoran economist. "El Salvador already has had to get a $200 million (R2.8 billion) loan for Bitcoin to go into circulation. The same amount of money that could power a public hospital for a year."

Jennifer, a 17-year-old girl who sells vegetables in a street market, noted that Bitcoin remains inaccessible to people who can't pay for Internet access. Bitcoin enthusiasts gather for a party in San Salvador on the day that the Bitcoin law went into effect.
Camilo Freedman for Insider

"It's not made for people like us. It's rich people that can invest in it," she said.

Of course, for the country's wealthy minority, things appear different. It's also a boon for foreign crypto investors, who are now eligible for permanent residency in El Salvador. When the currency went live on Tuesday, there were parties at upscale clubs around the capital. One party, in the city's financial district, packed with tourists who had travelled from everywhere between Miami to Oslo to reach El Salvador to watch as the Bitcoin law went into effect.

"This is the future," said one of the partygoers, who asked to be identified only by his first name, Raul. "We're just excited to see what's going to happen, get a grasp on what's going to be reality for us."

He described President Bukele, a former businessman, as a "game changer" for the country's politics.

In the beach town of El Zonte, about 96 kilometres from the Salvadoran capital, Bitcoin has been around for a while. Here, surfers, tourists, and locals pay for their snow cones, pupusas, and even some basic services such as electricity, using Bitcoin.

Known as the "Bitcoin Beach Project," the first Bitcoin teller machine was installed here after an anonymous donor made a charitable donation in the cryptocurrency. One of the first shops to accept it was one run by "Mama Rosa," whose son Jorge Valenzuela helped spearhead the initiative.

Karla Carranza, who works a coffee shop in El Zonte, says she's saving the Bitcoin tips she gets from tourists.

"This is just something I save, and hopefully one day it will turn to more money," she said. 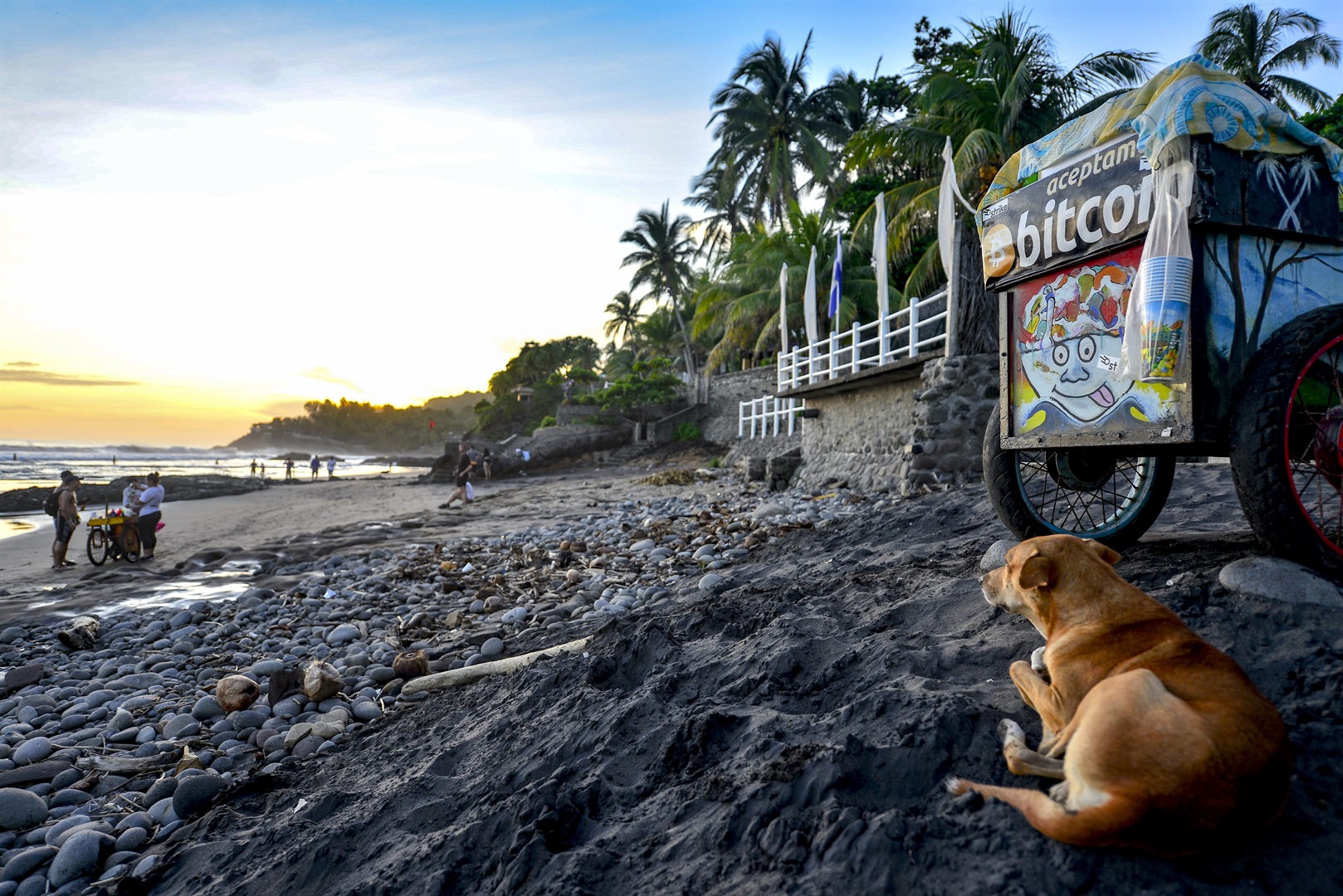 A snow cone cart that takes Bitcoin is seen on the beach, in El Zonte.
Camilo Freedman for Insider A man buys a drink in a store that accepts Bitcoin, in El Zonte.
Camilo Freedman for Insider Bitcoin is accepted at a cafe in in El Zonte. An employee, Karla Carranza, says she is saving up her Bitcoin tips.
Camilo Freedman for Insider

The ghost of a currency change past

One reason behind the widespread distrust of Bitcoin is that El Salvador has been through something like this before, and it ended badly.

In 2001, the Salvadoran Congress passed the Monetary Integration Law, which made the US dollar a legal tender, even as the Salvadoran Colon remained in circulation. But then, the Colon was pulled out of circulation, and prices for basic necessities soared.

The fact that the vote was made hastily and without public debate infuriated Salvadorans.

The Bitcoin rollout struck many as frustratingly similar, with Congress discussing the law for only three hours before the vote.

As Jose Martinez, a street vendor in downtown San Salvador, put it: "We were lied to with the dollar, they took the Colon from us, and now this is just going to suck up our dollars."

For him and others, it seems absurd that Salvodorans are not expected to trust a coin that they will never be able to see or feel.