A pet lion is reunited with its owner after it was confiscated by Cambodian authorities after the prime minister's intervention. It's not known if this picture was taken recently.
Qi Xiao/Facebook

A pet lion that was confiscated by Cambodian authorities last month in an upscale Phnom Penh district has been returned to its owner after Prime Minister Hun Sen stepped in.

The lion was confiscated late last month after authorities saw TikTok videos of it roaming in a villa in April. It was then moved to a wildlife reserve.

The lion's owner, whose name is Zhai Xinjiang, appealed to Cambodian authorities to have the lion returned.

"I am not troubled by the allegations that I used the animal to flaunt my wealth. I am just saddened by accusations that I mistreated the lion. I never removed his teeth or claws as alleged in the media and online. We loved him and he was a member of our family. We have never inflicted any harm on an animal," Zhai told the Khmer Times.

The prime minister responded in a Facebook post on Sunday that he decided to return the animal to Zhai after speaking with Agriculture Minister Veng Sakhon. He called the situation a "special case."

Speaking to Voice of America Khmer, Sakhon called the prime minister's decision "sympathetic," adding that authorities will continue to look after the wellbeing of the lion.

Zhai, whose Facebook moniker is Qi Xiao, posted an open letter on Facebook on Monday thanking the prime minister and authorities for their help and confirmed that the lion is now "home." In the post, he also included pictures of the lion with his French bulldog. 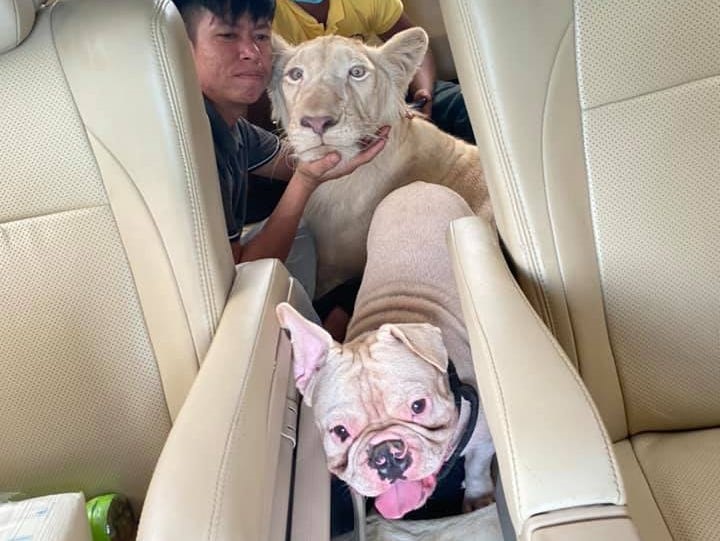 "Because of this action, we have seen the tolerance and care of the Kingdom of Cambodia towards foreigners and made me feel that based on the rule of law, any kindness and sacrifice will not disappoint," he wrote.

Wildlife Alliance, a wildlife conservation organisation that partnered with authorities to confiscate the lion, said in a statement last month that a villa was "inappropriate for a wild animal," adding that being defanged and declawed "drastically reduces a lion's quality of life."

Wildlife Alliance did not respond immediately to a request for comment.