Anti-vaccine activists protest in front of the Massachusetts State House in Boston on August 30, 2020 and a staff worker delivers a dose of Covid-19 vaccine to a patient at Fenway Park in Boston on January 29, 2021.
Scott Eise and Joseph Prezioso/AFP via Getty Images

Paul, 37, a construction worker from Glasgow, Scotland, fell out with his family on Christmas Day over their anti-vaxx opinions.

Paul, who asked Insider not to publish his surname, said: "With the Christmas lockdown exemption in Scotland, I was really excited to see my family again after what had been a very difficult year. We began discussing when we thought it would all be over and back to normal and I mentioned that I couldn't wait for the Covid-19 vaccine to become available to me.

"I began thinking about which I would choose out loud when my sister-in-law loudly proclaimed she wouldn't be having any of them. When I calmly asked her why, she angrily said that she wouldn't put something with so much mercury in her body," Paul continued.

"When I tried to explain the benefits of vaccines to her, she just got even more frustrated and basically put a damper on the whole day. I haven't spoken to her or my brother since, even though my wife and I have spent every New Year's Day with them for the last ten years."

Paul's story of anti-vaxx ideas driving a wedge between family and friends is - like the coronavirus pandemic - a global one.

Azeza, a 22-year-old law student from Cape Town, who did not want to disclose her last name, told Insider that she lost two good friends in one heated debate.

She said: "The first [argument] was around November, and we were having a chat about Covid and vaccines. That's when they started saying they won't get one and that the vaccine was a microchip.

"They provided a conspiracy theory clip they got on YouTube and also said that it was discussed at their church. I started asking more questions about how they would insert a microchip if the vaccine is liquid, and they blocked me."

As the Covid-19 vaccines are rolled out, coronavirus skeptics have taken to social media to share their anti-vaxx credo.

Having spent 2020 warning that the coronavirus was a 'plandemic' conspiracy, the standard Covid-19 test, the PCR gave 93% false-negatives and labeled those who disagreed 'sheeple,' the mass vaccination rollout has now become the focus.

Anti-vaccination opinions date back to the 18th century and the discovery of the first smallpox vaccine. In the US, religious leaders condemned them as 'the devil's work.'

The contemporary anti-vaxx movement was born in 1998 when a British study by Andrew Wakefield linked the MMR vaccine to autism.

Holly, a 42-year-old space engineer from Houston, Texas, who also asked Insider not to publish her surname, fell out with her cousin and didn't speak to her for years after saying she was thinking of not getting her two-month-old son MMR vaccinated.

Her cousin said that friends on Facebook had stated that their kids started acting weird or different after getting vaccinated, "which sounded to me like confirmation bias," said Holly.

"I said that it also wasn't fair to her son if he got sick. She didn't seem to care or think it was an issue."

Although the Wakefield study has since been discredited and his medical license has been revoked, the anti-vaxx sentiment it energised is now feeding the opposition to the mass distribution of Covid-19 shots. Andrew Wakefield stands with his wife Carmel as he addresses the media on the grounds of the General Medical Council (GMC) in London on January 28, 2010.
Shaun Curry/AFP via Getty Images

In 2019, the World Health Organisation (WHO) predicted that vaccine hesitancy would become one of the top 10 global health threats alongside Ebola, HIV, and Dengue Fever.

Common misconceptions and vaccine anxieties include:

Young people are the most vaccine-hesitant. Only 32% of 18- to 24-year-olds across seven countries said they would definitely get vaccinated.

Douglas J. Opel, Director of Clinical Ethics at Seattle Children's Hospital, told Insider: "It's an extraordinary time with respect to vaccines because this is the first time one has been made available through emergency use authorisation for the general public."

He added that the main concerns he had heard were that the development of Covid-19 vaccines had been too fast to be safe. There are also misconceptions about the seriousness of the virus.

"I do think there's some distinction to be made between reluctance to accept a Covid vaccine versus a hesitancy regarding general routine vaccinations. I think the overlap, though, is trust. Trust in the systems that develop, approve, and monitor vaccines as well as people who recommend and endorse them," Opel added.

The endpoint of the new anti-vaxx narrative is to misappropriate the memory of Hitler's Nazi genocide.

On Thursday, Piers Corbyn, the elder brother of the UK's former Labour leader, Jeremy Corbyn, was arrested for distributing leaflets comparing the Covid-19 vaccine rollout to the transporting of Jews to Auschwitz.

The leaflets have a sketch of the death camp in Poland. The mocking slogan on its gates,  "Arbeit Macht Frei" or 'work sets you free' has been replaced by "Vaccines are safe path to freedom." 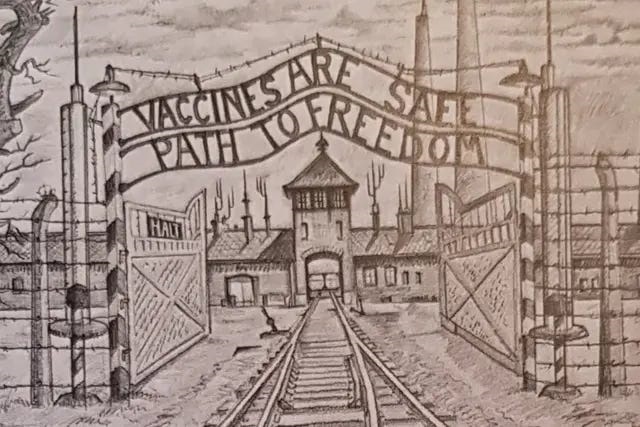 Cllr Kieron Williams, Leader of Southwark Council, south London, where Corbyn was arrested, said on suspicion of malicious communications and public nuisance said he was playing into the fears of those most at risk from Covid-19,

The gush of misinformation has increased the pressure on social media companies to act.

TikTok announced this week that the app would introduce banner warnings on "inauthentic, misleading or false content" to limit the spread of such misinformation while being reviewed for removal.

Asked if he agrees with the Royal Society and British Academy's view that spreading anti-vaxx messages should become a criminal offense in the UK, CEO at the Center for Countering Digital Hate Imran Ahmed said: "People profit from misinformation and misinformation kills people. It is absolutely criminal."

Paul A. Offit, Director of the Vaccine Education Center at the Children's Hospital of Philadelphia, said: "It's like if there were an anti-semitic website, free speech would become hate speech, so social media needs to clean up its act."

Azeza said the latest falling out with friends was personal and upsetting: "They were posting statuses and stories on WhatsApp and Instagram that contained a lot of conspiracy theories about the vaccine and Covid itself. I called them about it and that's when we started to fight.

"The rest of our friend group tried to educate them on the matter, especially about Covid being fake.

"They said they didn't care. They only cared about the conspiracy. They even said that the government paid people who died of Covid. This hurt a lot because I lost my beloved uncle on December 31 and they knew about it," Azeza said.

'We need to be more kind and empathetic'

Ethan Lindenberger, 20, a prominent vaccine advocate from Norwalk, Ohio, first hit the headlines when he decided to get vaccinated against his mother's wishes when he turned 18 in 2018.

He told Insider: "She was scared, emotional and confused. She didn't understand why I'd want to get vaccinated would ask me how I was feeling all the time as if she expected me to get sick.

"She's moved back to Texas now to be with her family but I can see on her social media profiles that now with Covid, she is falling down a rabbit hole of conspiracy theories and really buying into them."

Asked whether the topic of vaccines is something that needs to be discussed with family and friends despite the potential to harm relationships, Lindenberger said: "It needs to be an everyday conversation. Vaccines are a medical issue, not a political issue.

"We need to be more kind and empathetic, and it's important we understand why people believe something.