There are more than 17 penguin species.

Penguin Awareness Day is coming up on January 20th, and Insider has you covered with some fascinating penguin trivia.

From one-foot-tall blue penguins, the world's smallest species, to gentoo penguins, who can reach speeds of 22 miles an hour in the water, these black and white avians are as interesting as they are adorable.

Here are 23 fascinating things you never knew about penguins.

There are at least 17 species of penguins. Scientists estimate there are between 17 and 19 species of penguins. You'll find these flightless birds everywhere from Africa to Australia.

Crested penguins, such as the rockhopper and macaroni species - which are characterized by the yellow or orange tufts that extend from their heads - live in the sub-Antarctic region and Antarctic Peninsula. The temperate, less-feathery Magellanic and Humboldt species are native to South America.

But only one lives above the southern hemisphere. Since the Galápagos Islands straddle the equator, some penguins on the archipelago live further north than any other species in the world.

The smallest type of penguin is only around 10 inches tall. Growing only to a height of 10 to 12 inches, blue penguins are also known as little penguins. They're native to Australia, New Zealand, and Tasmania.

The largest, however, can grow to be over four feet (1.2 metres)! Emperor penguins are the largest species of penguin. Native to Antarctica, they're characterised by their regal stature. They can grow upwards of 50 inches tall. In 2014, scientists uncovered the 37-million-year-old remains of a "colossus" or "mega" penguin species on Seymour Island in the Antarctic Peninsula. Based on their findings, researchers estimated that the massive bird would have been 6.5 feet (1.9 metres) tall and would have weighed more than 250 pounds (133kg).

Penguins' black and white colouring is the perfect camouflage for swimming in the ocean. Known as countershading, penguins' black and white colouring protects the birds from predators such as leopard seals and sharks. As seen from below, their white undersides are hard to distinguish from the brightness of the ocean's surface.

Penguins tend to be monogamous. 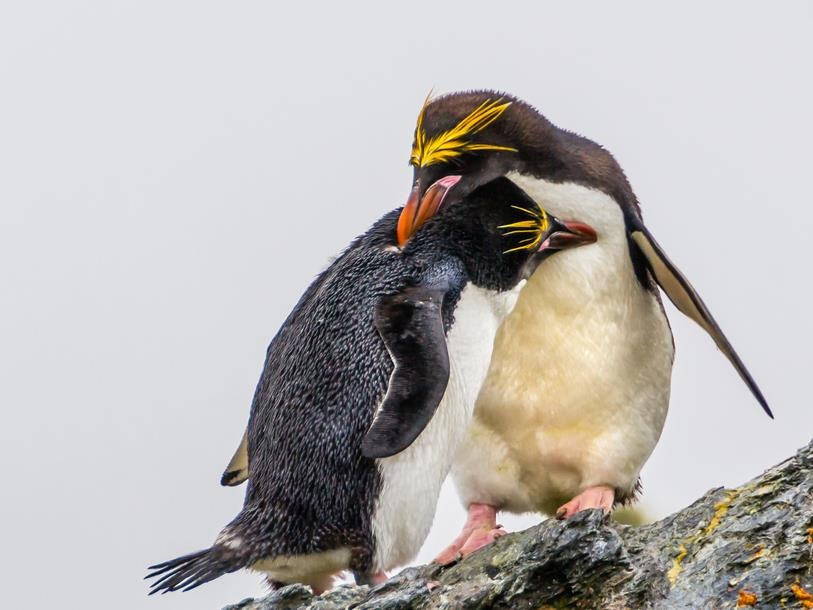 The majority of penguin species are monogamous. During mating season, one male penguin will pair off with one female penguin - but it's the female birds who compete for a mate.

There are same-sex penguin couples. Along with bears and flamingos, penguins are among the 1,500 animal species that practice same-sex coupling.

At Wingham Wildlife Park in Kent, England, two male Humboldt penguins named Jumbs and Kermit raised a chick that the baby's father had refused to incubate. In New York City, Roy and Silo, a pair of chinstrap penguins at Central Park Zoo, incubated a fertile egg and reared the chick when she hatched. While female emperor penguins go on a two-month hunting trip, the males protect and warm newly laid eggs by sheltering them in a sack of feathered skin called a brood pouch.

Incredibly, male emperors eat nothing until the females return to regurgitate food for their chicks. Then, they're free to leave their young and can head to the sea to find something to eat. Although penguin eating habits vary by species and depend on factors such as geographic region and time of year, smaller southern penguins typically feed on krill and cephalopods like squid and cuttlefish. For African penguins, fish form the core of their diet.

Some penguins can reach speeds of 35 kilometres an hour. Gentoo penguins are the fastest penguin species. In the water, they can reach swimming speeds of 35 kilometres an hour. Courtesy of Tom Hart with the Penguin Watch project

On average, penguins can reach underwater depths of 30 to 60 feet.

Emperors - the diving champions of the penguin world - can typically dive 1,700 feet below the water. But one emperor penguin dove an astonishing 6,081 feet (1,000 metres).

The world's oldest penguin is estimated to be an impressive 40 years old. At Birdland, a wildlife park in Gloucestershire, England, you'll find the world's oldest penguin. Missy, a king penguin, is estimated to be an impressive 40 years old. (In captivity, the maximum lifespan for the species is 41 years, versus 26 years in the wild.) Emperor penguins famously huddle to survive frigid Arctic winters. To ensure the birds in the middle of the group don't overheat, they move in a subtle, coordinated rotation every 30 to 60 seconds.

And like all penguin species, emperors have arteries in their legs that adjust blood flow in response to the temperature of their feet. Courtesy of Tom Hart with the Penguin Watch project

In a study published in 2013, scientists from Scotland and France illustrated that emperor penguins - the species with the highest feather density - stay warm by keeping their outer plumage at a lower temperature than the air around them. This helps them gain back heat through thermal convection (a process by which heat is transferred through a fluid medium such as air).

Penguins can't fly, but they CAN become airborne. Some can leap as high as nine feet (2 metres)! Leaping in the air allows penguins to escape the clutches of would-be predators, including leopard seals and orcas. They rely on air bubbles, which they wrap around their bodies to propel themselves above the water, much like ships and torpedoes.

Pint-sized Adélie penguins, native to Antarctica, can leap up to nine feet (2 metres) in the air. In comparison, emperor penguins can jump around a foot and a half.

On the flip side, penguins in warmer climates have clever ways of cooling down. Species that reside in warmer climates, such as Galápagos and African penguins, have several methods for coping with hot temperatures. Both species stay cool by panting and also rely on genetic adaptations to beat the heat.

With more exposed skin than any other species, Galápagos penguins have truly adapted to chill out. Additionally, to replenish sun-damaged feathers, they molt twice a year.

If you look closely, you'll notice that the African birds have a pink patch around their eyes. This patch contains a gland that helps them regulate body temperature. When it gets hotter outside, the penguins' bodies send more blood to the glands.

Penguins lose all of their old feathers at once, rather than gradually, in a process known as "catastrophic molt." While most birds molt, penguins experience something called a "catastrophic molt" when they grow new feathers. The word "catastrophic" isn't as dire as it sounds - it refers to the fact that penguins lose all of their old feathers at once rather than gradually. Less than 4,000 of the rarest kind of penguin exists today. Along with the Galápagos penguin, New Zealand's yellow-eyed penguin is one of the rarest species.

Endemic to New Zealand, you'll find yellow-eyed penguins - one of the rarest species in the world - on the Pacific nation's South Island and sub-Antarctic islands. Compared to a population of about 7,000 penguins in 2000, there are now only 3,200 to 3,600 of the birds in the wild, The Guardian reported in November 2018.

Commercial fish trawlers are likely responsible for the population decline. Scientists discovered a penguin fossil near the Waipara River in New Zealand's Canterbury region, dating back 61 million years to the Paleocene era.

The word "penguin" originally referred to a different bird. Originally, the name "penguin" referred to the great auk, a now-extinct seabird native to Newfoundland, Canada, with a passing resemblance to the black and white avians we know today. The word possibly comes from the Welsh phrase "pen gwyn," which means "white head." To measure the size of populations around Antarctica's various penguin colonies, scientists utilise high-resolution satellite imagery. Researchers from the British Antarctic Survey counted 595,000 birds in 2012 - about double the previous estimate.