People cool off in and around a large water pool at Trocadero, across the Seine from the Eiffel Tower on July 25, 2019 in Paris, France. The temperature got to 42 Celsius, or 107 fahrenheit, a high for the year and for a long time in Paris.
Owen Franken - Corbis/Getty Images

Paris recorded an all-time high temperature of 42.6 degrees Celsius on Thursday, as a blistering heat wave scorched through Europe.

Météo-France, the nation's meteorological service, said the smoldering temperature recorded around 4:30 p.m. local time was the highest ever measured for the city, breaking the previous record of 40.4 Celsius in 1947. 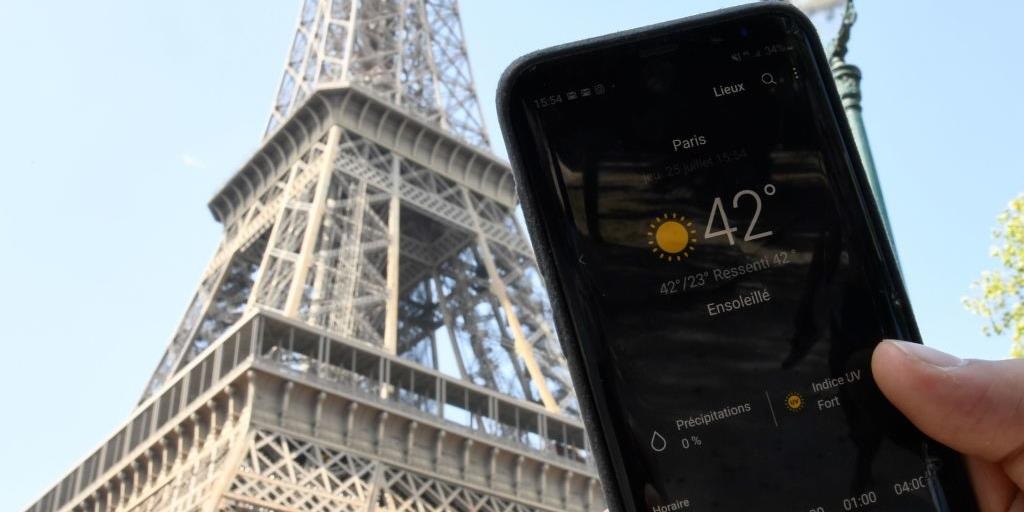 A person standing next to the Eiffel Tower holds a smartphone indicating a temperature of 42 degrees Celsius, on July 25, 2019 in Paris, as a new heatwave hits the French capital.
BERTRAND GUAY/AFP/Getty Images

France's all-time record of 46 degrees Celsius was set last month in the southern village of Gallargues-le-Montueux, according to Météo-France.

Paris residents cooled off in the fountains of the Trocadéro, across from the Eiffel Tower. Locals told the New York Times on Thursday that bathing in the fountain was a cost-effective way to beat the heat.

"Air-conditioners are expensive and consume a lot of energy," 26-year-old Sadio Konte told the Times. "Making the most of fresh and natural places is a smarter solution. And it's free."

According to AccuWeather, Belgium recorded its highest temperature ever on Thursday of 40.7 Celsius in Beitem in the West Flanders province, beating record of 39.9 Celsius  set on Wednesday.

The UK beat its July record temperature of 36.7 Celsius on Thursday, with temperatures measuring in at 38.1 Celsius, AccuWeather added.

In Lingen, Germany, a town in Lower Saxony, a new record of 41.5 degrees Celsius as measured.

Several reports released last week confirmed that June was the hottest month on record, with record-breaking heat recorded throughout the month all around the world, including in Eastern Europe, northern Russia, Asia, Africa, South America, the north Indian Ocean, and across parts of the Pacific and Atlantic oceans.

The US National Oceanic and Atmospheric Administration (NOAA) said in a report last week that nine of the 10 warmest Junes ever recorded have occurred since 2010.

Temperature spikes were particularly noticeable in parts of the Northern Hemisphere, including in Alaska, and in parts of Canada and Russia, the report said.

Satellite images posted online showed wildfires burning through huge portions of the Arctic, including Russia, Alaska, and Greenland this week. The World Meteorological Organization warned in a recent report that conditions in the Arctic are "unprecedented," and said climate change and a bout of hot, dry weather has created conditions for wildfires to thrive.

Related Links
A string of sushi restaurant fires in the US were caused by spontaneously combusting tempura flakes
These 9 countries will get hit especially hard by climate change
Last month was the hottest June ever recorded in Earth's history
Next on Business Insider
Armed Trump supporters protest outside FBI office in Phoenix following Mar-a-Lago raid: reports