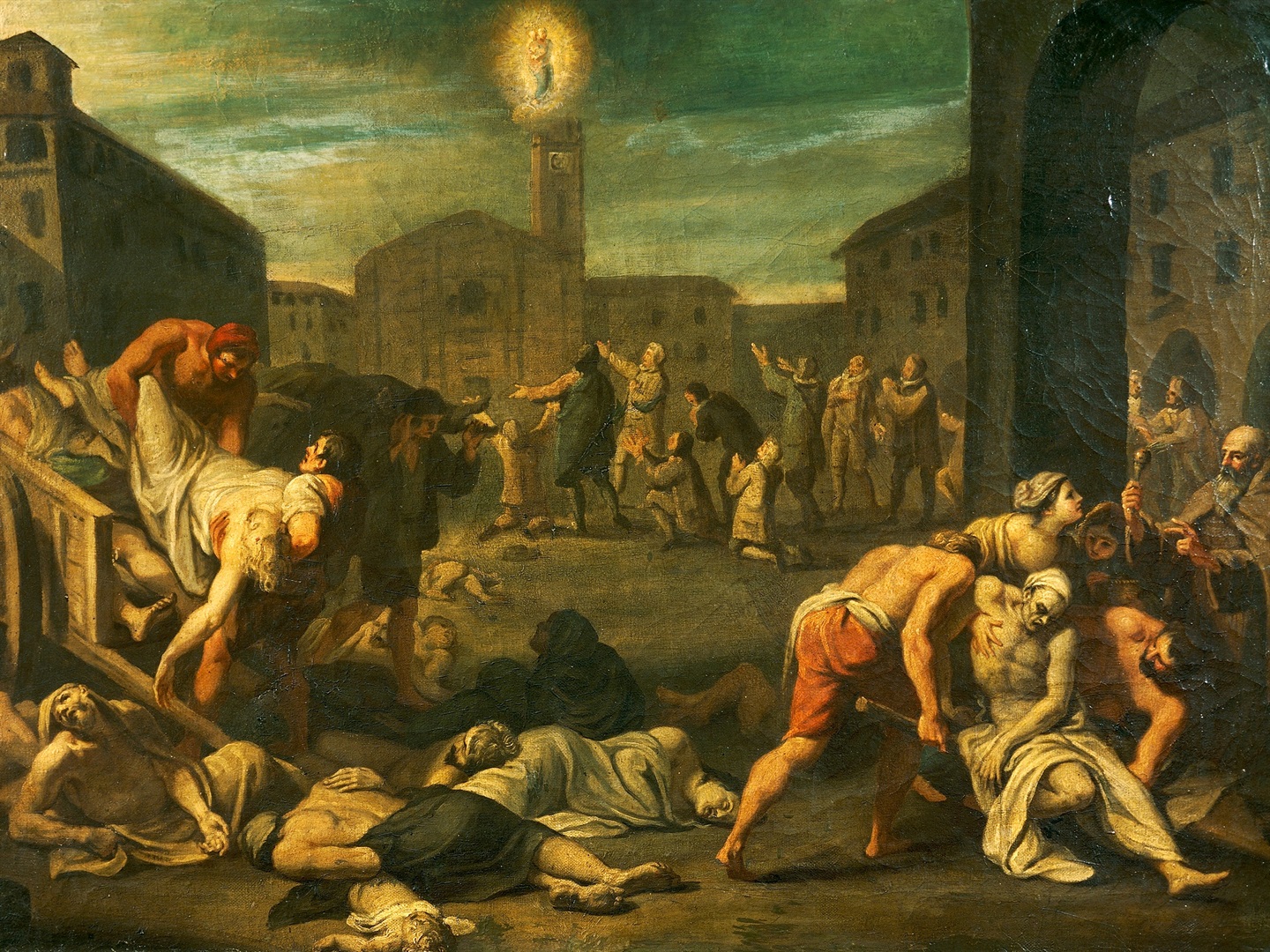 Depiction of the plague in Italy in the 17th century, seen in the Museo Storico Nazionale Dell'Arte Sanitaria.
De Agostini/Getty Images Justinian I (483 - 565 AD) ruled the Byzantine (aka Eastern Roman) Empire, and reconquered much of the Western Roman Empire before losing it again.
Bettmann/Getty Images

The reign of Justinian I, the emperor of the Byzantine Empire in the 6th century, was hampered by an outbreak of bubonic plague. Now known as the Plague of Justinian, this pandemic is thought to have killed between 30 million and 50 million people, perhaps equal to as much as half of the world's population at the time.

The Justinian plague definitely happened, but researchers are still poring over the evidence as to just how bad it was, about 1,500 years ago.

The traditional narrative of this pandemic was that trade largely ceased and the empire was weakened, allowing other civilizations to reconquer previously Byzantine lands in the Middle East, Northern Africa, and parts of Asia. As Justinian was in the process of reuniting the eastern and western halves of the Roman empire when the plague hit, it has even been blamed as the true end of that era.

Ultimately, we know how bad it could have been: half of the world died, the Roman Empire was never united again, and the Dark Ages began. Image from the Toggenburg Bible (1411) of plague victims suffering from boils.
Wikimedia Commons

Between 1347 and 1351, bubonic plague spread throughout Europe, killing approximately 25 million people. European population levels took over 200 years to return to their level from before 1347. It likely killed greater numbers in Asia, especially China, where it is thought to have originated.

Other results of the pandemic, known later as the Black Death, was the beginning of the decline of serfdom as so many people had died that the survivors' standard of living actually increased. Workers had more work opportunities, and social mobility increased, while there was also a short-lived moratorium on warfare.

Culturally, the cataclysm prompted an increase in mysticism as so much suffering challenged the religious dominance of the Roman Catholic Church. Reactions to the plague also included an upsurge in bigotry and scapegoating, with more instances of heightened prejudice and even pogroms against minorities including Jews and Roma. Europeans introduced a number of new diseases when they first arrived in the continents of the Americas in 1492. One of these was smallpox, a contagious disease that kills around 30% of those infected.

During this period, smallpox claimed the lives of approximately 20 million people, close to 90% of the population, in the Americas. The pandemic helped Europeans colonise and develop the newly vacated areas, forever altering the histories of the Americas, their European conquerors, and the global economy.

The exploitation of the mineral wealth of the "New World" in the form of silver and gold from Latin America, for example, led to massive inflation within the farflung Spanish Empire. The great economic thinker John Maynard Keynes wrote in 1930 that this "price revolution" was a crucial turning point in the formation of modern capitalism.

The first cholera pandemic began in Jessore, India, and spread through most of the region and then to neighbouring areas. It was the first of 7 major cholera pandemics that have killed millions of people. A British physician named John Snow knew some things about how to prevent it from spreading, and in 1854 stemmed the outbreak by isolating its source to a particular water pump in London's Soho neighbourhood.

The World Health Organisation has called cholera "the forgotten pandemic" and said that its seventh outbreak, which began in 1961, continues to this day. Cholera reportedly infects 1.3 million to 4 million people every year, with annual fatalities ranging from 21,000 to 143,000.

As cholera is caused by ingesting food or water contaminated with a certain bacteria, it overwhelmingly harms countries hampered by extreme wealth inequality and lack of social development. Cholera continues to change the world by hurting the parts of it least able to defend themselves, while richer countries barely worry about it. The Oakland Municipal Auditorium was used as a temporary hospital, featuring volunteer nurses from the American Red Cross, during the influenza pandemic of 1918, in Oakland, California.
Underwood Archives/Getty Images

The Spanish Flu, also known as the 1918 influenza pandemic, was an outbreak of a H1N1 virus that infected around 500 million people, or a third of the world's population, in the early 21st century. The pandemic was responsible for killing over 50 million people globally.

At the time of the outbreak, World War I was coming to an end and public health authorities had no or few official protocols in place for dealing with viral pandemics, which contributed to its large impact.

In the years to come, research into understanding how the pandemic happened and how it could have been prevented led to improvements in public health and helped lessen the impact of similar outbreaks of flu-like viruses afterward.

Fifty years after the Spanish Flu, another influenza virus, H3N2, spread around the world. Estimates put the number of global fatalities at around one million people, about 100,000 of which were in the US.

The 1968 pandemic was the third outbreak of influenza to occur in the 20th century, the other two being the Spanish Flu in 1918 and the Asian flu pandemic of 1957. It is believed that the virus responsible for the Asian flu evolved and reemerged 10 years later into this so-called "Hong Kong flu," resulting in the H3N2 pandemic. The 21st century, though, has continued to see influenza outbreaks.

While not as deadly as the 1918 influenza outbreak, H3N2 was exceptionally contagious, with 500,000 people becoming infected within 2 weeks of the first reported case, in Hong Kong. The pandemic helped the global health community understand the vital role of vaccinations in preventing future outbreaks.

The first known cases of HIV/AIDS were reported in 1981 but the disease continues to infect and kill people today. Since 1981, 75 million people have had the HIV virus and approximately 32 million have died as a result. As a sexually transmitted disease for which there is no cure, HIV/AIDS is a persistent epidemic that continues to impact millions of people every year. Despite the lack of a cure for AIDS, antiretroviral therapy medications can control HIV and slow its progress dramatically, allowing someone infected to live a long life.

Basketball superstar Magic Johnson made history when he retired from the NBA in 1991, becoming the most prominent celebrity to go public with an HIV diagnosis at that time. Johnson remains a prominent businessman, and was part of a group that acquired the Los Angeles Dodgers baseball team in 2012.

The negative influence of HIV/AIDS on the global economy is still being studied, particularly in Africa, the continent which has the largest percentage of HIV/AIDS cases. In the 1980s and '90s, the global LGBTQ community became vocal and visible in unprecedented ways because of the disproportionate impact of HIV/AIDS on its members. One of the first mainstream films to address HIV/AIDS and homophobia was the Academy Award-winning "Philadelphia," released in 1993.

SARS, or severe acute respiratory syndrome, is an illness caused by one of the 7 coronaviruses that can infect humans. In 2003, an outbreak that originated in the Guangdong province of China became a global pandemic as it rapidly spread to a total of 26 countries, infecting just over 8,000 people and killing 774 of them.

The consequences of the 2003 SARS pandemic were largely limited due to an intense public health response by global authorities, including quarantining affected areas and isolating infected individuals. Scientists studying the new 2019 coronavirus have found that its genetic makeup is 86.9% identical to the SARS virus, and officials are now comparing the two to see if governments can successfully replicate any of the containment procedures from 2003.

The SARS outbreak increased awareness about preventing viral disease transmission, particularly in Hong Kong, where public surfaces have been regularly sanitised since and facemasks have become a common sight. A map shows the path of H1N1, or "swine flu," as it spread across the US in the fall of 2009.
PLOS Computational Biology

A new form of the influenza virus emerged in 2009, infecting approximately 60.8 million people in the US, with global deaths in the range of 151,700 to 575,400. Called the "swine flu" because it appeared to cross over from pigs to humans in transmission, H1N1 differed from typical influenza outbreaks in that 80% of the virus-related deaths occured in people younger than 65. Typically, 70% to 90% of deaths from influenza outbreaks occur in those older than 65.

H1N1 demonstrated just how quickly a viral pandemic can spread in the 21st century, indicating that additional preparations would be needed for the global community to respond faster in the future. A major legacy of the swine flu may have been how it exposed the persistent vulnerability of many countries with advanced healthcare systems to a fast-moving, flu-like outbreak.

The Ebola virus, named for a river close to the initial outbreak, was limited in its range compared to most modern pandemics but incredibly deadly. It began in a small village in Guinea in 2014 and spread to a handful of neighboring countries in West Africa. The virus killed 11,325 of the 28,600 infected people, with most cases occurring in Guinea, Liberia, and Sierra Leone. Of the 8 Americans who contracted Ebola, one died, according to the CDC.

Ebola is estimated to have cost a total of $4.3 billion (R71 billion), with inbound investments dramatically dropping in the three countries above. Like "the forgotten pandemic" of cholera, Ebola most ravaged countries least equipped to defend against it. The ongoing outbreak of the novel coronavirus, which causes a disease known as COVID-19, has revealed vulnerabilities in the global community's response to outbreaks of viruses. On March 11, the WHO characterised the outbreak as a pandemic.

As of September 2020, confirmed cases worldwide have surpassed 34 million with more than one million deaths. The CDC has recommended practicing social distancing. Theme parks and museums were shut down and major events around the globe were either canceled or postponed indefinitely.

In six months, over 60 million Americans have filed for unemployment insurance. This number is higher than the claims filed during the 18-month long Great Recession. Travel, hospitality, and service sectors have been hit hard by layoffs and furloughs. On September 29, Disney announced it was cutting 28,000 theme park jobs. CNBC has previously reported that it had lost $3.5 million (R87 million) due to closures.

Other major companies with layoffs and furloughs include Ralph Lauren, Dell, United Airlines.