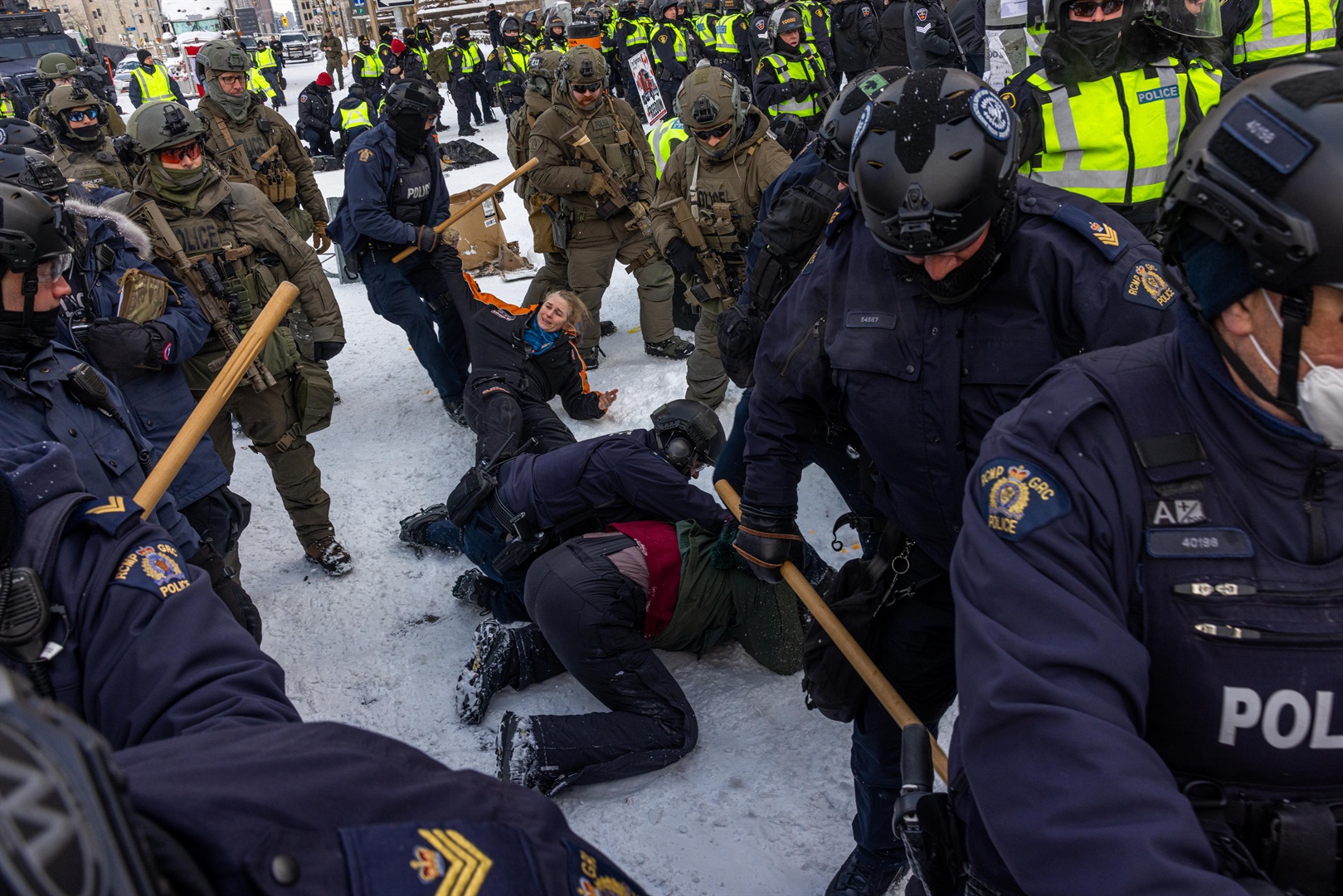 Police dispersed truckers blocking the streets of Ottawa to protest Canada's vaccine mandates over the weekend and arrested 191 people.

On Friday and Saturday, police deployed pepper spray as they moved into the downtown core areas and the streets outside parliament, where the bulk of the protestors had taken up position. Officers also towed away 76 vehicles, the Ottawa police tweeted.

Police said that the protestors had been "aggressive and assaultive," and mounted officers had to arrive to "create a safe distance" between the crowd and the police line. According to the law enforcement agency, they also arrested someone who threw a bicycle at a horse in an attempt to injure the animal.

The protesters continued their assaultive behaviour with the police line, to prevent an escalation or further injury, mounted officers were sent in to create critical space between the police line and protesters. This is done to create a safe distance. pic.twitter.com/PUIj7w1rwc

Authorities said on Saturday that no one was seriously injured or passed away during the clashes.

However, the country's Special Investigations Unit, an official civilian oversight agency that investigates when civilians are hurt or killed by law enforcement, said it is looking into an incident between a mounted officer and a 49-year-old woman, as well as another event where less-lethal firearms were discharged.

A video on Twitter shows mounted police driving back protestors before officers on foot pressed forward into the crowd, shoving the demonstrators. A man with a bicycle is seen at the front of the crowd, though it's not clear if he was related to the incident mentioned by the police.

By Saturday afternoon, the protestors had been pushed out of the streets in front of Parliament Hill, The Associated Press reported. Hundreds of police officers from across the country were deployed to clear the streets of Ottawa.
Alex Kent/Getty Images

One demonstrator, Jeremy Glass of Shelburne, Ontario, told the AP that protestors had lost control of their main camp, where they ran supplies and logistics for truckers stationed on the streets. Another organizer, Tom Marazzo, said his group had decided to "peacefully withdraw," The AP reported.

"This unlawful occupation is over," Interim Police Chief Steve Bell declared on Saturday, though he said small pockets of protestors remained across the city. "We will continue with our mission until it is complete."

In an update on Sunday, Bell said the authorities had fenced off downtown core areas and were maintaining a "very heavy police presence" there to prevent the protestors from returning. 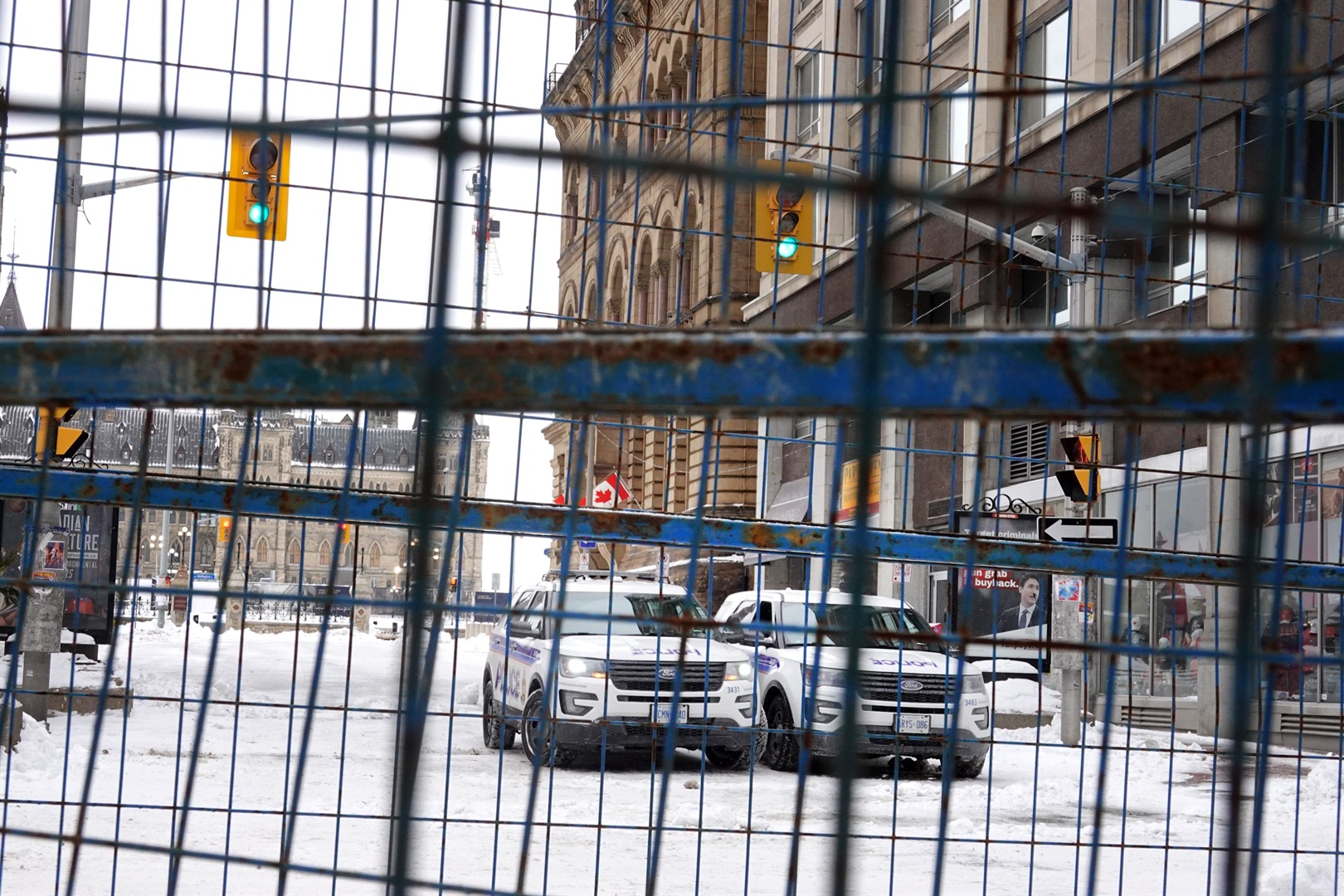 Of those arrested, 107 people face a combined total of 389 charges including obstructing police, disobeying court orders, and mischief, Bell said.

The "Freedom Convoy" protests, which began in January over vaccine restrictions, have grown to encompass demonstrations against a variety of issues related to Trudeau and public health measures.

With emergency powers in play, Trudeau's administration has focused on stifling the protestors' funding and freezing bank accounts related to the convoys while overhauling cryptocurrency and crowdfunding regulations to ban donations from flowing in.