An artist is leaving mind-bending optical illusions on buildings worldwide, and they'll make you do a double-take A mural by Peeta in Dolo, Italy.
Courtesy of Peeta

Artist Manuel Di Rita, who goes by the name Peeta, combines his love for sculpting and architecture with massive murals that look like they're bursting out of the wall.

Peeta's paintings, which can be spotted around cities in Europe, Australia, Asia, and the US, often make passersby stop and take a second look. The eye-catching murals appear to be three-dimensional due to an artistic technique he uses called anamorphisis.

Anamorphism, Peeta explained to INSIDER, gives the illusion that flat objects are three-dimensional.

Keep reading to see photos of some of Peeta's most mind-blowing paintings.

This eye-catching mural makes it tricky to identify the building's actual shape. Peeta said he started painting and studying art in the early 1990s, but he had a love for sculpting from a young age.

"Enjoying sculpture from a young age gave me insight on how to design things with clay and making sculptures with marble," he said. "My way of understanding shapes and designs that I use in my murals now largely comes from my work with sculpting."

Peeta has the ability to turn a blank wall into a brain-bending illusion. At first glance, Peeta's painted shapes and shadows on this wall of a hotel in Barcelona, Spain, blend in with the surrounding balconies and walls.

Take another look and notice how the shapes appear to move off the surface.

In this trippy painting, Peeta created shapes that look like the building's actual windows. Peeta draws inspiration for his murals from the building's architecture and surroundings.

"It's very important to interact with architecture," Peeta said. "Interacting with the geometry of the space is fundamental because every space is completely different."

This vibrant painting makes part of the building look like it's disappearing into the sky. "By playing with different shapes, shadows, contrast, and colours, I can create something that has movement," he said.

The three-dimensional effect of Peeta's murals comes from a technique called anamorphic painting, which he explained gives the illusion of depth and space where it doesn't exist. Anamorphic painting is a technique that has existed since the 15th century, according to Create, Adobe's official online magazine.

Another example of the technique, which makes paintings and two-dimensional pieces of art appear to be jumping off a canvas or surface, is illustrated on the Guinness World Records website, which features the world's largest anamorphic painting.

Here's another one of the mind-bending mural that appears to jump off the wall. Peeta's murals often include fluid, rounded shapes that make it hard to believe the wall is completely flat.

Peeta's murals can take up to two weeks to complete. Some of Peeta's projects even include lifelike textures, like water droplets. 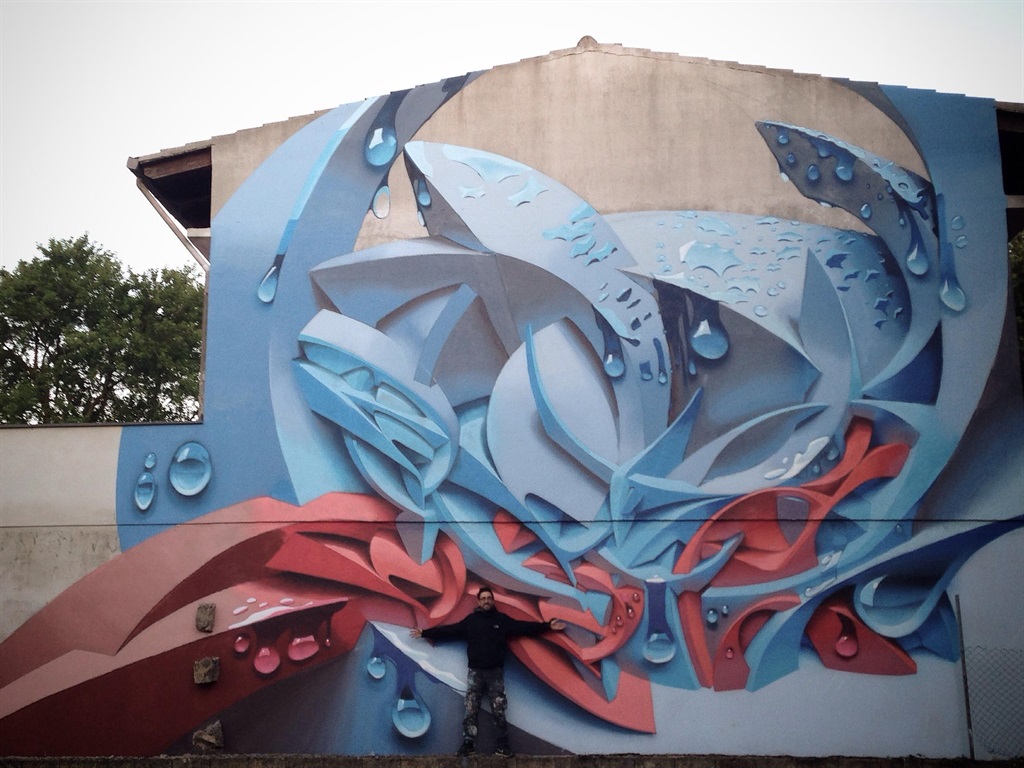 Peeta said his background in sculpting makes his one-of-a-kind murals what they are today.

"I'm not just painting or creating abstract designs," he said. "I'm also using a lot of geometry and architecture to think specifically how I can create illusions on each structure."

But creating outdoor art in public spaces can make for unpredictable challenges, too. "If it's raining or too hot outside, my murals can be delayed, which is hard," Peeta said. "That's a challenge with outdoor art, but it also makes it exciting."

Peeta said he hopes his murals inspire and catch the eyes of people who see them. Peeta said he doesn't aim for his abstract murals to convey a specific message, but he does see his work as an opportunity to bring interesting, inspiring art to cities and communities around the world.

"It's important to have art in places where people may not see it otherwise, and I get to create something that is specific to the site and the environment," Peeta said.

The artist's stunning optical illusion murals, sculptures, and canvas works appear around cities in Europe, Asia, Australia, and the US. "With public art, the work is visible whether [people] want it or not," Peeta said. "It's an exciting opportunity for me to create art in places where there's people everywhere."