79 years ago, Hitler picked a fight that may have cost him World War II German troops in the Soviet Union in 1941.
US National Archives

Just after 3:00 a.m. on June 22, 1941, Nazi Germany launched Operation Barbarossa, the largest invasion in the history of warfare. Over 3.5 million Axis troops, along with more than 3,400 tanks and 2,700 aircraft, blitzed across the 1,800-mile (2,800km) border separating the Axis powers from the Soviet Union.

Believing the Red Army to be weak because of its failures in Poland and Finland and because Stalin's purges had effectively rid it of competent leaders, Hitler reportedly told his generals, "We only have to kick in the door and the whole rotten structure will come crashing down."

The Germans divided their forces into three Army Groups. The immediate objectives were for Army Group North to drive through the Baltic and take Leningrad, while Army Group South would attack into Ukraine and take Kiev and the Donets Basin. Army Group Center, the largest of the three, would push through Minsk and Smolensk to take Moscow. The ultimate goal was to conquer everything west of the A-A Line, a boundary between the cities of Arkhangelsk, on the White Sea near Russia's present-day border with Finland, and Astrakhan, on the Volga River near the Caspian Sea.

The area west of this line held the majority of the Soviet Union's population, infrastructure, and factories, which meant controlling it was tantamount to conquering the Soviet Union. German planners believed the entire operation would only take three months.

Stalin was warned repeatedly by military and intelligence officials that a German invasion appeared imminent in 1941, but he refused to act for fear of provoking the Germans. Soviet and German planes destroyed on the ground during Operation Barbarossa, 1941.
Polish Archives

On the first day of the invasion, the Soviet air force lost over 1,200 planes, most destroyed before they could get off the ground. The damage was so severe that Maj. Gen. Ivan Kopets, commander of Soviet air forces on the Western Front, killed himself after observing the damage to his airfields.

Gen. Franz Halder, chief of staff for the German Army High Command, wrote in his diary, "I think I am not exaggerating when I say that the campaign against Russia has been won in fourteen days." Heinrich Himmler inspects a prisoner of war camp in the Soviet Union in 1941.
US National Archives

The Soviets launched desperate counterattacks to halt the German onslaught. On its way to Kiev, Army Group South ran into a massive force of over 3,000 tanks near the Ukrainian city of Brody. But after a week of fighting, the Soviet force was virtually destroyed.

Army Group North was also running into counterattacks. At the Lithuanian town of Raseiniai, one lone Soviet heavy tank managed to slow the Wehrmacht's progress for a few days before being destroyed with almost all its crew.

The Soviets did have more modern tanks like the T-34 medium and KV-1 and KV-2 heavy tanks that proved to be almost impossible to kill. But they were few, and the Luftwaffe, with almost complete air superiority, methodically destroyed the Soviet supply lines needed to keep them running. Although Soviet counterattacks were largely futile, with thousands of tanks destroyed or abandoned and even more soldiers killed, captured, or wounded, they drained Germany's reserves and strained supply lines.

One German soldier reportedly wrote, "We have no sensation of entering a defeated country, as we had in France. Instead we have resistance, permanent resistance, no matter how hopeless it is." By mid-July, a nervous Hitler was worried that Army Group Center was overextending itself and was out of sync with Army Groups North and South.

As a result, Hitler issued Directive Number 33, changing the objectives of the operation. Instead of pushing to Moscow, Army Group Center's panzer groups were diverted to Army Groups North and South to help capture Leningrad and Kiev, respectively.

The generals of Army Group Center were furious. They were less than 200 miles (321km) from Moscow and believed delaying the assault would drag the operation into the dreaded Russian winter. But Hitler was adamant, and the panzers were diverted. 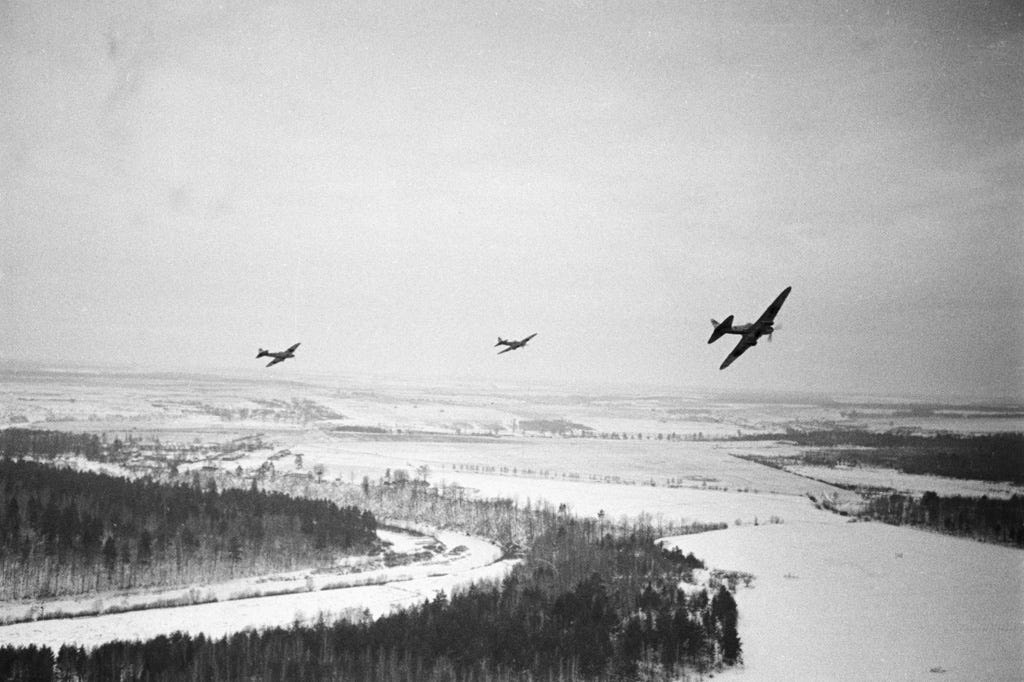 With the northern and southern flanks deemed secure, the Germans finally attacked Moscow. They had initial success, encircling Soviet forces in the Vyazma and Bryansk pockets, capturing more than 500,000 prisoners.

But by the time the Germans began their drive to Moscow in October, the seasons had caught up with them. Rains turned roads and battlefields into vast stretches of mud. Supplies were having difficulty reaching the front. German losses - especially among critical panzer groups - were mounting. With November came the winter.

'We underestimated the Russian colossus' Operation Barbarossa was now five months into what was supposed to be a three-month campaign. By their own calculations, the Germans should have reached the A-A Line and completely destroyed the Red Army.

But despite unparalleled losses, the Red Army was actually growing. At the start of the war, it was 5 million men. By the end of December, it had grown to 8 million.

This was completely unexpected. Halder even wrote, "It stands out more and more clearly that we underestimated the Russian colossus." If the Germans destroyed a dozen Russian divisions, Halder wrote, "then the Russians put another dozen in their place."

It was clear that this was a war of attrition and that taking Moscow wasn't possible. On December 2, three days before the end of offensive operations, a German reconnaissance unit reached the suburb of Khimki, just 8 miles (12km) from Moscow and less than 20 miles (32km) from the Kremlin. Operation Barbarossa had failed. Hitler's prediction of a complete Soviet collapse proved grossly incorrect. Almost 200,000 of his best soldiers were killed and more than 500,000 wounded. The Germans lost over 2,500 tanks and almost 3,000 aircraft.

Soviet casualties were appalling; well over 500,000 soldiers had been killed in action alone. Millions more were wounded or sick, and tens of thousands of planes and tanks had been destroyed.

The Germans captured 3.3 million soldiers, and by February 1942, 60% of them had died in camps - the first Soviet victims in an extermination campaign unleashed by Hitler.

The Red Army's continued counterattacks and offensives meant the Germany military never had less than 75% of its forces stationed on the Eastern Front. Hitler had led Germany into a two-front war that it did not have the resources or manpower to win.

Related Links
Google apologised after Winston Churchill's photo disappeared from searches for World War II leaders
Amid rising tensions with China, Japan just sent armored vehicles to foreign soil for the first...
Record heat is stoking wildfires in Europe — and it's setting off leftover bombs from World War II
Next on Business Insider
TAKE A LOOK | The disappointing reality of a royal event celebrating the Queen's Platinum Jubilee