How 16 of the oldest companies on Earth have been making money for centuries, from guns to beer to shipping Larger companies, like those listed on the S&P 500, tend to live about 15 years today. So there must be something special about the businesses that have persisted for 300, 500, or 1,300 years.

We looked into the data on the world's oldest companies, and a few themes became clear: People have wanted to eat, drink, learn things, or perhaps kill each other once in a while for a long time. That's why many of the businesses on this list are breweries, restaurants, or manufacturers. One of the longest-lasting, Beretta, is a gun manufacturer.

Here's a list of companies far older than most nations, including the United States. The hot spring hotel has been in operation since 705, making it the oldest running hotel in the world, according to the Guinness Book of World Records.

The inn has been run by the same family for 52 generations, according to Japan Page, the English-language expat site. The secret to its success is a sense of inter-generational pride, the report says:

... There are even some staff whose families have held the same post for generations, passing it from parent to child to grandchild. All the same, the staff are committed and courteous, earning wages for themselves and their families. They put their all into offering a spirit of service that stems from a shared desire to protect the inn. This unflagging commitment and hospitality is drawing attention from the hotel industries worldwide.

In management-speak, we call that alignment. Generations of it. This restaurant inside St. Peter's Abbey in Salzburg, Austria, may be the oldest continuously running restaurant in Europe, and perhaps the world.

Its reputation precedes it. The classy dining spot was written about by Alcuin, a follower of the world-conquering emperor Charlemagne back in 803. According to Atlas Obscura, "the restaurant has also been host to countless dignitaries over its 1,200-year history, including cardinals, kings, and in more modern times Bill Clinton and Clint Eastwood." Sean's Bar is one of the oldest bars in Ireland and also in Europe. Fun fact: Excavations have revealed mugs and coins from centuries of carousing.

... Sean's Bar is located in the very heart of Ireland, on the banks of the beautiful River Shannon at its intersection with the Esker Riada - the ancient route carved by glaciers that allowed travelers safe passage across the bog for thousands of years. You can find us just next to Athlone Castle, a 12th century Norman Castle whose residents may have frequented the pub! Beer has been made at the Weihenstephan Abbey in Bavaria for nearly a thousand years, making it the oldest brewery in the world. Its secret is obvious: The brewery makes incredibly delicious beer - the original brew has an absurd 98% rating on BeerAdvocate, the site for beer nerds. Some of the finest cognac in the world - and one of the oldest distilleries still around - is found in the southwest of France, where the Frapin family has been using the same vineyards since it opened.

The result is the highest quality spirit.

"Unlike many of its fellow producers, Frapin does not turn to outside growers for grapes and is able to apply the most exacting standards of quality control at every level of production, starting on the vines," according to Palm Bay International Spirits. "Frapin cognacs are, as a result, the epitome of excellence." If you've needed anything moved in the past 500 years in Aberdeen, Scotland, you could have reached out to the Shore Porters Society. They've hauled people's junk around the world since the time Columbus was making trips to America.

Guardian columnist Paul May professed his love for the Shore Porters in 2004:

The company was about 100 years too late to make it into Geoffrey Chaucer's Canterbury Tales, but The Shore Porter's Tale has a ring to it ...

What I love most about the Shore Porters Society is that they haven't made any attempt to update their brand since they dropped Middle Scots. They're not suddenly going to call themselves "Porta" or lose the simple block lettering. They're just going to keep on trucking for the next 500-odd years.

So if you ever go off to find the New World, talk to the Shore Porters. If you've shot a gun in the past half-millennium or so, there's a chance it came from the barrel of a Beretta. The arms company got its start when the Arsenal of Venice needed 185 barrels for the arquebus, a gentlemanly ol' hand cannon.

A few factors have been in the world's oldest gun manufacturer's favor: Its hometown is nestled among iron-rich mountains, and the company has been family-run all 400+ years. The CUP is the world's oldest publishing house, working out of the ridiculously prestigious university that bears its name. None other than Henry the VIII gave the press permission to print "all manner of books."

A few of the Press's greatest hits:

Producing widely read and cited books seems to be a sound strategy. 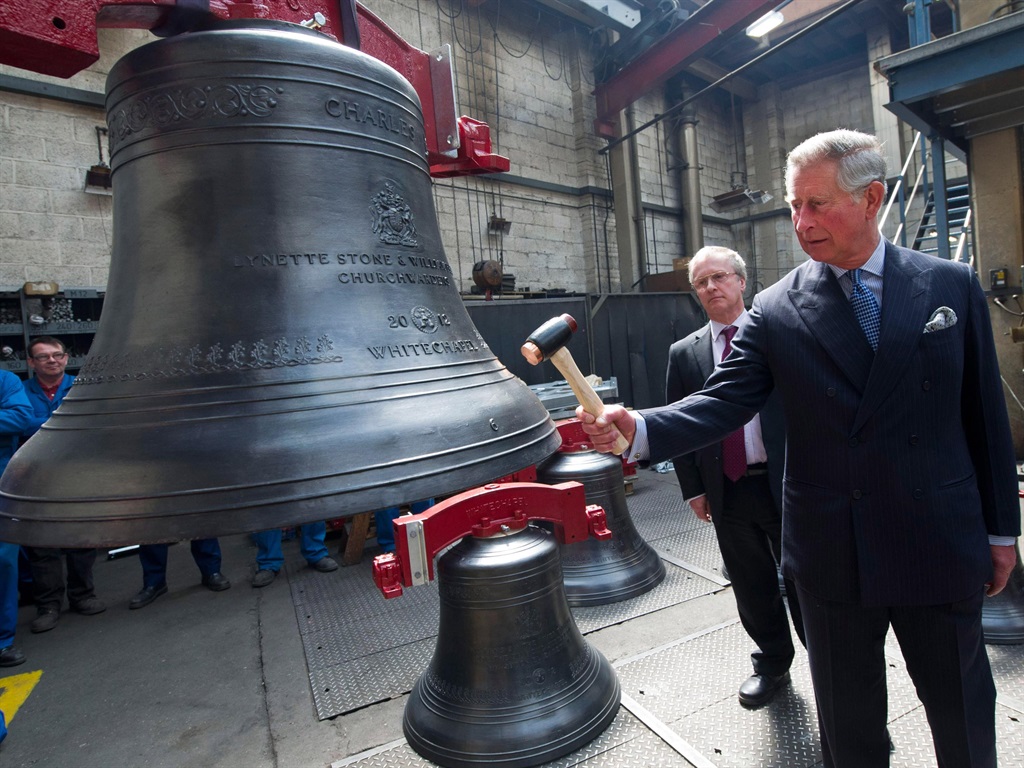 The Whitechapel Bell Foundry has been making the world's finest bells for a while now.

"Whitechapel Bell Foundry's long history spans the reigns of 27 English monarchs," the company says, "and among the royal visitors to the foundry were King George V and Queen Mary who came to witness the casting of two bells for Westminster Abbey."

Of course, the city of Philadelphia may have a few complaints about durability, as the Foundry made the Liberty Bell, which famously cracked when rang. Bushmills lays claim to being the oldest whiskey distillery on the planet. King James I - he with the Bible that bears his name - gave a certain Sir Thomas Philip the ability to distill whiskey in the April 20, 1608, according to the company.

The company has remained relevant all the while, with James Joyce giving a nod to Bushmills in his epic "Ulysses":

He never forgot himself when I was there sending me out of the room on some blind excuse paying his compliments to Bushmills whisky talking of course but hed do the same to the next woman that came along I suppose he died of galloping drink ages ago. One of America's oldest companies started in the Ottoman Empire: Zildjian, the world's leader in cymbals, was founded by Avedis Zildjian in Istanbul before his family brought the percussionist company to the States.

And it's got star power. Some of the best drummers in history have crashed Zildjian cymbals, including Ringo Star of the Beatles, Neil Pert of Rush, and Charlie Watts of the Rolling Stones.

Plus, the company has become a part of American identity: The US government granted the manufacturer permission to buy copper during the resource-starved period of World War II. Holding about 25% of the U.S. sake market, Gekkeikan is one of the most famous sake producers on earth.

The 370-year-old secret is the neighborhood of Kyoto that Gekkeikan lives in, called Fushimi. The Kyoto Project explains:

Fushimi is an ideal place for sake brewing because of its natural environment. Appropriate temperatures and good-quality water are required to brew sake. In Fushimi, both of these important factors exist.

The city of Kyoto is set in a basin, surrounded by mountains on the north, east, and west. These mountains keep Kyoto very chilly in wintertime. A cool temperature of around 5? is important to mature sake in a brewery. So cold winter temperatures created by Kyoto's natural basin is why sake brewing became so deeply rooted here.

To learn (and taste) firsthand, visit the Gekkeikan Sake Museum the next time you're in Kyoto. America's oldest family-owned business is the Shirley Plantation on the James River in Virginia. According to the Plantation's self-described history, it has "survived Indian uprisings, Bacon's Rebellion, the American Revolution, the American Civil War, and the Great Depression."

The family moved here only six years after the first permanent English settlement at Jamestown, and the 11 generations that have operated the plantation. Records indicate that the plantation had indentured servants, and later enslaved people, from 1616 until 1865, when 13th Amendment abolished slavery. The fanciest pottery on the planet comes from a single earthenware factory in the fairy-tale town of Delft, Holland. The style is so intertwined with the city that you call it Delftware, and the only company with a seal approval from the Dutch Royal Family is Royal Delft.

The elegant blue-and-white vases, pots, and bowls are a part of Dutch identity.

CEO Henk Schouten told CNN that commitment is at the core of the company's long-running success.

"We just want to produce high-level products," Schouten said, "because there are many other factories who produce the mass products ... that kind of product you can buy it very cheap in all kinds of shops. When you see a product here hand-painted then I think three quarters of the price is craftsmanship and only a quarter of the price is the cost price of all kinds of material." Imagining Britain without Twinings Tea is like imaging America without Coca-Cola: absent of its innermost consumer experience.

Founder Thomas Twining made bank on his intermingling with British cultural identity. According to reports, his Gunpowder Green Tea was selling for the equivalent of $260 per 100 grams back in the 18th century.

Twinings has longevity in more than one way: The company has been located at the same London address since it opened in 1706, and it has the oldest corporate logo still in use.

"Twinings' logo is a simple, classy, and timeless serif font," writes design blogger Tina Mailhot-Roberge. "Although it is not particularly dynamic, it matches its industry, product, and communicates its historical background with success." English bookseller Samuel Baker changed the world when he held an auction of books in 1744. That was the beginning of Sotheby's, a name now synonymous with high-brow spending.

A key to Sotheby's success is its ability to stay ahead of the trends in where the wealthy wanted to spend: coins, high-brow art, and real estate, among a few.