It's finally in the water.

For five years now, The Ocean Cleanup, an organisation founded by 24-year-old Dutch innovator Boyan Slat, has been trying to create a system that can clean plastic out of the world's oceans.

There's a mind-boggling amount of plastic in the oceans, and that amount grows every day. At least 8 million metric tons of plastic pours into the sea every year — a number that's considered a low estimate, since it doesn't include commonly found debris like fishing nets.  As this trash breaks down into tinier and tinier bits, much of it is eventually carried into one of five massive ocean regions, where plastic can be so concentrated that areas have garnered names like the Great Pacific Garbage Patch.

On Saturday, Slat's organisation began the journey out to sea with their first official 2,000-foot-long (600-metres-long) plastic cleaning array, System 001. The ship the Maersk Launcher towed the device through the San Francisco Bay out under the Golden Gate Bridge, en route to a final testing site and then — if everything goes well — they'll head to the Great Pacific Garbage Patch, where the cleanup crew hopes that first system will be able to collect 50 tons of plastic in its first year.

Slat and colleagues hope The Ocean Cleanup's plastic-collecting arrays can help at least remove large debris from these swirling vortexes. They say their models show that with a full deployment of 60 arrays, they could be able to remove 50% of the garbage patch region's plastic within five years.

But so far, their technology is still unproven, and no one knows for sure whether it'll work as planned.

The Ocean Cleanup's plan is an inspiration for many, as an effort to try to confront what seems like an impossibly large and ugly problem.

But it's also received significant criticism from members of the scientific community who study plastics. Those researchers say the system may not be effective since it can't reach most ocean plastic that has started to break into tiny pieces and sink into the waters. They fear that it could have negative impacts on marine wildlife or could be broken up by harsh ocean conditions, or that it could be a distraction from stopping the overall use of plastics and the management that prevents them from getting into the ocean in the first place.

Slat says stopping plastic pollution in the first place needs to be a global priority, but that they believe cleaning up what's out there already has to be done as well. Yet he knows the world and the scientific community are watching as the system begins its first real test.

"It's still not proven technology and in the next months, it has to do what it has to do," he told Business Insider. The group has run models and simulations and they've tested systems in the water, but this is the first time a full size array will be assembled and hopefully functioning in the Pacific.

As he said on Saturday, "models are models" — helpful, but still not perfect demonstrations of reality.

The system was assembled in Alameda, California, in a shipyard in the San Francisco Bay Area. 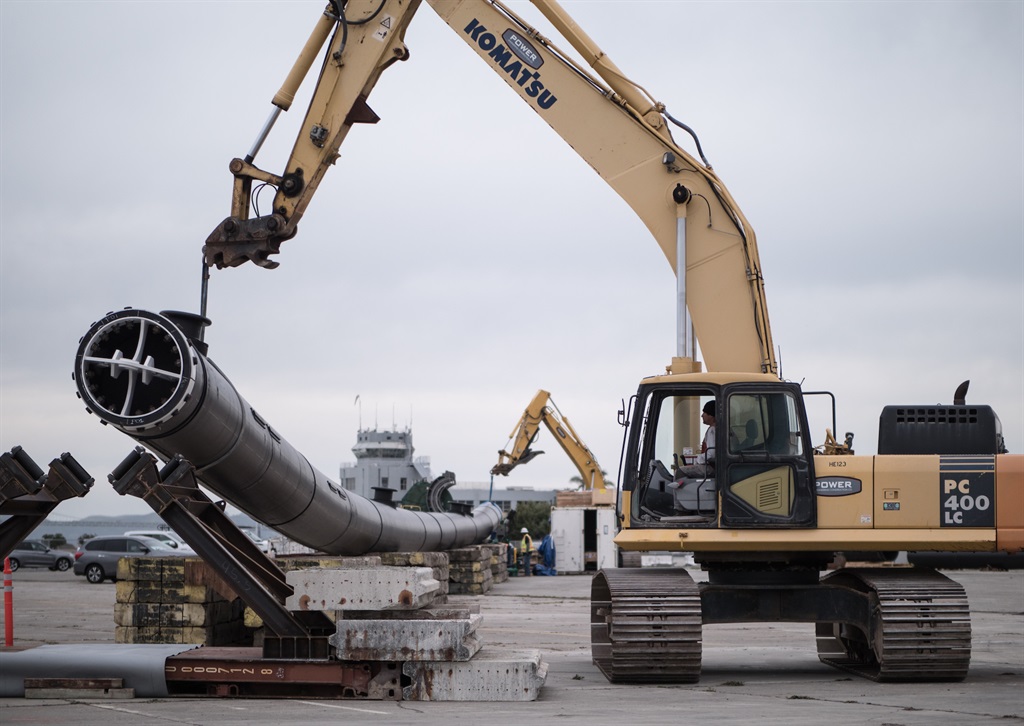 Hard-walled pipe makes up the floating component of the cleanup array. 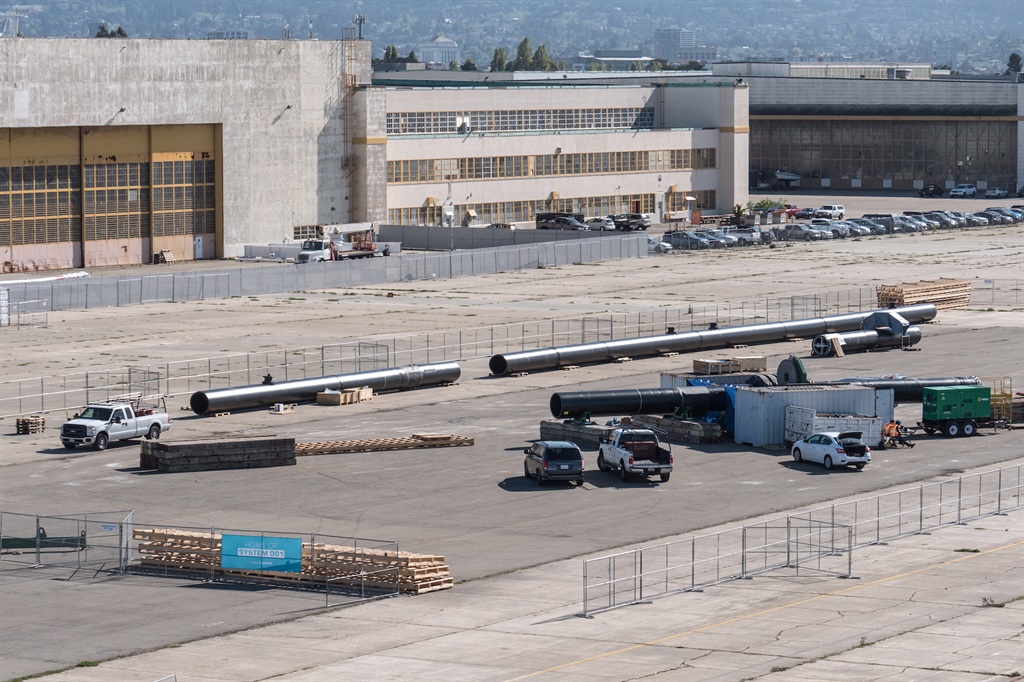 Below the floating part of the array, an impenetrable 3 metres skirt is supposed to help gather floating debris. Earlier this year, the Ocean Cleanup built a 400-foot (121 metres) test array to see how it held up while being towed out into the water. That trial unit was towed out to sea on May 18. Designing the first full-size array cost around $23 million (or about R350 million), though the team estimates that future arrays will cost under $6 million (just over R90 million) to make. The device right now is long and straight, so there's not too much drag on it in the water. But once they reach the test site, it'll first be assembled into its U-shape for approximately a two-week testing period. Slat says that there, they want to see if the system keeps its shape and structural integrity once it's fully assembled — and they also want to see how it moves in the water. If all goes well, it'll be pulled another 1,000 nautical miles out to the Great Pacific Garbage Patch. 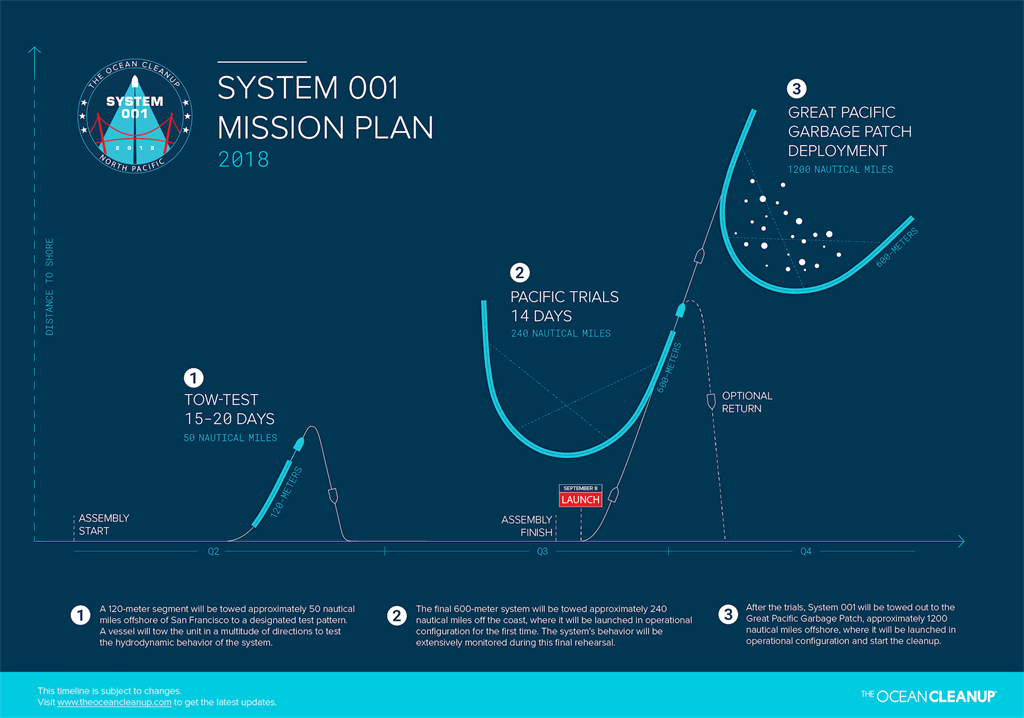 Once the array is out there, the team plans to have a ship scoop up collected plastic approximately every six weeks. But since this is a first array, the Ocean Cleanup expects they'll have to tweak and potentially redesign aspects of the cleanup arrays and the plastic collection process. Once it reaches the garbage patch region, the team wants to see how efficient it as at capturing plastic. Once winter arrives, they'll be able to see if it can stand up to massive waves and storms.

The first array might be complete, but its test is just beginning.