France launched a competition for designs to rebuild Notre-Dame. Architects want to restore the cathedral with a glass roof and a crystal spire. 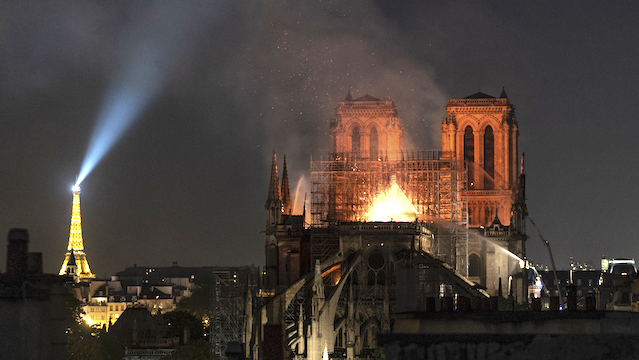 (Getty)
Renowned British architects have proposed rebuilding parts of Notre-Dame Cathedral that were destroyed by a fire this week with a glass roof and a spire made from crystal.

The 856-year-old house of worship in the heart of the French capital, Paris, caught fire on Monday night, with the blaze quickly tearing through the iconic structure. It was fully extinguished on Tuesday morning, but it caused devastating damage, with the spire of the cathedral collapsing.

As France launches a competition for designs to rebuild the parts of the structure destroyed by the fire, one British architect has proposed replacing the destroyed spire of the cathedral with one made from crystal and glass.

Ian Ritchie - who is best known for designing the Spire of Dublin, a 120-meter-tall monument in the Irish capital - told The Times newspaper that he plans to submit a competition entry including a spire that would be "a refracting, super-slender reflecting crystal to heaven."

The structure, which would be made of crystal, stainless steel and glass, Ritchie said, would "get to touch heaven's clouds in a piece of celestial gothic acupuncture."

"I think it would need to be perforated - at least 50 per cent empty space to eliminate wind loads - and could be a beautiful contemporary tracery of glass crystals and stainless steel," he added. Ray Makin, head of architecture practice Atelier MB, suggested a glass roof for the refurbished cathedral, telling The Times: "If people really need a cathedral this big then serious consideration should be given to either restoring it with a glass roof that would flood the cathedral with natural light or alternatively building a smaller church inside the ruins."

"Why not accept that this is just another step in the history of Notre Dame?" - he added.

Ritchie and Makin's views were backed by Norman Foster, the renowned designer of buildings including The Shard, the London skyscraper, and the Reichstag, Germany's parliament.

Foster told The Times that a new spire for Notre-Dame should be a "work of art about light," adding that it should also be "contemporary and very spiritual and capture the confident spirit of the time."

The appeal for new designs for the cathedral after wealthy donors from France and around the world pledged hundreds of millions of euros to fund repair efforts.

Bernard Arnault, the richest person in France and third-richest in the world, pledged to donate $226 million to help rebuild Notre-Dame Cathedral, while the Bettencourt Meyers family, which is behind L'Oreal, offered a similar amount.

French President Emmanuel Macron has suggested that the rebuilding effort could be complete in as little as five years, but experts have said that timeline appears to be far too short.