They may not be faster than a speeding bullet, or more powerful than a locomotive, or able to jump tall buildings in a single leap but these South African researchers are superheroes in the world of science – and certainly deserving of a spot in the limelight.

This was one of the driving factors that motivated mild-mannered Justin Yarrow, founder of Durban based science education non-profit CodeMakers, to 'transform' them into superhero trading cards that are spreading like wildfire across South African schools and the internet.

"When you ask kids to name a scientist, they almost always say Einstein… fundamentally the idea is that kids see scientists as old and white. Frankly it limits people's imaginations, when they don't know how cool science really is. They don't have an image of what a real scientist looks like," said Yarrow. The collection of trading cards known as SuperScientists, features 48 South African scientists from various fields of research. Much like the trading card games we know and love, they include information on age, awards, career level, and how extreme their research is. The aim of the game is to collect your strongest team and beat your opponent.

The idea for it came from the most unlikely of places, back in 2019. At the time Yarrow was teaching children to code in the township of Chesterville, in Durban, when he noticed kids would go crazy collecting Super Animals trading cards released on promotion by Pick n Pay.

"It was the sort of thing that kids would make their parents go shop at different shops, just because they wanted the cards. Then suddenly, the children would know all of the facts about these animals."

So, Yarrow tried replicating the concept from scientists in South Africa and they took off like a rocket.

"Kids kind of live in the superhero world. It's the media they consume, it's the connections to people, and characters that are so important to young people, but the way that we teach science is, at best, doing hands on experimentation and at worst, regurgitation of facts.”

For Yarrow the importance of it goes a little further than just educating kids. "The whole point with this project is that we want to reflect the demographics of South Africa...Kids love to see a picture and know their hero is a person who worked down the road or is from a community from the town that they grew up in."

One of those featured is biological anthropologist and curator at Maropeng and Sterkfontein caves Kimberleigh Tommy - aka 'Morpho' - who studies the bones of living and extinct primates to figure out why only humans walk on their hind legs. 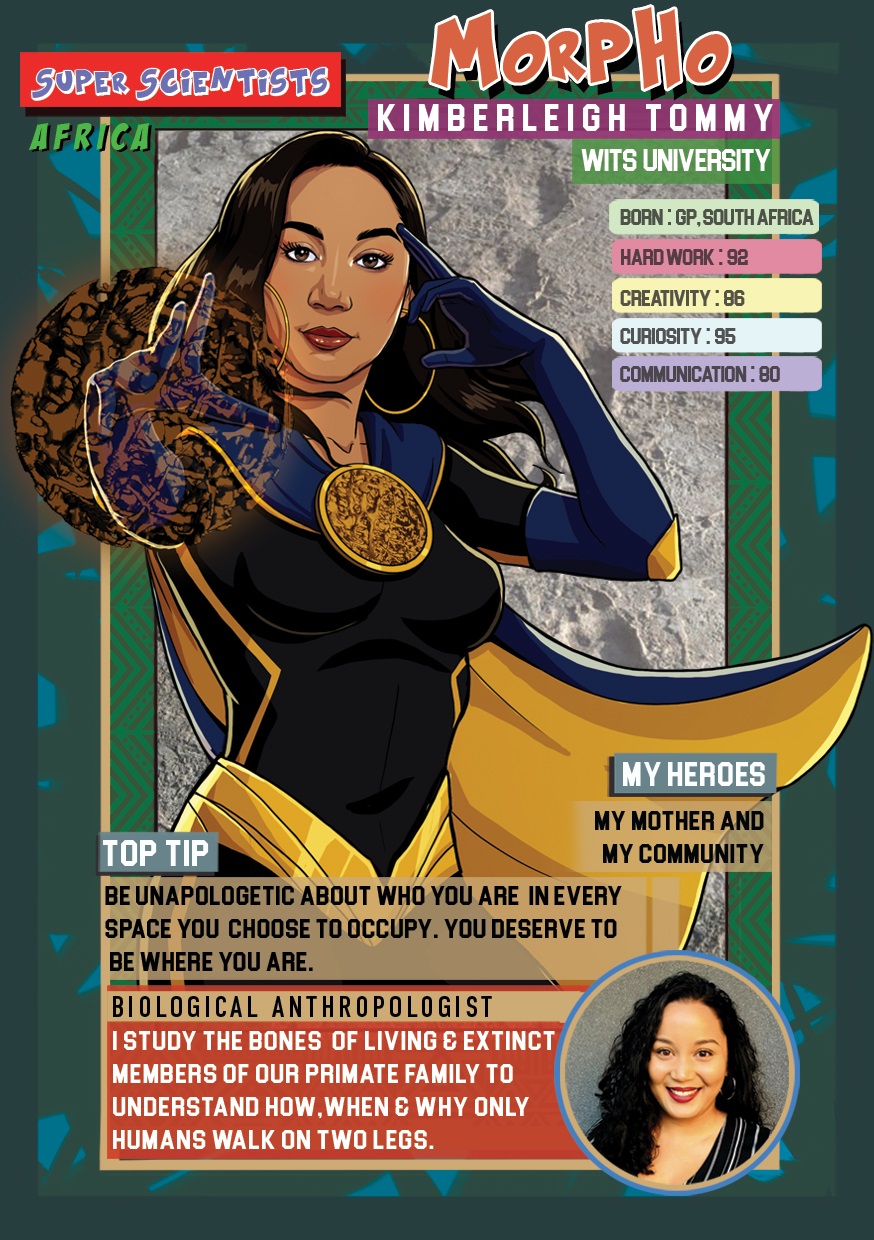 "I love [my superhero name]! Morpho is so fitting, it is fluid and truly encompasses what I love to do, which is understand why bones look the way they do and how that relates to the important functions they fulfil on a daily basis," says Tommy.

"This is such an important and necessary initiative, especially so in highlighting people of colour who have been, and continue to be, marginalised in scientific spaces. I am extremely proud and grateful to be among an amazing group of scientists who all inspire me as well."

Much like how they want to encourage kids at a young age to get into science, Tommy's own journey started at a young age. She says her inspiration was her grandparents that patiently indulged her interests in watching documentaries as well as idolising educational kids show characters like Ms Frizzel from the Magic School Bus and buying as many Nation Geographic Kids magazines they could their hands on.

"Initiatives like the trading cards are a starting point in boosting science among children and making them more aware of our local researchers and career paths. As scientists, the onus also falls on us to make science accessible, visible, fun and most importantly a safe environment for anyone who pursues it," says Tommy.

"I believe that children (and anyone really) should be able to see themselves represented in spaces that interest them. It is also important that we show children as early as possible that anything is possible, no dream is farfetched and that there is a community waiting to embrace and support them."

Key to their success has been the illustrations of the superheroes which were initially drawn by illustrator Curtis Bonhomme and, more recently, four new additions to the league of science heroes drawn by Clyde Beech, one of the lead artists at Strika Entertainment, that works on the extremely popular soccer comic book, Supa Strikas and co-developer of Kwezi Comics, South Africa's first black superhero comic.

"I've always had a huge respect for science, scientists and the legacies they leave behind through their research and discoveries. I think I've always viewed them as super-heroes… I'm hoping that our small contribution can make science just a little more fun and accessible and get more kids, and adults, to become interested in the mechanics that make our world tick," says Beech. For Beech, the real challenge was summing up a person's whole career into a single drawing.

"We wanted the characterisations of the scientists to feel like their own, so we had prompts like; their favourite colours, what they'd like their chest logo's to look like, accessories and of course capes or no capes! All I had to do was make sure their personalities shone through the art, that they were accurately represented," says Beech.

And as for the future of our new scientist superheroes collection? Yarrow wants to see them turned into a comic book series and create narratives to inspire even more superhero crazy kids to look to science for their future. The trading cards and a variety of posters and information on each superheros' field of study can be found on the SuperScientists website.