The 27-year-old became the first professional video game player to be featured on the cover of ESPN the Magazine, helped drop the ball in Times Square on New Year's Eve, and became the first streamer on Twitch to reach 10 million followers.

Those followers watch Ninja's daily "Fortnite" streams religiously; Ninja plays for about 12 hours a day from his basement studio, accepting donations, interacting with his audience, and welcoming new subscribers throughout the session. The long hours help the world's most famous professional gamer earn more than R7 million a month.

Ninja's meteoric rise to the top of the gaming world is intertwined with the massive popularity of "Fortnite: Battle Royale," his game of choice. "Fortnite" is a free game with more than 200 million players worldwide, and Ninja is regarded by many as the best player on the planet, and certainly the most visible.

During the past month he's gained an average of 12,457 followers a day on Twitch, and in the past, Ninja has streamed himself playing alongside major celebrities like rappers Drake and Travis Scott, and Pittsburgh Steelers wide receiver JuJu Smith-Schuster. The extra attention has also stirred some controversy: Ninja vowed to stop swearing during his streams after he was criticized for casually rapping a racial slur during a broadcast.

Ninja's big year showed just how much of an impact video games can have on pop culture, turning a longtime professional gamer into a celebrity in a matter of weeks. And Twitch projections show that Ninja's online popularity is only growing.

Here's everything you need to know about Ninja, the pro gamer who's bringing streaming into the mainstream:

Ninja is one of the highest-paid personalities among Twitch streamers, YouTubers, and esports players. In interviews with CNBC and CNN, Blevins confirmed he earns more than $500,000 (R7 million) a month from his more than 160,000 paid Twitch subscribers, which are separate from his 12 million followers on the same platform.

On Twitch, streamers net $2.50 for every subscription, which costs the viewer $5 a month and gets them exclusive emotes and badges while allowing them to view the stream without ads. Meanwhile, simply following a streamer is free, but doesn't come with any perks. Viewers can leave "tips" and donations for streamers while they broadcast, though, and Ninja says he once received a $40,000 donation.

Ninja's subscriptions have ballooned in the days since the interview, so it's safe to say that he makes much more now - even without accounting for the likely rise in tips from Twitch viewers. With millions of viewers pouring in daily, Ninja has an audience that is the envy of broadcasters and advertisers alike. Ninja has formed partnerships with a variety of companies including Red Bull, Uber Eats, and NZXT. While some of the deals are straightforward, like his unique discount codes on Uber Eats, others come with added perks.

In October, Red Bull helped Ninja build a state-of-the-art streaming studio in his basement. In addition to installing more than $20,000 in broadcast equipment, the studio was custom made to fit Ninja's growing personal brand.

Ninja's brand has also been boosted by appearances on popular TV shows like "The Tonight Show with Jimmy Fallon," "The Ellen DeGeneres Show," and ESPN's "E:60." He became the first professional gamer to grace the cover of "ESPN the Magazine" in October. Ninja's success is intertwined with the ongoing popularity of "Fortnite: Battle Royale," a shooter game in which a hundred online players are dropped onto an island where they mine for materials, build structures, find supplies, and kill each other until a single player is left standing, similar to the dystopian arena game described in the "The Hunger Games" books and movies.

It stands as the most-watched game on Twitch by a lot, and "Fortnite" creator Epic Games reports that the game has seen 200 million players worldwide. While packages with the full version of "Fortnite" start at $39.99, the "Battle Royale" game mode is free to play on PC, Mac, PlayStation 4, Xbox One, and mobile (both iOS and Android).

The popularity of "Fortnite" is what sparked Ninja's friendship with Drake, who is also a fan of the game. Drake initiated the unlikely pairing, saying he had watched Ninja's streams before they played together. On March 14, Drake joined Ninja for a "Fortnite" stream late at night, and the two broke Twitch's record for the most concurrent viewers of all time, partly thanks to Drake's advertising the marathon to his 36.9 million Twitter followers.

During the hours-long session, Ninja implied that it had been Drake who actually initiated the team-up.

While the two ran through the virtual island looking for weapons, Drake said he had recently been playing "Fortnite" in the recording studio during his breaks, had seen a video of Ninja playing on Instagram, and later watched more of his content on YouTube.

"I am 99.9% sure we are about to break Twitch," Ninja said shortly after, pointing out the number of their concurrent viewers had surpassed the previous non-tournament record of 388,000, held by Dr. DisRespect.

The duo was later joined by rapper Travis Scott and Pittsburgh Steelers wide receiver JuJu Smith-Schuster, who admitted during the game he is a huge Ninja fan.

That night, they maxed out at 635,000 concurrent viewers. Luckily, Twitch didn't actually crash. You can watch the recorded games on Ninja's YouTube channel.

Despite all the success, Ninja hasn't forgotten his roots. 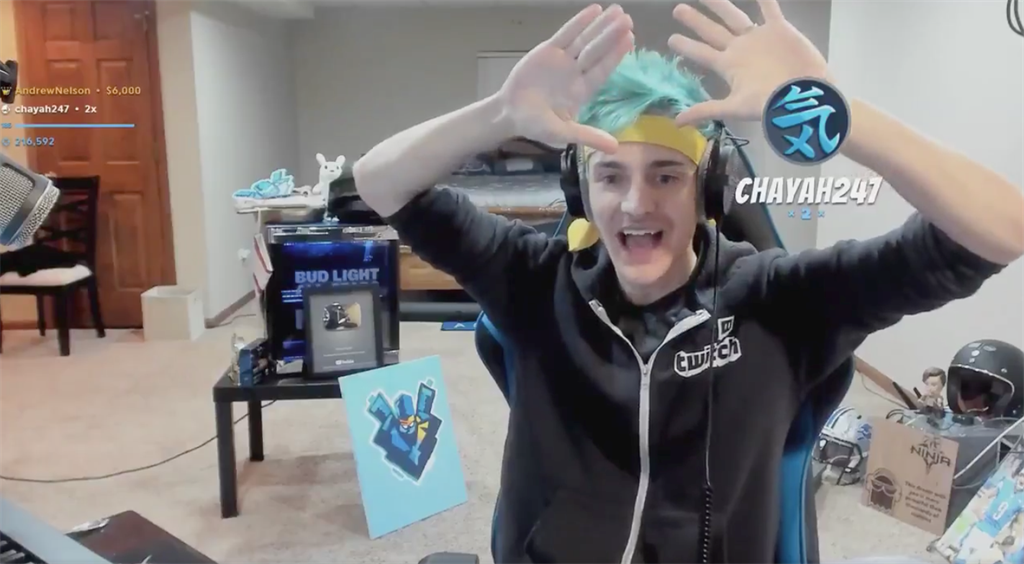 During the CNBC interview, Blevins reminded viewers that while playing video games on Twitch may seem like an easy way make millions, he doesn't recommend quitting your day job - at least not at first.

"You can't just drop everything and focus on playing video games for a living," he said, after pointing out that when he first started his gaming career, he was also working, going to college, and playing soccer. "You want to make sure you're securing your future and putting in the extra time to make this happen as well."

Perhaps the most charming part of Ninja's zero-to-hero story is his previous job at Noodles and Co., which he has nothing but kind words for, as evidenced by this Twitter thread:

You have Ninja's people, reach out to our people and we'll see what we can do.

And although he's managed to build a reputation as "one of the good ones" in the often toxic gaming community, Ninja has already faced some public scrutiny. In March, while playing "Fortnite" with Matthew "Nadeshot" Haag, Ninja started freestyle-rapping over the song "44 More" by Logic.

The actual lyrics to the song don't include the N-word, but Blevins said it anyway, to the surprise of his partner (a video of the incident has since been deleted).

Lots of Ninja's fans came to his defense on Twitter after the initial blowback, saying that unlike YouTube star Felix "PewDiePie" Kjellberg, who famously fell from grace in 2016 after calling another player the N-word (and said many other regrettable things), Blevins had no malicious intent and clearly fumbled over it in the moment, indicating that it was a sincere accident.

Blevins apologized for the blunder in a series of tweets Thursday morning, saying: "The best way I can explain it is that I promise that I understand how much pain that word causes, even if it gets used a lot in music and elsewhere. It's a word historically used to divide people, and I'm about bringing people together."

He continued, "I apologise for offending anyone and appreciate you all rocking with me."

But Ninja hasn't always been this famous. Prior to 2018, Ninja was one of the thousands of 20-somethings livestreaming video games on Twitch - where he had around 28,000 subscribers - and making gaming videos for YouTube.

He had also played "Halo" professionally, traveling all over the country to compete with various esports teams, including the Renegades, Leftovers, and Team Liquid.

And while these are huge accomplishments in both the gaming and online entertainment industries, no one could have guessed what 2018 would have in store for Ninja.

While esports and video game streaming are still only emerging as a mainstream entertainment source - and clearly experiencing growing pains - overnight celebrities like Ninja suggest that live-streaming on Twitch, a relatively new entertainment style, may soon be in competition with established but revolutionary online media epicenters like YouTube and Netflix.