You could say that Jed Rose has spent his entire career - his entire life, even - trying to get people to smoke fewer cigarettes.

Rose's father died at 47 of smoking-related heart disease. Then, as a post-doc at UCLA, Rose became fascinated with how millions of people, like his own dad, could become cripplingly addicted to a drug that "doesn't get people visibly high."

Since then, he's pioneered patches, drugs, and vape-like e-cigarette prototypes that target smokers in the hopes they'll make a switch that could net them extra years of life.

Rose's insatiable interest in smoking cessation has bolstered a 40-plus year academic and industry-sponsored career.

But with vaping-related illness reports numbering near 1,500 around the country, Rose says he worries that "anti-vaping forces" are being given the "cover" they need to undercut e-cigarettes.

He says that public health institutions like the American Lung Association and the Campaign for Tobacco-Free Kids are overblowing fears about the potential health consequences of vaping in an attempt to "squelch an industry that has the potential to save millions of lives."

Rose invented the patch, as well as one of the first e-cigs 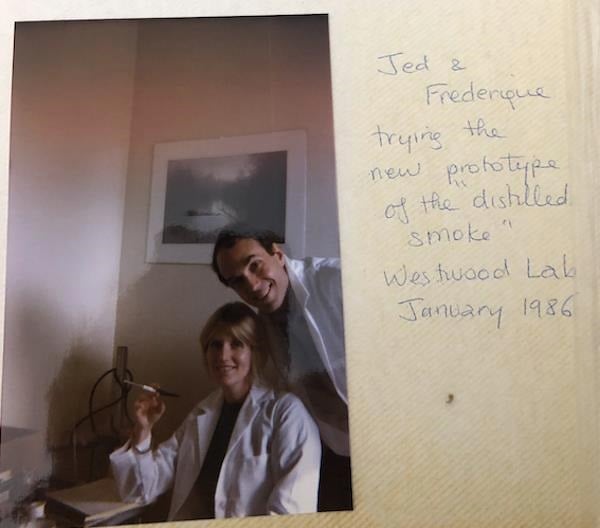 Frederique Behm-Rose worked with Rose to develop a prototype e-cigarette in the mid-1980s at UCLA. They called it "distilled smoke."

"All this stuff, the really bad stuff that comes out of burning regular cigarettes, is something we always wanted to get away from, because it's really the culprit for all those diseases and cancer-causing agents in the burning tobacco," Behm-Rose said. "Nicotine replacement works to a certain extent. But that was never quite the solution for the true hard core smokers who really need to light up a cigarette in the morning, and go on to smoke a pack a day."

She remembers growing up around a cloud of smoke at home. Her mother inhaled two packs a day, and her father was cigarette-addicted, too. Rose and Behm-Rose worked side by side in a small lab at UCLA, burning cigarettes, and turning the nicotine from the cigarette into a vape-able nicotine product that she said tasted better than a conventional cigarette.
Jed Rose and Frederique Behm

"We tasted it ourselves, you know? I mean, in those days you could do that," Behm-Rose said with a laugh. "It was actually a better version of a cigarette."

The taste of the distilled cigarette was cleaner, she said, while it still delivered a recognisable hit to the back of the throat and mouth, which a slow-release patch can't do.

"I just wish they were alive so that we could actually give them an e-cigarette to smoke instead of the combustible cigarettes," Behm-Rose said of her and her husband's deceased parents. Behm-Rose's mother died at age 78 from a stroke, which is significantly more common among smokers.

More recently, Rose pioneered a new kind of salt nicotine delivery system, continuing his quest to find something less harmful than smoking that can still give smokers the ability to see billowing smoke. About eight years ago, he sold that low-temperature salt system to Philip Morris International, and his research into cigarette-smoking alternatives has also been funded by e-cig giants Juul and Altria.

Some smokers might need more than a patch to quit

Rose is adamant that vaping is a far safer alternative to cigarette smoking. He laments the national attention created by a recent crop of vaping-related deaths, many of which involved patients inhaling THC in addition to or instead of nicotine.

"E-cigarettes and other replacements that provide smokers with the nicotine in a form they can enjoy with the habit, but without the toxic ingredients in cigarettes, have enormous potential for saving millions of lives," he said. "It's really unfortunate that there is an anti-vaping hysteria movement that's sweeping across the US that really is without any rational foundation, but it's spreading like wildfire."

Rose and Behm-Rose are both frustrated about what they believe is a lack of sustained attention to the roughly half a million Americans who are killed every year from smoking-related health issues. These include at least a dozen cancers, as well as heart disease, chronic obstructive pulmonary disease, Type 2 diabetes, and pneumonia.

Independent government studies in the United Kingdom suggest that vaping e-cigarettes, when coupled with group support sessions, one-on-one counseling, and other anti-smoking drugs, can be an effective part of a smoking cessation recipe.

But even Rose admits that e-cigs aren't a miracle cure.

"Harm reduction is giving smokers who will otherwise die of cancer, emphysema and so forth, heart disease, an alternative that is substantially less harmful," he said. "But that doesn't mean that vaping is the same as breathing clean, fresh air."

Some of his more recent work to curb smoking isn't e-cig related at all, and involves using weight loss drugs and combinations of different depression and smoking cessation treatments in the hopes of improving outcomes among smokers trying to quit. There's still very little that health experts know about the long-term effects of vaping on people. It doesn't help that the vaping industry remains largely unregulated at the federal level in the US.

At least one person who died in recent months, a 68 year-old former smoker from Nebraska who vaped around the clock, seemingly only ever vaped nicotine. That state's health department now attributes his death to vaping, not cigarettes or pneumonia, as originally suspected.

Federal investigators are now recommending that Americans refrain from vaping THC and potentially stop vaping completely, at least until a clear cause has been established for the growing number of lung injuries.

Experts don't know yet if the nicotine in e-cigarettes, or substances like propylene glycol/vegetable glycerin (PG-VG), which are ubiquitous solvents used to deliver drugs in both nicotine and marijuana vapes, might play a role, or if the culprit in the illness outbreak may be a contaminant in illicit vapes.

"I think there's an emerging consensus that the immune cells of the lung are a little bit upset by the vaping," Professor Robert Tarran, who studies vaping at the University of North Carolina Marisco Lung Institute, recently told Insider.

But Rose and Behm-Rose are adamant that banning vapes will not work to solve this emerging crop of illnesses, and may just make things worse.

"People have been vaping for many years, many years, millions of people vaping," Rose said. "All of a sudden there is this small outbreak of illness? It's almost certainly some sort of contamination that has not fully been identified."

The vaping strategy pioneered by the Rose family in the 1980s is now becoming popular, four decades later

What's now undeniable is that the once unpopular lab invention that Rose and Behm pioneered in the mid-1980s has become a blockbuster hit in the 21st century.

At least a quarter of teens in the US say they've tried vaping, while about 6% of high schoolers vape regularly. Some are addicted to the flavored nicotines, which come in varieties like creme brûlee, mango, and Capn' Crunch, in addition to menthol and tobacco.

A growing group of teens are now suing Juul, and some teens and parents are frantically scrambling to find some form of "youth nicotine treatment center" to help with e-cig addictions, the Wall Street Journal reports.

Rose, however, points out that the number of young smokers who are using e-cigarettes regularly, as opposed to the teens and tweens who are just trying out vapes, is relatively small.

"What are people going do if e-cigarettes are banned?" Behm-Rose said. "Well, they're going to go back to smoking, something that's going to kill them for sure. That would be a mistake."