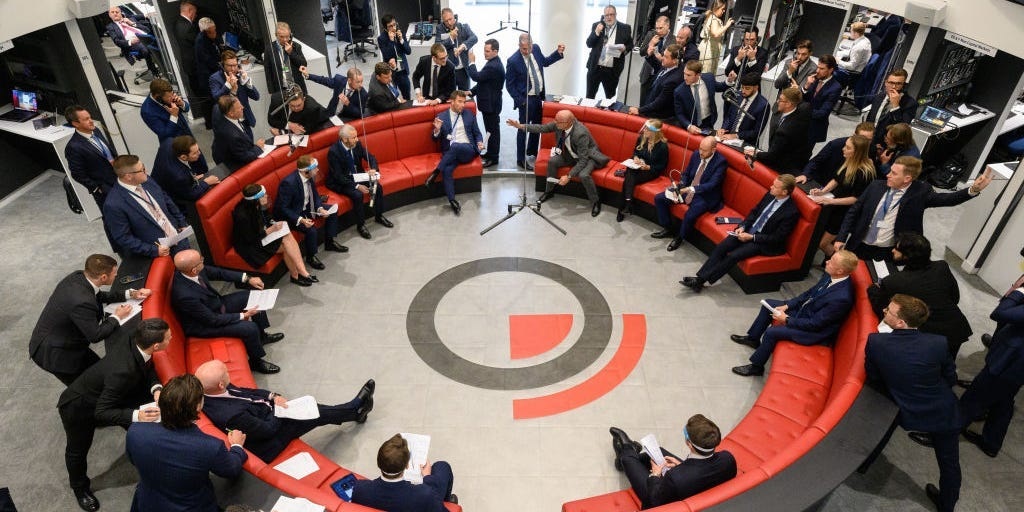 The "ring" at the London Metal Exchange, where traders buy and sell metals.
Leon Neal/Getty Images

The chaos in the nickel market resumed on Wednesday, as prices instantly fell 5% and the London Metal Exchange was forced to suspend trading due to a glitch just minutes after reopening from a rare week-long break.

Nickel prices skyrocketed above $100,000 a ton last week, having started the month at around $25,000, after Russia's invasion of Ukraine pushed up commodities prices and wrong-footed many traders, unleashing what's known as a "short squeeze."

London Metal Exchange responded by suspending trading and canceling $3.9 billion worth of trades in an extremely rare move that effectively unwound the clock to set the nickel price back below $50,000.

Trading reopened on Wednesday and the price of nickel immediately fell 5% to around $45,600, LME said, hitting the new lower limit imposed by the exchange to try to maintain orderly trading. LME's new limits allow the price to move 5% up or down.

The exchange swiftly paused buying and selling, however, saying that technical issues meant some trades had been executed below the price limit.

"The LME will continue to investigate the IT system error and will update the market in due course as to a future re-opening of the Nickel market on LMEselect," it said in a statement.

LME said only electronic trading was suspended. It said trading in the physical open-outcry "ring" in London would be operating as normal, with the new price limits of 5% each way still in operation.

The fall in the nickel price shows that the dramatic short squeeze is easing. But the new trading suspension is an embarrassing setback for the LME, which angered some traders by canceling trades last week.

Nickel is predominantly used in the creation of stainless steel, but is also increasingly used in batteries for electric cars.

It is one of a number of commodities that has surged in price since Russia unleashed war on Ukraine, alongside oil, wheat, and other metals such as palladium. However, few other commodities markets have been on quite as wild a ride.

Many producers, traders, and brokers were left worrying that they might collapse last week when the price surged above $100,000. The metal has traded between $10,000 and $20,000 for much of the past decade.

At the centre of the huge price move was a Chinese metals producer called Tsingshan, owned by tycoon Xiang Guangda.

Tsingshan and Xiang had amassed a big short position — that is, made major bets that the price of nickel would fall. When the price started climbing, brokers and banks rushed to close part of Xiang's position, buying back nickel and pushing up the price in a classic short squeeze.

The rising price meant many producers and users, who regularly take short positions to reduce risk, were left facing demands to cough up more cash to cover potential losses, known as margin calls.

"Having surged more than 50% last week pushing above $100,000, the commodity looks set to further wild swings and trading halts as the exchange desperately attempts to calm the disorderly price action and reinstate confidence in the volatile and messy market," said Victoria Scholar, head of investment at trading platform Interactive Investor.