I visited the 5.000km volcanic crater considered Africa's 'eighth wonder of the world' to see if it actually lives up to the hype Ngorongoro is called the "Eden of Africa."
Harrison Jacobs/Business Insider

The Ngorongoro Crater has many nicknames - Africa's "eighth wonder of the world" and "Africa's Eden," to name a few.

But even without these lofty nicknames, the crater is a stunning a sight. Formed 2.5 million years ago after an extinct volcano collapsed on itself, the caldera is largest of its kind in the world.

Today, the crater has become a fascinating, self-contained ecosystem full of wildlife. It is home to over 25,000 large animals, including close to 70 lions - the highest density of lions in the world - and many critically endangered black rhinos. Because the rhino is frequently targeted by poachers, the number of rhinos in the crater is kept a secret.

Visiting Ngorongoro is a highlight for most safari visitors. The inside of the crater is only about 100 square miles in area and 12 miles across, making it very easy to see all sorts of game.

While the grasslands of the Serengeti may be Tanzania's most iconic destination, the Ngorongoro Crater might be the country's most stunning place. The 160-square kilometre volcanic crater is the largest in the world and has been nicknamed Africa's "eighth wonder of the world."

To get to the crater, my guide and I drove through mountain highlands of the Ngorongoro Conservation Area, which surrounds the crater. The Conservation Area is comprised of 5,000 square kilometres of highlands, lakes, plains, and forests.

The highlands are the perfect place to spot wild giraffes, which like to eat the many species of trees that populate the area.

Before heading into the crater, however, I had to get a view from above. From the rim of the crater, I could see how the walls were covered with jungle while the center mimicked the short grasses of the Serengeti.

The walls of the crater are almost 500m high. Only the Maasai, a local ethnic group of about 1 million living in Tanzania and Kenya, migrate in and out of the crater.

There's a lot to see below. In the foreground of this photo, you can see a herd of wildebeest gathering around a water source. In the background of this photo, there's a "dust devil," a whirlwind that occurs when hot and cold air mix together. It's a common occurrence in Ngorongoro.

The crater is famous for its population of critically endangered black rhinos. 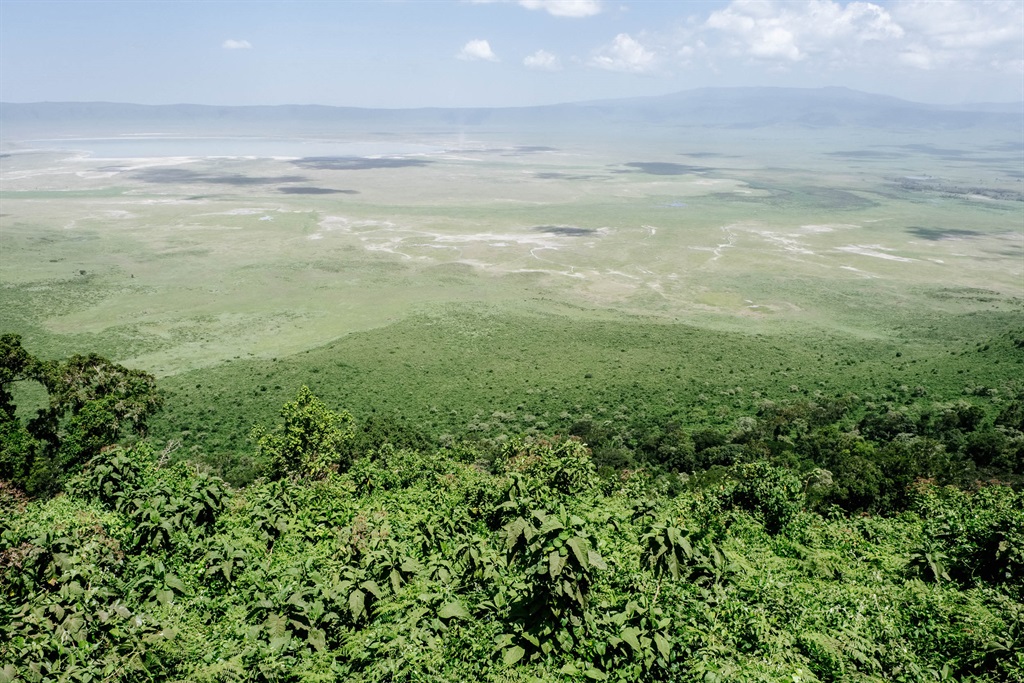 Because rhinos are frequently targeted by poachers, the number of rhinos in the crater is kept a secret.

Many park rangers have lost their lives trying to stop poachers in the crater. The crater is considered a UNESCO World Heritage site, which means there are a lot of rules in place to protect it. Each car only gets about five hours inside, there is no off-roading, and you cannot get out of your car.

Before driving into the caldera, Charles Nnko, my guide, opened up the roof. Like many companies, Tanzania Experience has modified vehicles, with an elongated cabin for more seats, larger windows, and a roof that can be raised so passengers can stand and look around.

The drive into the crater itself is exhilarating. You go through a thick jungle down into a steep, winding rocky road. There are so many variations in climate and altitude in Ngorongoro that it has produced a variety of overlapping habitats, including grasslands, forests, woodlands, and moorlands. The clouds seem to hug the top of the crater like a lid.

Most visitors to Tanzania come to see the Great Wildebeest Migration, where 1.5 million wildebeest and half a million other animals migrate along a nearly 2,000km cycle. But the animals in the crater, whether wildebeest, lion, or elephant, are not part of the migration. Because the animals in the crater never leave, many wildebeest had already given birth to their calves. Wildebeest calves can run at the same speed as an adult within two days of their birth.

Ngorongoro is home to 25,000 large animals within a 160-square km area. That makes it very easy to get very close to big animals. Zebras were always walking back and forth across the road to find a new place to graze while we were driving.

These lions were lounging just feet away from our jeep. The crater is home to close to 70 lions, the highest density of lions in the world.

Seriously, these lions were so close to the window of the jeep I could feel their breath. My guide had to yell at me to keep my hands inside the vehicle when we were next to them. They didn't seem to mind the safari jeeps around.

They were more concerned with finding dinner.

This was the first mature male lion I saw after five days on safari. Adult male lions rarely go out and hunt during the day.

One of the most common animals you can find in the crater are warthogs — Pumba, for those "Lion King" fans out there. 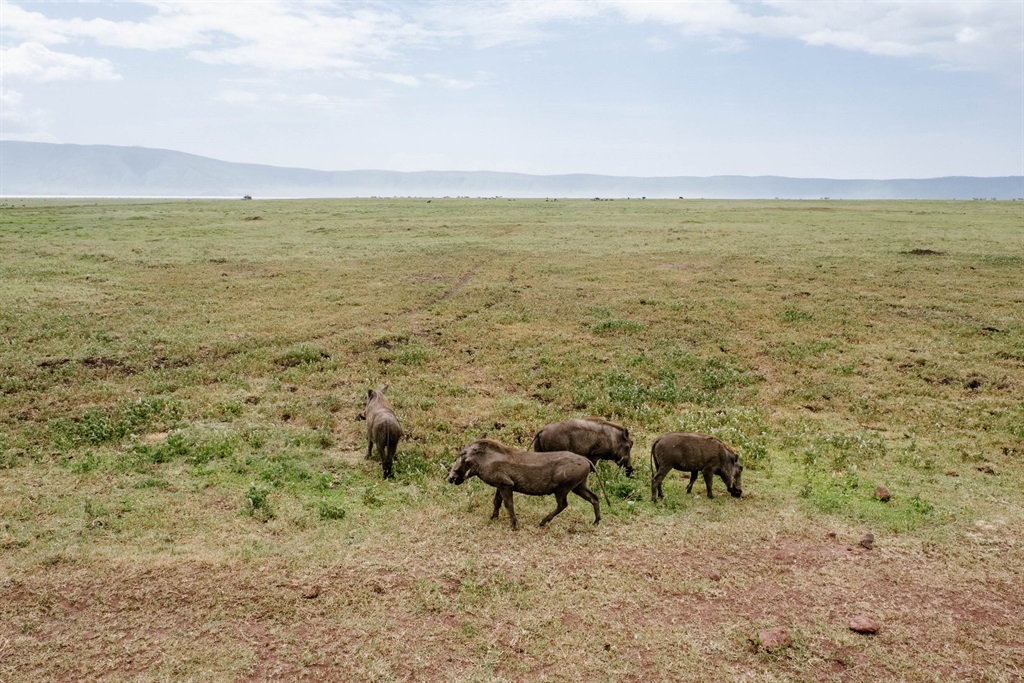 I saw this family of warthogs scurry into the distance.

The only time you can get out of your car is at a designated picnic area. This area was next to a lake populated with hippos. I was told to eat inside the jeep to avoid birds that circle the picnic area looking for unguarded sandwiches.

After lunch, I watched as a few hippos bobbed up and down in the water. Hippos can hold their breath for five minutes.

The hippo pool was a popular spot for photographers to get their wildlife photos in. I spotted a few taking turns catching the hippos rising out of the water. The crater is home to an incredible amount of biodiversity, including over 500 species of bird. In the short time we spent in the crater, I spotted a grey-crowned crane and what I think was a superb starling.

Each jeep is allowed only five hours in the crater to limit the environmental impact. That's not a lot of time to spot a black rhino. But I got very lucky. Nnko spotted two, far in the distance on the right-center of the frame, below the shadow. Most people never even see one rhino. I was able to watch them munch grass through my binoculars.

With time running out before I had to leave the crater, I spotted another pride of lions. These ones were acting very cat-like, lounging on their backs in the afternoon sun. Though you can find plenty of lions and rhinos, there are no leopards in the crater, as the habitat is not ideal for them.

The drive out of the crater was as thrilling as going down into it. As you drive out, the landscape suddenly changes to thick jungle.

We took one last view from above. The mix of emerald forested areas and the light green plains made me think of Ngorongoro's nickname, "Africa's Eden."

We drove to the park gatehouse to check out — everyone has to log when they enter and leave the park. Nnko told me to stay inside the car. Baboons hang in the trees above, waiting to harass tourists.

There were whole families of baboons hang out right next to the road. Any fear they once had of humans is long gone. Read more: I forgot to pack 2 obvious accessories when I left for a 5-day African safari, and the mistake nearly ruined the entire trip

As we left Ngorongoro and started the hours-long drive back toward Arusha, I was still struck by how incredible visiting the crater was. The crater is a rare combination of natural beauty, history, and wildlife.

By the end of my five-hour visit in the park, I was convinced that it more than lived up to the hype, and to its many nicknames.

Related Links
We toured the world-famous Blue Train – now also for business trips at R60,000 per person
The real story behind canned lion hunting in SA
Following another tragic mauling in a game reserve, tourists on safari are cautioned to avoid...
Next on Business Insider
Twitter lost three more top executives amid Elon Musk takeover drama