Cape Town’s newest cannabis club opened its doors at the end of 2021, offering members access to more than 60 products, an in-house Chinese Medicine doctor, coffee, and a remote workspace.

South Africa’s cannabis industry is growing at a rapid rate. The catalyst for this growth was a landmark Constitutional Court ruling in 2018 that decriminalised private and personal use of dagga, and so set the wheels of commercialisation in motion.

The industry is estimated to be worth around R28 billion and can create up to 25,000 jobs, according to the Department of Agriculture, Land Reform and Rural Development (DALRRD), which published a first draft of its Cannabis Master Plan in 2021.

The plan looks to unlock cannabis’ vast economic potential by turning South Africa into a major export hub, industrialising the plant to empower communities and benefit growers. But this plan is still in its infancy and requires enabling legislation – the Cannabis for Private Purposes Bill – which builds on the Constitutional Court ruling. In the meantime, exclusive cannabis clubs have been popping up around South Africa. One such club, which promotes responsible dagga use for recreational and medicinal purposes, recently opened in Sea Point.

“I was waiting for the legalisation process, and it was a very, very long wait,” Pierre Sarembock, founder of Cannibisters, told Business Insider South Africa.

“It [the 2018 Constitutional Court ruling] gave me the balls to make my dream a reality. The moment that ruling came out, that you can grow your own for your own personal consumption, I went out and bought a tent and started growing my own in a small manner.” 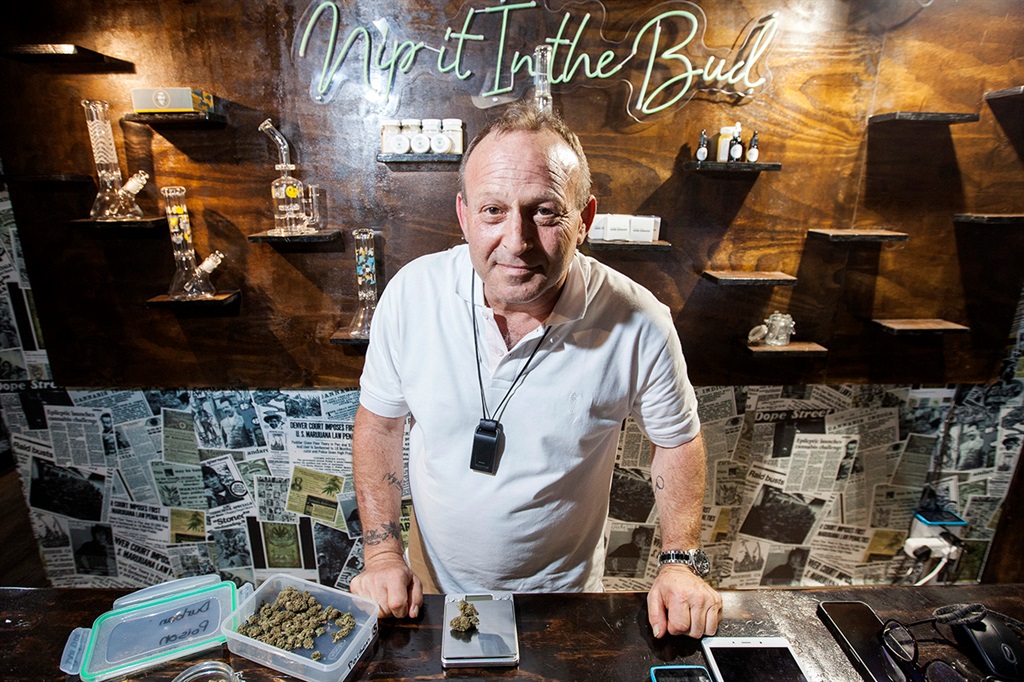 Sarembock’s introduction to the business of cannabis came almost 40 years ago, when as a 19-year-old, having recently left South Africa for New York, he began selling cannabis to finance his studies. The dream of one day owning a cannabis club came on a trip to Amsterdam a year later.

“The Bulldog [in Amsterdam] was one of the first clubs that opened and most of the older clubs have dungeons that you walk down to, with burglar bars, where you look through the burglars and see what they’ve handwritten on the chalkboard [saying] what there is, with the price, and you can’t touch it,” said Sarembock.

“My mother said ‘go to The Bulldog’ and I found it the most disgusting experience I could imagine. I felt like I was scoring dope like I used to score dope. You’re buying weed in a bar that serves alcohol, I found that concept weird [and] it was a complete turnoff.” It’s this experience of The Bulldog, and other cannabis clubs like it, that set clear parameters for Sarembock’s vision of what a responsible, professional, and clean club should be.

At Cannibisters, which Sarembock describes as a “baristas of fine cannabis”, no alcohol or cigarettes are permitted. The club is flooded with natural light, dappled through frosted windows facing Sea Point’s busy main stretch. Most of the walls are pure white, with some featuring prohibition-era news clippings about marijuana. A barista prepares coffee, which can be dagga-infused. Couches and chairs are dotted throughout. Members connect to the wi-fi and work at tables. Oils, lotions, and paraphernalia can be seen behind the dispensary counter, but no flower is on display.

“We have a Chinese doctor, who’s practiced for the past 24 years, and we dispense, with a compounding and dispensing licence, medical-grade for patients who require medicinal cannabis in a format of either flower, oil, edible or liquid,” said Sarembock. Cannibisters’ members pay R100 a month and that gets them into the club. But cannabis products aren’t sold, they’re “shared” or “exchanged”. This specific terminology allows the club to operate without contravening the current laws.

“The law says that you may not sell, but the law says you may be a member, and, with that membership, you enjoy the benefits of the club. So, you’re basically making a contribution to the other members where we are sharing. It’s never a sale,” said Sarembock. Backed by a team of lawyers, Sarembock has engaged with the South African Police Service (SAPS), department of health, and South African Health Products Regulatory Authority (SAHPRA) to try to ensure that Cannibisters doesn’t run afoul of the law.

The club, which opened its doors on 31 December 2021 but is yet to have its official opening and media day, already counts more than 200 members. And while the sale and use of dagga has remained largely taboo in South Africa, due to a century of prohibitive laws, Sarembock said that Cannibisters has received the blessing from the Sea Point community. “Our edibles are kosher and halal, that was one of my keys things,” said Sarembock.

“I’m in Sea Point. I’m Jewish. I rent from the synagogue, which gave me the blessing to open up the shop. To me, that was one of the biggest things, that I’ve been blessed by my community to open up and that this community needed a health and wellbeing centre, where people could use alternate medicine.”