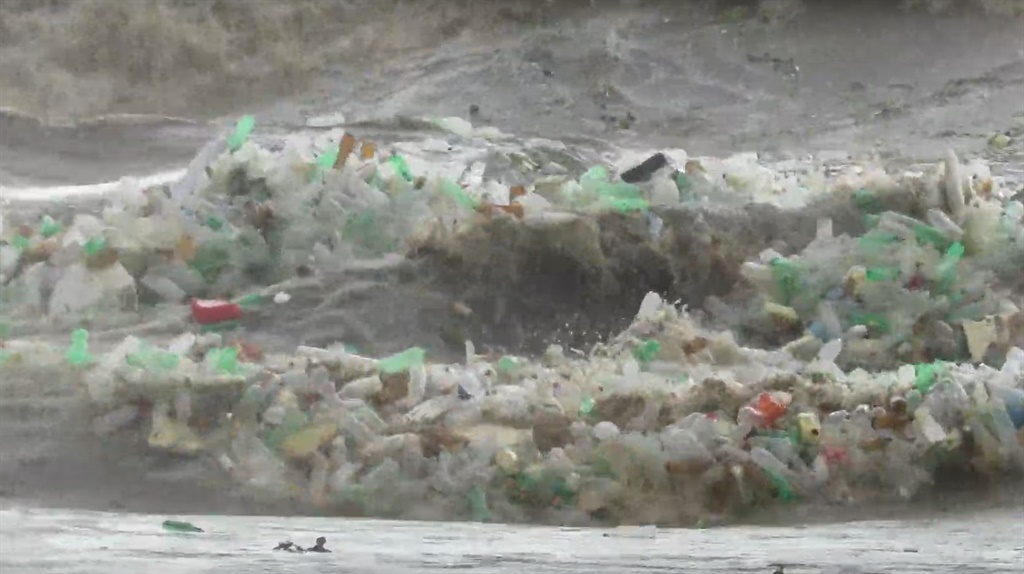 Whether it's a remote beach along South Africa's De Hoop Nature reserve, or the white sands of Clifton there is nothing as depressing as finding plastic where it shouldn't be. Just ask the team of scientists from The Beach Co-Op, a not-for-profit company that has been collecting marine debris at their local surf break, the rocky shore at Surfers Corner in Muizenberg, Cape Town since 2015. Just this last year they removed 434 kg of waste from Cape Town's coastline and waterways, which included some 9,127 cooldrink lids, 7,447 lollipop sticks, and 5,422 individual sweet wrappers.

It's a depressing sight that mirrors a global issue where beaches all over the world are filling up with waste. If not addressed urgently it could become so costly to manage you would need entire countries' wealth to mitigate.

This is according to a new report by global consulting firm Dalberg, and commissioned by the World Wide Fund for Nature (WWF), that in September released its Plastics: The cost to society, environment and the economy report which reveals the cost of the entire lifecycle of plastic made in just 2019, from production to degradation, to be $3.7 trillion (R52 trillion) - more than the GDP of India.

They say if plastic production continues under its current pattern, these costs are set to almost double to $7.1 trillion (R100 trillion) by 2040 which by then there could be as much as 600 million tonnes of plastic floating in the oceans.

From food packaging to buckets and disposable bottles, plastic is used widely because it's versatile, cheap, and convenient. But this convenience comes at a price, especially given most of it is designed for single-use and can survive for hundreds of years.

The report highlights South Africa as a case study stating it to be the 11th worst offender when it comes to leaking 79,000 tonnes of land-based plastic into the ocean in 2015 alone.

The reason: South Africa's waste management system is struggling to deal with the national plastic waste generation, resulting in a significant amount of plastic leaking into the environment. The number is so large that for every person 41kg of plastic waste is generated a year, above the global average of 29kg.

"But these estimated stats from the global model study (Jambeck et. al, 2015) have been updated with some local research. Even so, we are still one of the top polluters in Africa because of our extremely high consumption and lacking waste management," says Lorren de Kock, WWF South Africa's Project Manager: Circular Plastics Economy.

"The most shocking for me is our very high consumption – there is just too much plastic and so much of it either goes to landfill, open dumps, or leaks into nature. Our leakage rate is actually 107,000 tonnes per year."

This still pales in comparison to countries like Australia, that consumes 3.5 million tonnes of plastic waste a year and sees some 130,000 tonnes leaking into the environment. It produces more single-use plastic per capita than any other country except Singapore at 59kg per person per year.

Is there a silver lining?

There are several parties involved that are initiating change.

Just a few examples of hard work on the ground can be seen from the likes of The Beach Co-Op, #SeatheBiggerPicture and the Litterboom Project, that collects rubbish as it floats down rivers with giant booms. Not only do they help mitigate waste they also help scientists to gather data.

"As for upstream interventions, which are very much needed to prevent pollution in the first place, the South African Plastics Pact is doing great work with industry and government to transform the plastic packaging", says De Kock.

The voluntary initiative which was signed in 2020 has over 50 members – including Pick n Pay, Clicks, Woolworths, Spar, Unilever, Tiger Brands, and Checkers. It represents stakeholders across the value chain and has a focus on upstream interventions to address the problems with plastic packaging systemically.

"Some industry stakeholders are really trying to address the plastic challenge by rethinking their plastic packaging design. 80% of the environmental impacts of plastic packaging, or any packaging for that matter, can be addressed at the design stage," says De Kock.

"All stakeholders, not only consumers need to take plastic pollution more seriously. The stakeholders in the value chain with the most leverage to shift the system are the brands, retailers, and manufacturers. There is more awareness that the plastic problem is not only a waste management issue but also a production and consumption issue," says De Kock.

This was a key takeaway from the WWF report which found governments have focused on a too narrow scope, such as banning single-use plastic bags without addressing the real issue. Instead, the WWF wants policy makers to shift from linear models of waste management to circular models driven by recycling.

Government has also come to the party in some ways. The battle against plastic waste has been raging in South Africa since 2003, when it first implemented plastic bag levies.

Fast forward to 2021 and two key legislations have been gazetted:

The first, all plastic bags (including those imported) must contain at least 50% recycled material beginning in 2023 and will be entirely made from "postconsumer recyclates" in January 2027.

The second, requires manufacturers of plastic packaging, electronics, glass bottles, and cardboard, among other goods, to include an increasing amount of recycled material in their products and must also take responsibility for where their products end up.

"This extends the responsibility of companies who place packaging on the market to the end-of-life stage of that product. Which means financial and/or operational responsibility for end-of-life activities and incentives to design packaging for end of life for maximum circularity and diversion from landfill," says De Kock.

What does the WWF want to do next?

The WWF is calling on all governments to begin negotiations on a legally binding global treaty on marine plastic pollution at the UN Environment Assembly in February 2022.

The WWF is urging all UN member states to tackle all stages of the plastic lifecycle, stopping the leakage of plastic pollution into the oceans by 2030.

South Africa has so far failed to participate at a global plastic treaty meeting, the first of which was the Global Ministerial Meeting on Marine Litter and Plastic Pollution which took place from 1 to 2 September.

"It is disappointing that SA is not participating and presenting a public position on the global agreement. A no show would indicate that there is no interest in being part of this process with SA not being a signatory," says De Kock.

So far, 119 governments have signed on to endorse the new UN Treaty on Plastic pollution.

"We will continue to engage with national government because it is globally acknowledged that a global legally binding agreement on plastic pollution is required."