Since the start of the year, it is compulsory to install the new SANS 164-2 plug and outlet system. 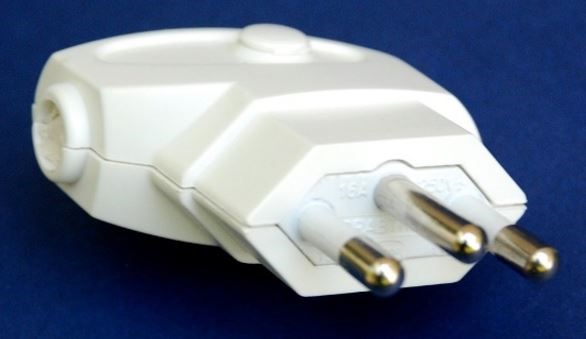 Here's what you need to know about the new power system:

It replaces the notoriously dangerous three-pronged, round pin plug. These plugs have been the standard since the 1950s, and have been blamed for fires and electrocutions. Unlike many other electricity systems across the world, the outlet came with a switch, to turn the plug on and off. This created the false impression of safety, when switched off.

Read: South Africa’s old three-pronged plug is a killer – here’s how we ended up with a notoriously dangerous electrical system

Also, while the plug pins should have been half-insulated to protect users from touching the conductive parts when inserting or pulling it from the socket-outlet, this was often not the case. The earthing of these sockets has been shown to be unreliable after a few years of use.

Finally, the large, open holes in the outlets have proven irresistible for kids to stick in objects into them.

The new system is compatible with European two-point plugs

The new SANS 164-2 plug has three pins, including an earth pin to protect the users from electric shock. But two pin plugs are still allowed in South Africa for products that do not require to be earthed, including cell phone chargers. The so-called "Europlugs" - two-point plugs (picture below) used across Europe - are compatible with SANS 164-2. The new SANS 164-2 socket-outlet can accept up to six plugs in one box. Three can be housed in the small 2x4 box as against only one of the old ones. It doesn’t come with a switch

SA’s old plug outlet system had a switch – but this was seen as dangerous because it creates the false impression of safety when it is switched off. In fact, you could still shock yourself if it was switched off. You can still include a switch in the new system.

The new outlet requires that the two live pins must be inserted simultaneously into the socket-outlet to open the shutters. This makes it safer than the old outlet – where babies could insert their fingers or kids could push other objects like pencils into open holes.

The new plug is much cheaper to produce

New installations need to include the SANS 164-2

You don’t have to change your existing plugs and outlets, but all new installations (in new buildings and if a new plug circuit is introduced) would need to include the new SANS 164-2 plug and socket-outlet system, says Tony McDonald, technical director of the Electrical Conformance Board, an industry body. But McDonald warns that you shouldn’t fit a combination socket with only one switch. “This could prove dangerous because the user may believe that all the sockets are dead when switching off that one switch, which may not be true. Choose sockets therefore either with no switches or sufficient switches to switch off each socket.”

“Some appliance manufacturers are saying that if you cut the old plugs off, you lose your guarantee.  This is not true, we have been assured by the NRCS [National Regulator for Compulsory Specifications] that as both of these sockets are South African standards and as such if your house if fitted with one or the other, it may be necessary for the plug top to be removed,” says McDonald.

See also: The best way to save a lot of money on electricity is probably not what you think