45% of your pension may soon be invested in SA infrastructure, under new draft rules 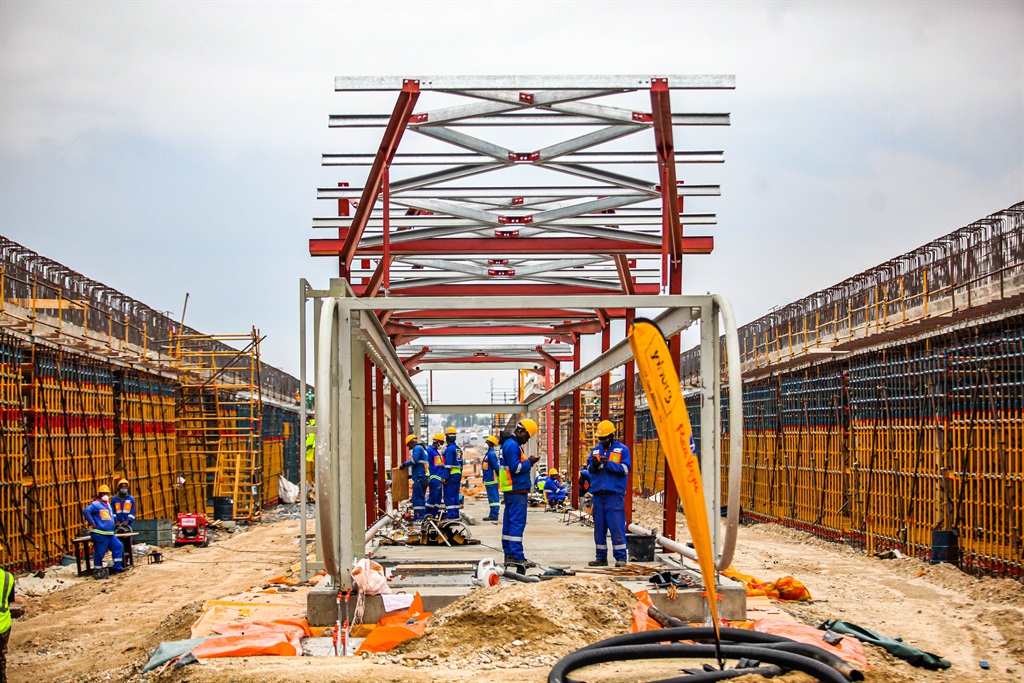 A construction site of the Rea Vaya route in Johannesburg. (Photo by Sharon Seretlo/Gallo Images via Getty Images)

Australian, Canadian, and Dutch pension funds have long invested in infrastructure – either via companies (or private equity funds) that run large projects, or even by directly investing into these projects themselves. For example, they would buy stakes in solar power plants, and earn returns from the electricity sold to customers. Or they would help to fund the building of roads, and earn toll fees as part of agreements with governments. In addition, governments may sign long lease agreement for big assets funded by these investors, who earn their returns that way.

International pension funds have also bought stakes in large infrastructure assets. More than a decade ago, for example, the Californian civil servant pension fund bought a 10% stake in Gatwick Airport in England. That turned out to be a very lucrative move.

Now the South African government wants to change Regulation 28 of the Pension Fund Act to encourage retirement funds to do the same here.

Regulation 28 puts limits on where pooled retirement money can be invested. For example, a pension fund cannot invest more than 75% of the fund in shares, and there are also limits to how much can be invested overseas, in listed property, and in other assets.

Some retirement funds already invest in infrastructure via “alternative investments”, including hedge funds, and private equity funds. But pensions funds are not allowed to invest more than 15% of their savings in these kinds of funds.

Importantly, pension funds are not obliged to invest any money in infrastructure - but they can if they want to.

The new draft proposal has a separate new investment limit in private equity (15%), along with a maximum of 10% for hedge funds, and 2.5% for other alternative assets. Pension funds can also invest in infrastructure via shares in companies that are involved in the sector. Or they can buy bonds that fund specific projects, or are issued by large infrastructure investors like the Industrial Development Corporation and the Development Bank of Southern Africa.

What returns can be expected from infrastructure?

There is already a track record of investment infrastructure in South Africa.

Futuregrowth, which is part of Old Mutual, has invested billions in all kinds of infrastructure – including in 29 independent power producers - over the past 25 years. Its Futuregrowth Infrastructure and Development Bond Composite fund has more than R15 billion in assets under management, delivering an average annual return of 12% since 2000 by investing in government bonds and other vehicles that fund infrastructure projects.

In an opinion piece, published in Business Day last year, Eskom Pension and Provident Fund chief investment officer Ndabe Mkhize said infrastructure equity investments should deliver about 12% to 16% a year. “But what’s especially attractive about such returns is that they tend to be dependable and predictable over the long term — annuity income that can be relied upon to materialise,” he added.

Until now, there hasn’t been much appetite for these kinds of investments, however, as some of South Africa’s largest infrastructure projects – Kusile and Medupi, for instance – were mired in mismanagement, and widespread government corruption has undermined investor confidence.

But this time, pension funds may bite.

Covid-19 has wreaked havoc on one of the retirement industry’s favoured asset classes, property, which used to deliver solid returns and payouts.

Now South African offices and malls continue to bleed tenants as the pandemic fall-out continues. Rental rates are being slashed, and it could be years before the sector recovers. Suddenly, infrastructure investments may start to look more interesting.

Some pension funds could start seeing infrastructure as an alternative to property, one executive at a large fund manager told Business Insider SA.

Related Links
British millionaire ordered to demolish his chateau in France after he 'forgot' to get building...
Building relationships remotely, and not technology, has been the key to handling the pandemic,...
Inside the legendary Aus store that Woolies just sold, after spending billions on renovations
Next on Business Insider
An unknown Chinese buyer spent R6 billion on ships for risky Russian oil transfers on the high seas