860 hours of load shedding: These graphs show the sorry state of SA electricity

As South Africa struggles with another bout of load shedding, a new report by the Council for Scientific and Industrial Research (CSIR) paints a grim picture of the country's ability to generate electricity.

The report, prepared by Joanne Calitz and Dr Jarrad Wright, was released this month based on last year's electricity data. It shows that South Africa had 859 hours of electricity rationing last year - almost 10% of time. For most of these hours, the country suffered Stage 2 load shedding.

It was the "most intensive" year for load shedding ever, the report found.

It's clear that the economic paralysis due to Covid-19 and associated lockdowns "saved" the country from even more power interruptions: 63% of the load shedding took place in the weeks before lockdown started at the end of March. 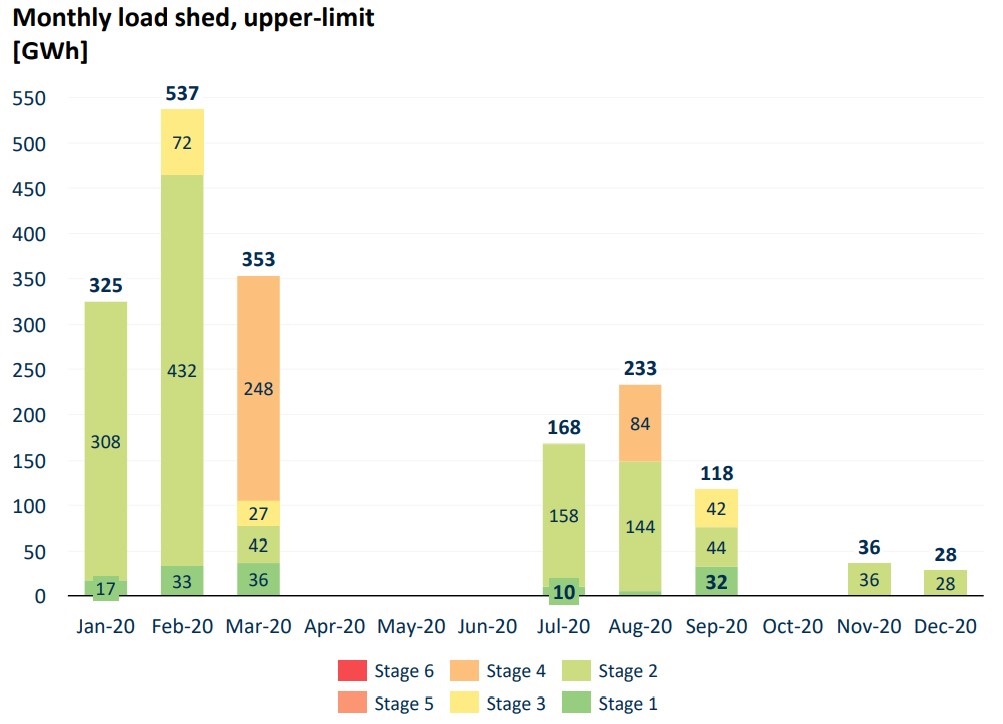 Just how Eskom's ability to generate electricity has deteriorated is clear from this graph, which shows that production declined by almost 9% since 2010 - and this is despite the more than R450 billion spent on Medupi and Kusile power stations. Medupi and Kusile have such serious design flaws that they must be taken out of commission for weeks at a time, to do corrective work.

This weekend, Medupi was also hit by an unplanned breakdown in power generation, Eskom said.

The utility has also again struggled with breakdowns at its older power stations, in particular Kriel and Kendal, in recent days. The average age of Eskom's coal-fired power stations is forty years.

The stations still contributed 83.5% to system demand in 2020, the report found.

But renewable energy now contributed more than 10% - more than double that generated by way of nuclear. And there has been rapid growth in the contribution of sustainable power sources over recent years.

This graph shows where electricity supply comes from during different hours of an average day. Related Links
Offshore wind farms in 3 spots could supply all of SA’s electricity – 8 times over, academics find
Govt entities now owe municipalities more than R20 billion – and growing fast
Eskom needs R1 billion a week from government to keep the lights on in 2021
Next on Business Insider
Biden says monkeypox cases are something 'everybody should be concerned about'