As Sweden's and Finland's NATO bids move forward, the alliance is already eyeing their fighter jets 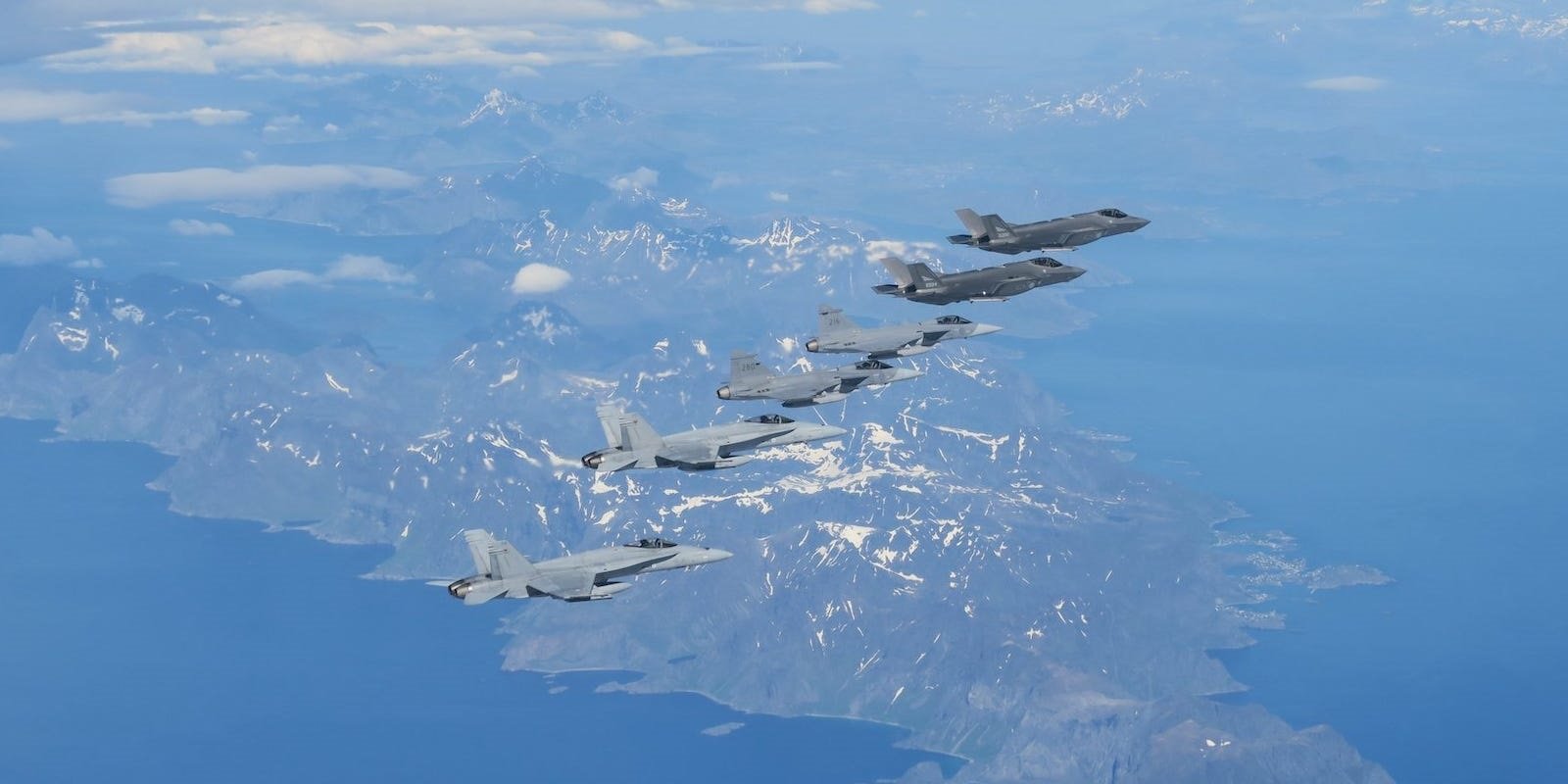 As Finland's and Sweden's accession to NATO moves ahead quickly, the alliance's already tight partnership with the Nordic countries was on display in the skies over Northern Europe in early June.

On 2 June, the Swedish and Finnish air forces drilled with their British, French, German, Norwegian, and Belgian counterparts along Norway's west coast.

Some 45 aircraft participated in the exercise, which was meant to demonstrate the ability to conduct complex air operations over long distances. A German Eurofighter Typhoon refuels from a US KC-135 over the Baltic Sea during BaltOps 22, June 9, 2022.
US Air Force/Senior Airman Nicholas Swift

The chief of the Norwegian air force said it was "the first time we are conducting such an advanced exercise with NATO and partner nations, which also includes Sweden and Finland."

From 5 June to 17 June, Finnish and Swedish forces joined the militaries of 14 NATO members, including the US, for Baltic Operations 2022. The 51st iteration of the maritime-focused exercise involved over 45 ships, more than 75 aircraft, and 7,500 personnel.

During one drill, a US Air Force KC-135 tanker refueled US, Finnish, Swedish, and German jets, allowing them to keep operating over the Baltic. The June exercises not only demonstrated the strong relationship Finland and Sweden have with their NATO neighbors but also their own considerable military capabilities, which will significantly strengthen NATO's air component and deterrence in the north.

Finland currently operates a fleet of 55 McDonnell Douglas F/A-18C Hornets, which it acquired in the 1990s. Despite its age, the single-seat F/A-18C is capable aircraft and can quickly switch between fighter and attack configurations. It is also operated by the US Navy and Marine Corps and a number of US allies, and it has seen combat in North Africa, the Middle East, and the Balkans.

Finland's Ministry of Defense has said its Hornets will be decommissioned by 2030, making way for the 64 F-35As that Helsinki ordered in December in the country's biggest military procurement on record. Its first F-35 is scheduled for delivery by 2026. Finland's government authorized the purchase of the F-35 to be its next multirole fighter on December 10, 2021.
Finnish Air Force

The fifth-generation F-35A is increasingly popular among US allies. The stealth jet can act as a fighter or attack platform and use its intelligence, surveillance, and reconnaissance capabilities to enhance the effectiveness of friendly air and ground forces.

Sweden's only fighter jet is the Saab JAS.39 Gripen, a domestically designed and built aircraft that is less advanced but highly effective.

"The Gripen doesn't have the stealth of an F-35 or the brain-mashing performance of an F-15, but it's a reliable and cost-effective aircraft that brings a number of important capabilities into the fight," aviation analyst and Sandboxx editor-in-chief Alex Hollings told Insider.

The Gripen is also versatile. Its small size allows it to "take off and land on austere airstrips or even highways while carrying extremely effective air-to-air weapons" like the Meteor and AMRAAM missiles, Hollings said.

The Swedish jet is one of the few fighters in service that can supercruise, maintaining supersonic speeds without dumping fuel into its afterburner. That increases an aircraft's endurance at supersonic speeds by lowering its fuel consumption, allowing it to fly faster and carry less fuel. The US-made F-22, the French-built Dassault Rafale, and multinational Eurofighter Typhoon are the only other jets that can supercruise. None of Russia's jets have the capability.

The Gripen program has had controversy, Hollings said, referring to allegations of fraud in some of its foreign sales, but it was designed to be "easy to fly, inexpensive to maintain, and quick to adopt upgrades and that all makes for a handy jet to have around in a fight," he added.

Although it has never seen combat, the Swedish jet has proven its worth in exercises. Notably, during the first day of a major US-led exercise in Alaska in 2016, it scored 10 kills against peer aircraft, including a 4.5-generation Eurofighter Typhoon, without suffering a casualty.

Sweden's air force operates 71 Gripen Cs and has ordered 70 Gripen Es, an upgrade over the -C model, to be delivered by 2027. Despite their capabilities, integrating two air forces with a combined fighter fleet of 126 aircraft into NATO operations won't be simple.

Although the F/A-18C and the Gripen are both used by other NATO members, tactical integration is achieved through frequent joint exercises, like the ones conducted in June.

"There are always challenges inherent to mixing national air forces and the platforms they operate," Hollings told Insider. "Once you work through interoperability (in terms of both technology and tactics), a mix of aircraft becomes a potent tool in a large-scale fight."

Increasing the variety of aircraft in NATO will give the alliance a tactical advantage. "Fighters operate a bit like cage fighters, in that pilots want to play to the strengths of their own aircraft and the weaknesses of the opponent's," Hollings said. "When you head into a fight with a variety of fighters at your disposal, each playing to their respective strengths, you really complicate the combat calculus for your opponent."

F-35As and Gripen Es will make Finland's and Sweden's air forces more capable, but even without those advanced jets, NATO leaders are eager to have Finnish and Swedish forces in the alliance.

Gen. Christopher Cavoli, who will take over as head of US European Command and as Supreme Allied Commander Europe in July, said during his nomination hearing in May that the Finnish and Swedish militaries will bring "quite a bit of capability and capacity to the alliance from Day One."

"I look forward to the accession of Finland and Sweden to the alliance from a military perspective," Cavoli added.

Constantine Atlamazoglou works on transatlantic and European security. He holds a master's degree in security studies and European affairs from the Fletcher School of Law and Diplomacy. You can contact him on LinkedIn.