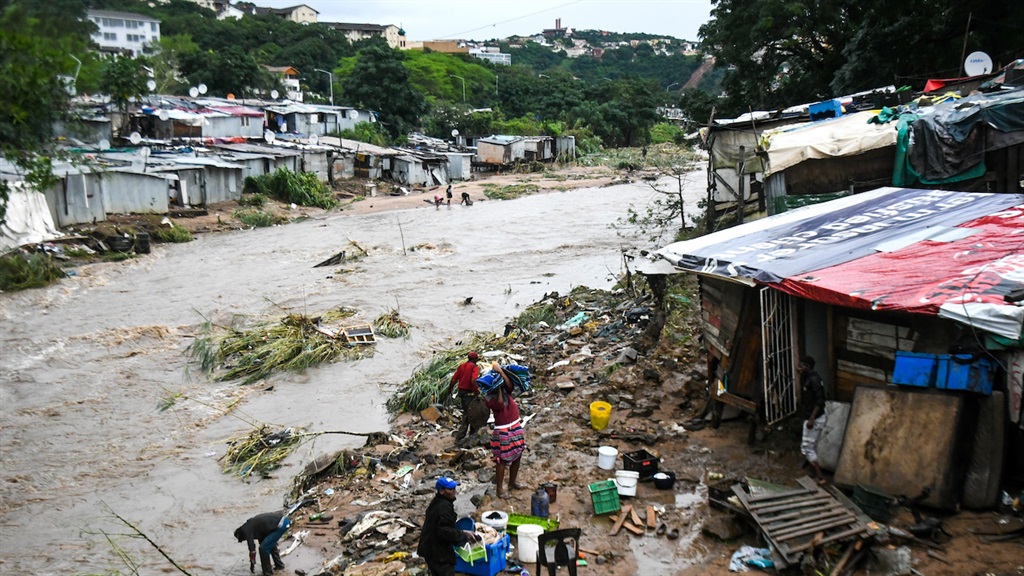 Flooding outside Durban on 12 April 2022. (Photo by Gallo Images/Darren Stewart)

"These floods are a tragic reminder of the increasing frequency of extreme weather conditions as a result of climate change," he said. "We need to increase our investment in climate adaptation measures to better safeguard communities against the effects of climate change."

This added spending must come even as South Africa reduces its emissions, he said, as part of global efforts to mitigate the extent of climate change.

In the meanwhile, money spent on recovering from the current disaster must be spent wisely, and without fraud, he said.

Ramaphosa announced the elevation of the KwaZulu-Natal floods to the status of a national disaster – just days after it had been formally classified as a provincial disaster. That moves responsibility for co-ordination of the response to the disaster, including high-level decisions on how money should be spent, from the KZN provincial executive and into the hands of Ramaphosa's cabinet.

"Given the extent and impact of the floods, the designation of a provincial state of disaster is inadequate to deal with the scale of the emergency, and the required reconstruction and rehabilitation measures, and responses," he said, citing the importance of the Durban port to the national economy.

"With the heavy rains and flooding in the Eastern Cape, and indications from the South African weather service that the North West and Free State may also be affected by bad weather, it is clear that there are other areas of the country that need emergency intervention as well," Ramaphosa said.

Ramaphosa spent a significant portion of his national address, of a type exceedingly rare outside of announcements on Covid-19, talking about measures to prevent corruption in the spending of disaster-relief funds.

"It will be critical, as we undertake this work, that all the resources we mobilise are used for their intended purposes and reach the intended recipients," he said.

At least some government relief funding will flow via the Solidarity Fund set up to handle donations around Covid-19, Ramaphosa said. And an "oversight structure" will be set up to ensure that, with representatives from the office of the auditor general, business groups, religious organisations, as well as engineers and accountants.

"We are determined that there must be transparency and accountability as the projects are costed and implemented, as well as how resources are deployed, right from the beginning, not after the money has either been wasted or stolen," Ramaphosa said.