NASA is slowly powering down the Voyager probes. Here are 18 photos from its 45-year mission. This montage shows examples of striking images of the solar system taken by Voyager 1 and 2 on their missions. NASA/JPL/Insider

The Voyager probes are pioneers of science, making it further into space than any other object made by humans.

Originally sent on a four-year mission to Jupiter and Saturn in 1977, the twin probes exceeded all expectations, and are still going 45 years later.

Among their achievements are the amazing photos of the solar system they beamed back before the cameras were shut down.

But now, they face a terminal problem: their power is running out, and NASA scientists are starting to shut down even more instruments on board to conserve energy.

As they near the end of their mission, here are 18 images from Voyager that changed science:

The Voyager probes were designed to visit Jupiter and Saturn. The Voyager mission was made up of two probes, Voyager 1 and 2, which were launched in 1977 within a few months of each other.

The launches capitalised on a rare alignment of planets that allowed them to turbocharge their journeys into space.

They originally were built to last five years, but have exceeded that lifespan many times.

This is what Voyager saw on its approach to Jupiter. A timelapse taken by Voyager 1 as it approached Jupiter in 1979. NASA/JPL

Voyager 1 and 2 reached Jupiter in 1979. They took about 50,000 pictures of the planet altogether, which greatly exceeded the quality of the pictures taken from Earth, according to NASA.

The pictures taught scientists important facts about the planet's atmosphere, magnetic forces, and geology that would have been difficult to decipher otherwise. 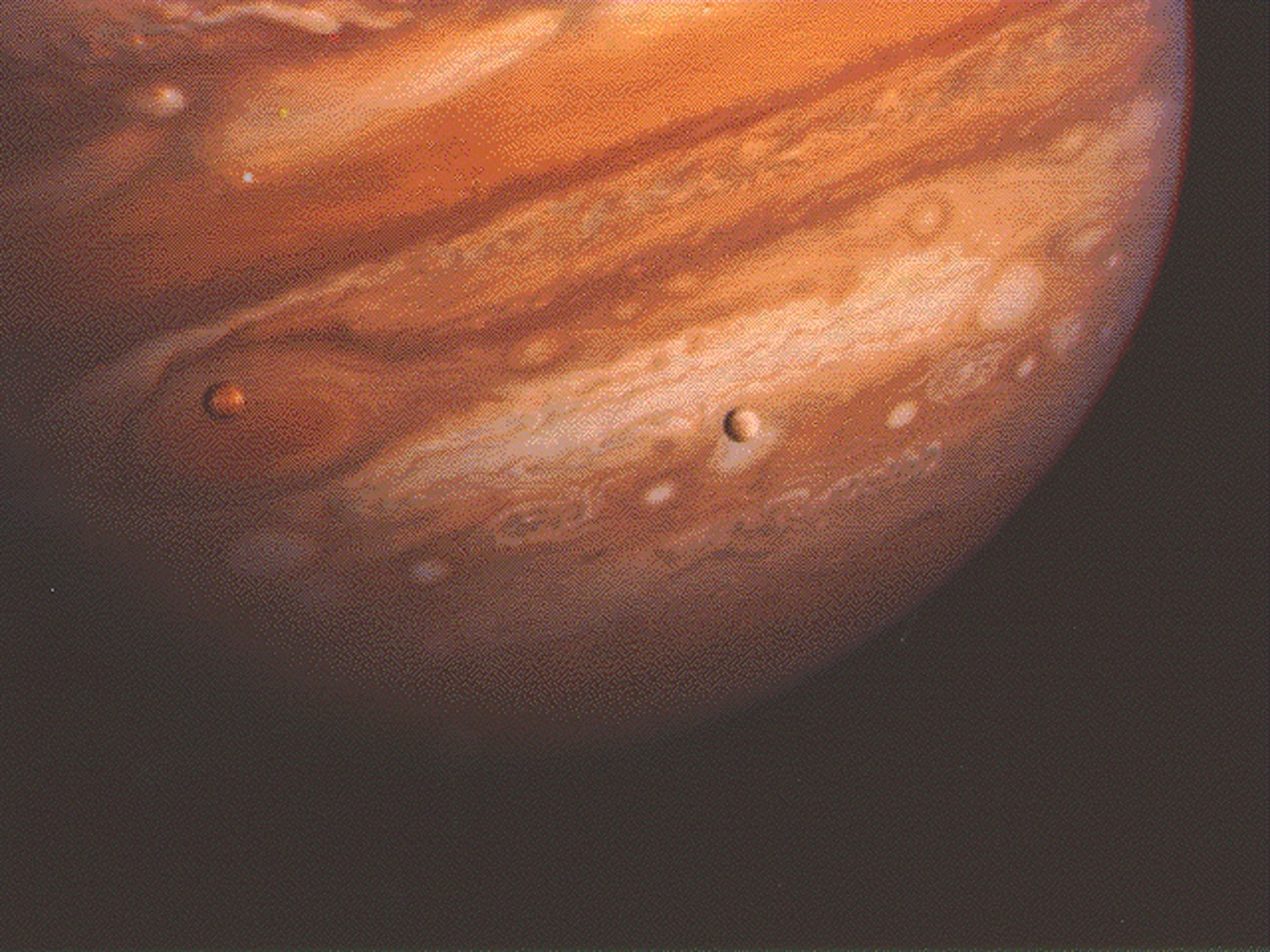 Jupiter and two of its moons, as seen by Voyager. NASA/JPL

As well as a thin ring around Jupiter A false-colour image of Jupiter's ring, discovered by Voyager. NASA/JPL

The probe captured this picture as it was looking back at the planet backlit by the Sun. A picture taken by the Voyager probes uncovered volcanoes at the surface of Io. NASA/JPL In 1980 and 1981, the probes reached Saturn. The flyby gave unprecedented insight into the planet's ring structure, atmosphere, and moons. 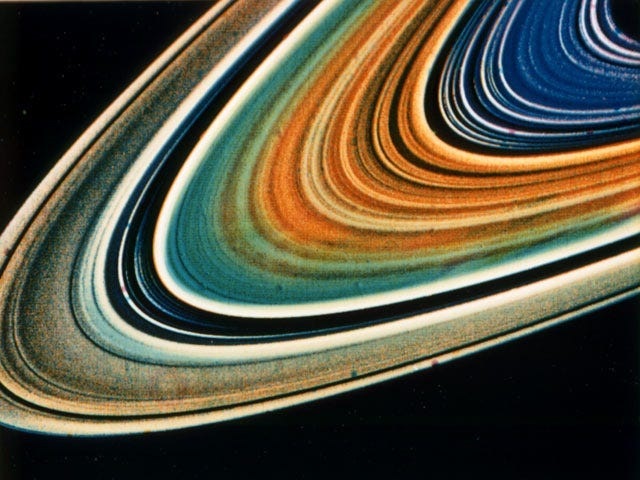 Saturn's rings are shown in false colour in a picture taken by a Voyager probe on August 23, 1981. NASA

Enceladus, Saturn's moon, was seen in unprecedented detail by Voyager. Enceladus, one of Saturn's moons, is seen by Voyager. NASA/JPL

This picture, taken as the probe flew away, provided a unique view of the planet, letting us see the part in shadow. Voyager 1 looked back to Saturn on November 16 1980 to give this unique perspective on its rings. NASA/JPL Voyager 2 captured these images, in true colours (left) and false-colour (right) of Neptune in 1986. NASA/JPL

Voyager 1 continued straight on and would not come across another planet on its journey out of the solar system.

But Voyager 2 kept on its exploration of our nearest planets, passing within 50,600 miles of Uranus in January 1986.

It discovered an extra two rings around Uranus, revealing the planet had at least 11, not 9. Here is a picture of Miranda, Uranus's sixth-biggest moon.

Voyager 2 was the first spacecraft to observe Neptune close up. Neptune, seen in false color by Voyager 2 in 1989. Here's the red or white colour means that the sunlight is going through a methane-rich atmosphere. NASA/JPL

A picture shows the blue Neptune in full. Here, the crescent shape of Neptune's south pole was seen by Voyager as it departed. Voyager 2 would never take pictures again. Since it wouldn't come across another planet on its ongoing journey, NASA switched off its cameras after its flyby of Neptune to conserve energy for other instruments.

Voyager took 60 images of the solar system from about 4 billion miles away.

The solar system's portrait was provided by Voyager 1 in 1990. NASA/JPL

As its last photographic hurrah, Voyager 1 took 60 images of the solar system from 4 billion miles away in 1990.

It gave us the Earth's most distant self-portrait, dubbed the "pale blue dot" This is the Earth, seen from 4 billion miles away. NASA

This is likely to remain the longest-ranging selfie in the history of humankind for some time, a portrait of the Earth from 4 billion miles away.

After this picture, Voyager 1's cameras were also switched off to save energy. It is possible for the probes' cameras to be switched back on, but it is not a priority for the mission.

Beyond the solar system This artist's concept shows the general locations of NASA's two Voyager spacecraft. Voyager 1 (top) has sailed beyond our solar bubble into interstellar space, the space between stars. NASA/JPL-Caltech

Though the probes are no longer sending pictures, they haven't stopped sending crucial information about space.

In 2012, Voyager 1 became the first human-made instrument to cross into interstellar space by passing the heliopause, the boundary between our solar system and the rest of the universe.

Voyager 2 was the second, crossing the boundary in 2018. It then revealed there was an extra boundary surrounding our solar bubble.

The probes keep sending back measurements from interstellar space, like weird hums likely coming from vibrations made by neighbouring stars.

Even after their instruments are switched off, the probes' mission continues A collage shows the two sides of NASA's golden record, which is onboard the Voyager probes. NASA/Insider

Now NASA is starting to switch off the probes' last instruments with the hope of extending their life to the 2030s.

But even after all instruments become quiet, the probes will still drift off carrying the golden record, which could provide crucial information about humanity should intelligent extraterrestrial life exist and should it come across the probes.