Photos shows NASA's newly-assembled megarocket, its most powerful since the 1960s 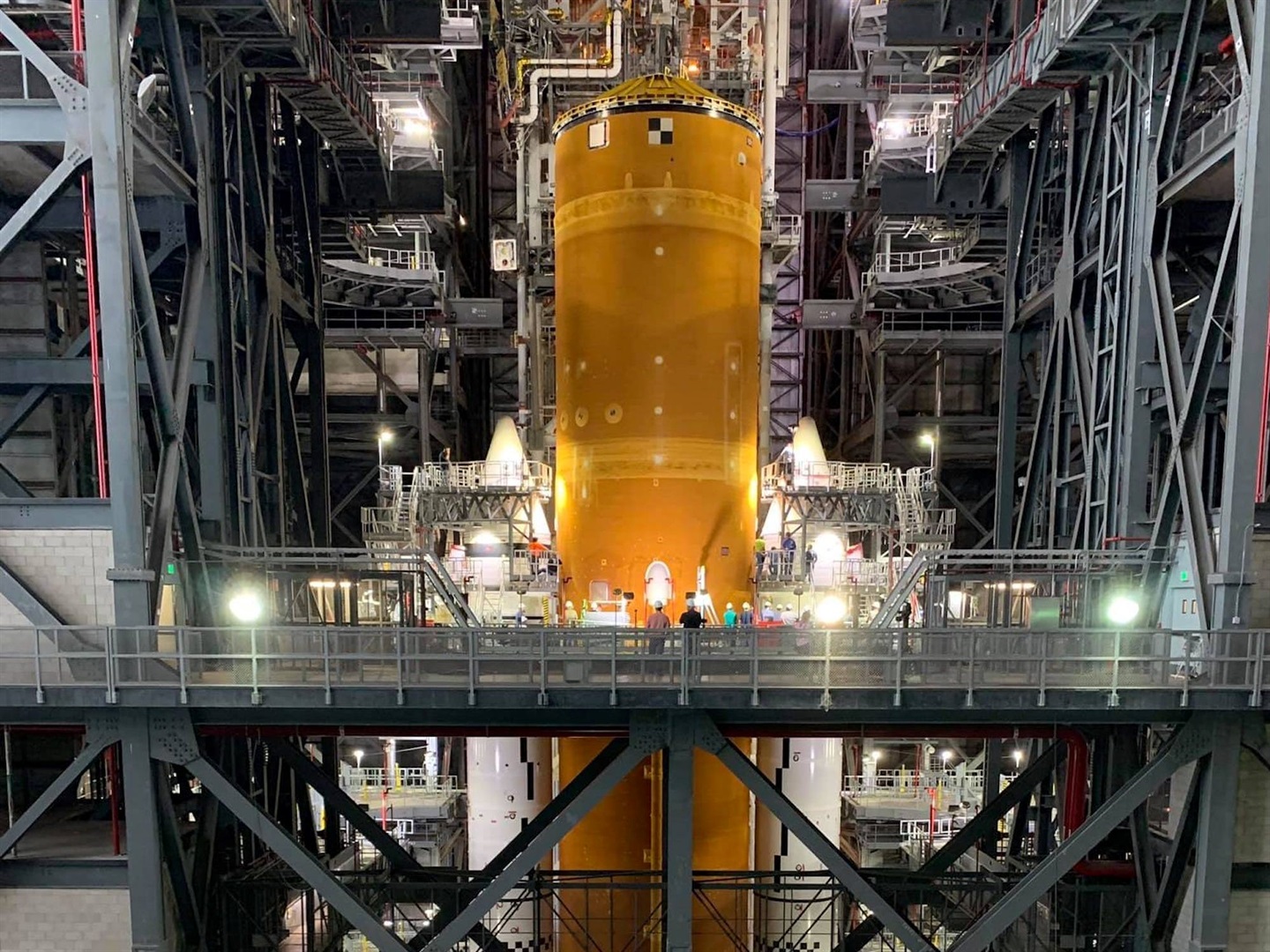 The core module of the Space Launch System placed between the two booster rockets.
NASA

NASA has released new photos of its newly-assembled Space Launch System (SLS) megarocket, its most powerful launch vehicle built since the 1960s.

The launcher will be the first SLS rocket, a new type of rocket designed to bring astronauts to the moon - and eventually to Mars, the BBC reported.

NASA aims to launch the rocket by November 2021, one of a series of missions aimed to send humans back to the moon for the first time since 1972.

This photo shows the 65-metre core module of the rocket, which was placed in between the smaller booster rockets:

The @NASA_SLS #Artemis I core stage has been lowered down onto the mobile launcher in High Bay 3 of the Vehicle Assembly Building at @NASAKennedy. Teams are continuing work to secure the core stage to the solid rocket boosters for @nasaartemis I. pic.twitter.com/cINDCwDP7V

And this timelapse shows the 85 tonne core stage being lifted after assembly, ready to be added to the boosters:

Engineers with Exploration Ground Systems and @JacobsConnects lifted the @NASA_SLS rocket core stage for the @NASAArtemis I mission in the Vehicle Assembly Building at @NASAKennedy. Check out this timelapse from operations. pic.twitter.com/Vnv6GnJ7VX

The first version of the SLS rocket is called Block 1. Once assembled, the rocket would weigh about 4,000 tonnes, and stand 110-metres tall.

The powerful launcher is able to carry around 27 tonnes pounds to orbit. That's enough to carry the Orion space capsule, which will be used to bring astronauts to space in future missions.

Before it is fully assembled, the core module needs to be topped by an adapter, and the space capsule needs to be lowered onto the rocket to top it off. The assembly of the core module to the rocket boosters marks the end of the second stage of the rocket's assembly.
NASA

The rocket should carry humans to the moon by 2024

NASA aims to launch the rocket on its first flight as early as October 2021. The rocket's maiden flight is the first of three missions NASA has planned to bring humans back to the moon.

If the missions succeed, the first man in over 50 years, and the first-ever woman, could return to the Earth's satellite by 2024.

This first mission will be unmanned because it aims to test the rocket's ability to bring the capsule to the moon and back, as Insider previously reported. The core module is flanked by two powerful rocket boosters

The twin boosters on either side of the rocket's core module - pictured below before the core module was lowered between them - can produce 1,600 tonnes of thrust in just two minutes to lift the rocket into space. The core stage itself has powerful engines, producing about 900 tonnes of thrust.

After a failed first attempt, the core modules' engines were successfully fired for around eight minutes on May 18, clearing the way for the rocket's assembly.

The engines will provide the power to make the Orion space capsule travel at a speed of 40,000 kilometres per hour, the speed needed to send it to the moon.

NASA plans to use SLS launchers to go to Mars

SLS rockets are NASA's modern equivalent to the Saturn V launchers, which were used in the Apollo missions.

Saturn V launchers have not been of as much use in the past 20 years, during which astronauts have been going to the International Space Station, the BBC reported. But the moon is about 1,000 times farther from Earth, so a more powerful launcher is needed.

NASA has big ambitions for the SLS rocket. It is designed to be flexible and adaptable, and could be used to send missions to Mars, Saturn, or Jupiter.

An infographic shows the next steps for the SLS rocket, with plans to give it capacity to go to Mars.
NASA

The next version of the rocket, Block 2, will be designed to carry more than 46 tonnes of payload.

It will be the "workhorse vehicle" for sending cargo to the Moon, Mars, and other deep-space destinations, according to NASA.