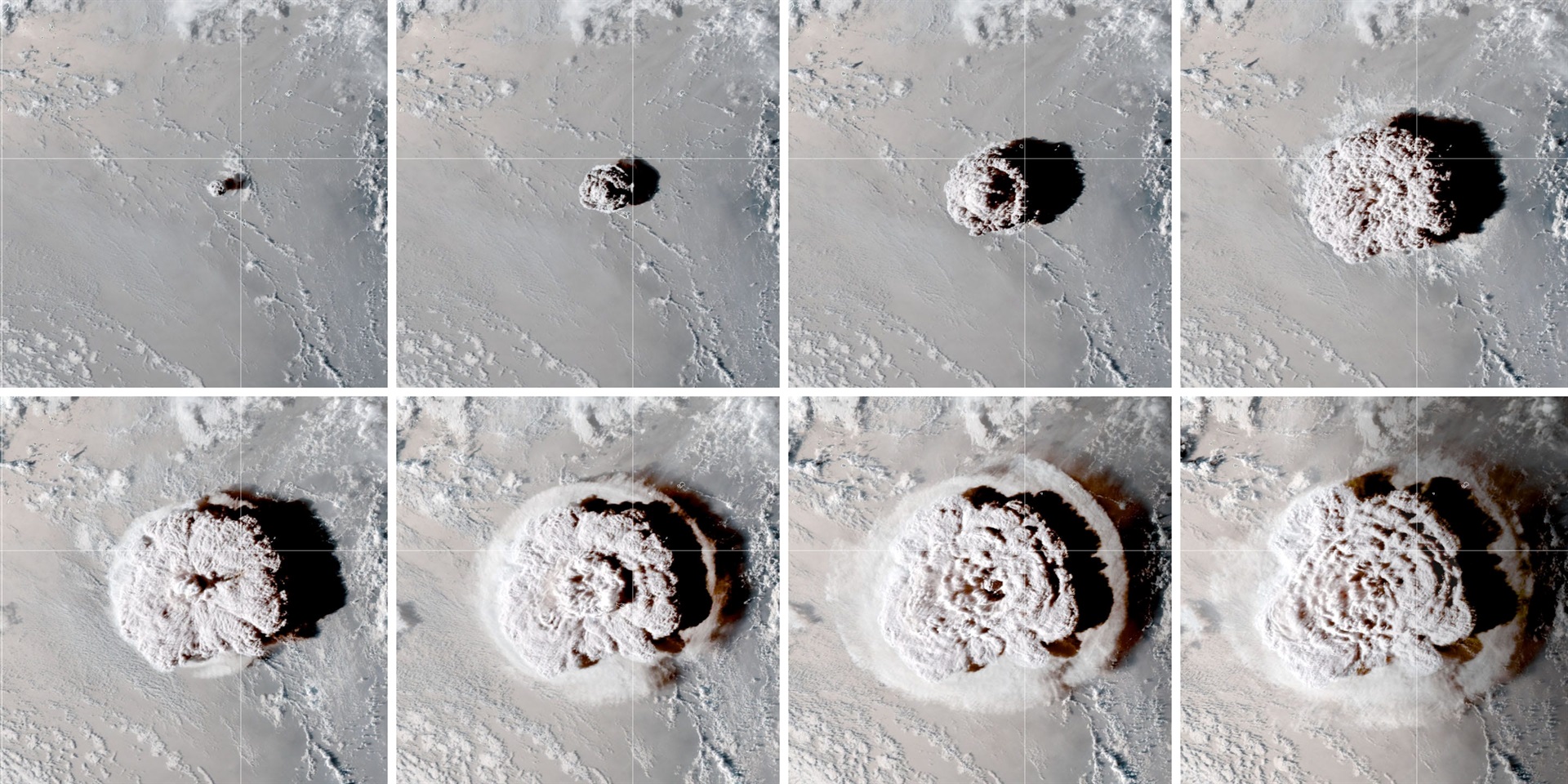 A sequence of still images from the GOES-17 satellite shows the Tonga plume at various stages on January 15, 2022.

When a volcano in Tonga erupted on January 15, it gave satellites their first glimpse at a plume of volcanic ash shooting into the mesosphere, the third layer of Earth's atmosphere.

According to NASA, the Tonga event was the largest volcanic eruption since satellites began monitoring our planet. As the Pacific volcano shot a burst of ash and gases into the sky, with the force of about 10 megatons of TNT, two weather satellites were passing overhead.

The spacecraft — the National Atmospheric and Oceanic Administration's GOES-17 and the Japanese Aerospace Exploration Agency's Himawari-8 — captured the eruption in infrared every 10 minutes for about 13 hours.

NASA scientists analysed the satellite imagery to determine that the initial outburst of ash rocketed 57 kilometres high, breaching the mesosphere — the region where meteorites falling to Earth burn up and create shooting stars streaking across the night sky.

It took the volcanic plume about 30 minutes to travel that high. Then a secondary plume rose more than 50 kilometres. Both are visible, in yellow, in the satellite imagery below. The upper part of those plumes turned to gas and dissipated almost immediately because of dry conditions in the mesosphere. "The intensity of this event far exceeds that of any storm cloud I have ever studied," Kristopher Bedka, a NASA atmospheric scientist who specialises in extreme storms, said in a statement on Wednesday. "We are fortunate that it was viewed so well by our latest generation of geostationary satellites, and we can use this data in innovative ways to document its evolution."

Prior to this, the biggest known volcanic plume ever captured by satellites was Mount Pinatubo's 1991 eruption, according to NASA. That plume shot 35 kilometres above the Philippines, well into the stratosphere, but fell short of reaching the mesosphere. Lightning strikes amid an eruption of the Hunga Tonga-Hunga Ha'apai volcano, January 14, 2022, in a screenshot from a social media video. Tonga Geological Services/Reuters

The Tonga volcano was once completely underwater. It captured scientists' attention in 2015, when it erupted beneath the ocean and suddenly rose, creating a landmass that connected two preexisting islands: Hunga Tonga and Hunga Ha'apai.

Nearly a decade of low-level volcanic activity culminated in a series of violent eruptions in January, which wiped out the newborn island and took off large chunks of Hunga Tonga and Hunga Ha'apai.

That land was uninhabited, but the eruption and the tsunami it triggered destroyed homes, boats, and fisheries in populated islands nearby, and severed the undersea internet cable that keeps Tonga online. Three people died in the aftermath of the eruption. The World Bank estimates that the event caused $90.4 million in damages — 20% of Tonga's GDP.

To map the ash plume from the initial eruption, Bedka and his NASA colleague, Konstantin Khlopenkov, used images from the two satellites, the same way our brains use images from our two eyes. They ran an algorithm that compared the images from the satellites, and the different angles at which they were taken, to construct a 3D profile of the plume. It's a technique they developed to study severe thunderstorms in the stratosphere.

"The combination of volcanic heat and the amount of superheated moisture from the ocean made this eruption unprecedented. It was like hyper-fuel for a mega-thunderstorm," Bedka said, adding, "The plume went 2.5 times higher than any thunderstorm we have ever observed, and the eruption generated an incredible amount of lightning."

According to a global lightning-detection network run by the Finnish company Vaisala, the eruption triggered 400,000 lightning strikes over the course of six hours.

"That is what makes this significant from a meteorological perspective," Bedka added.