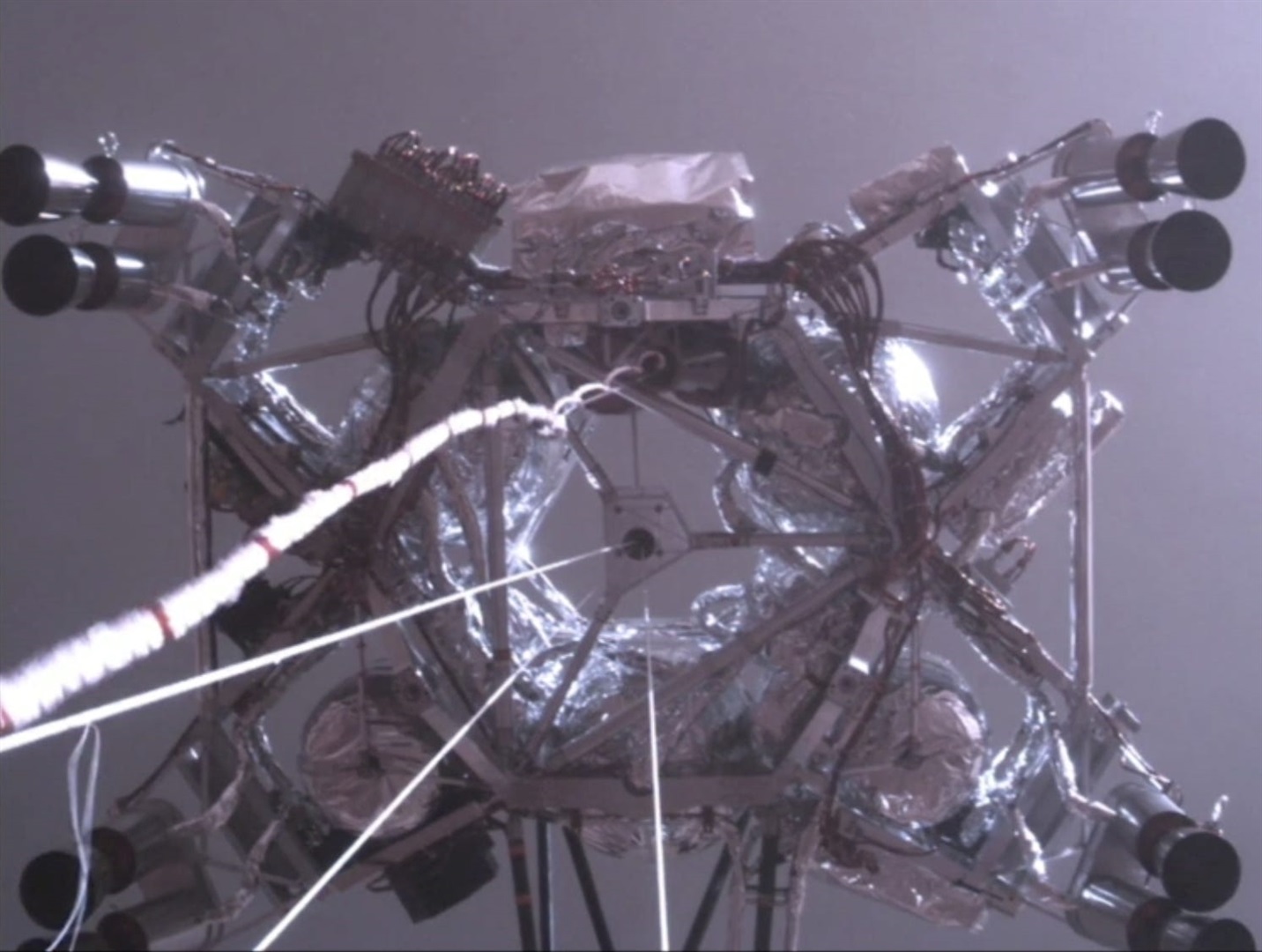 In a screengrab from NASA's video, a camera on Perseverance records the jetpack lowering the rover to the Martian ground.
NASA

The footage was recorded on Thursday as the robot plummeted to Mars, deployed a parachute, and to a safe landing spot using a jetpack.

Landing on Mars is a high-stakes, high-speed feat with only a 50% historical success rate. Perseverance managed to not only stick the landing, but also recorded the entire plunge with five ruggedized commercial cameras. (There were six, but one failed.)

All in all, the cameras captured over 23,000 images of the vehicle descending to Mars. NASA released the resulting footage on Monday. The three-minute video below is the first of its kind. No previous spacecraft has ever captured itself descending to Mars.

"These videos and these images are the stuff of our dreams. It's what we've been dreaming about for years," Al Chen, who led the rover's entry, descent, and landing process, said in a NASA briefing on Monday.

Engineers also equipped the rover with a microphone to record the landing, but it did not capture any audio.

What you're seeing in that video

Five cameras together recorded the rover's descent, starting as the capsule carrying Perseverance deployed a 70-foot-wide parachute as it fell toward Mars at about 12,000 mph. Three cameras were trained on the parachute to capture it ballooning above, though one of those didn't work. The parachute slowed the capsule's fall to about 150 mph - twice the speed of a falling skydiver on Earth (sans parachute). Then the capsule jettisoned its heat shield, exposing the rover's belly and a camera that surveyed the ground below. That camera revealed the landing site in Mars' Jezero Crater growing larger and larger as the rover neared the ground.

About 3.5 billion years ago, rivers flowed into this ancient impact basin, feeding a lake that may have sustained microscopic alien life. Perseverance aims to explore the dried-up lake bed in search of fossils of ancient microbes. The cliffs of the river delta appear on the right side of the video. A screengrab from NASA's video shows Jezero Crater below the Perseverance rover as it descends, with the river delta cliffs on the right.
NASA

About a mile above the Martian surface, the capsule dropped the rover with a jetpack strapped to its back. In the video, this maneuver produces a bright flash of light about 2 minutes and 5 seconds in.

The jetpack then fired its engines and steered Perseverance toward a safe, flat landing spot. The ground-facing camera shows Martian dust swirling as the jetpack approaches. A photo of NASA's Perseverance rover just feet above the Martian surface - part of a video recorded of the landing on February 18, 2021.
NASA/JPL-Caltech

This whole entry, descent, and landing process took just seven minutes - the "seven minutes of terror," as some engineers call it.

"I can watch those videos for hours and keep seeing new stuff every time," Chen said.

Prior to Perseverance, the closest NASA ever came to capturing video of a Mars landing was a stop-motion movie that Curiosity captured of the ground below as it descended to Mars. In that footage, the only part of the landing process one can actually see is the heat shield falling away. Perseverance is NASA's fifth and most sophisticated Mars rover. It launched from Cape Canaveral, Florida, in July and traveled nearly 300 million miles to reach the red planet.

The rover is poised to spend the next two years scouring the river delta of Jezero Crater for signs of ancient alien life. The water that once flowed into the crater would have deposited mud and clay where it met the lake. If there was microbial life on ancient Mars, it could have been trapped and immortalized in those mineral deposits.

The first high-resolution, color image sent back by the Hazard Cameras on NASA's Perseverance Mars rover after its landing on February 18, 2021.
NASA/JPL-Caltech

But Perseverance's immediate first steps are to make sure all its systems and scientific instruments are working. Over the next few weeks, mission controllers will oversee those checks and upgrade the rover's software to prepare it for its new life on Mars.

When that's done, the rover is set to drive to an open field, release a small helicopter called Ingenuity from its belly, and record video as the drone attempts the first rotocraft flights on Mars. Two cameras on the bottom of Ingenuity will record video, too. Ingenuity is scheduled for up to five test flights over 30 Martian days (31 Earth days). It's just a technology demonstration, but if all goes well, the flights could show we have a a new way to explore other planets.

Once Ingenuity has flown, Perseverance can set off on its two-year mission to explore Jezero Crater. NASA hopes the rover will collect its first rock sample this summer.