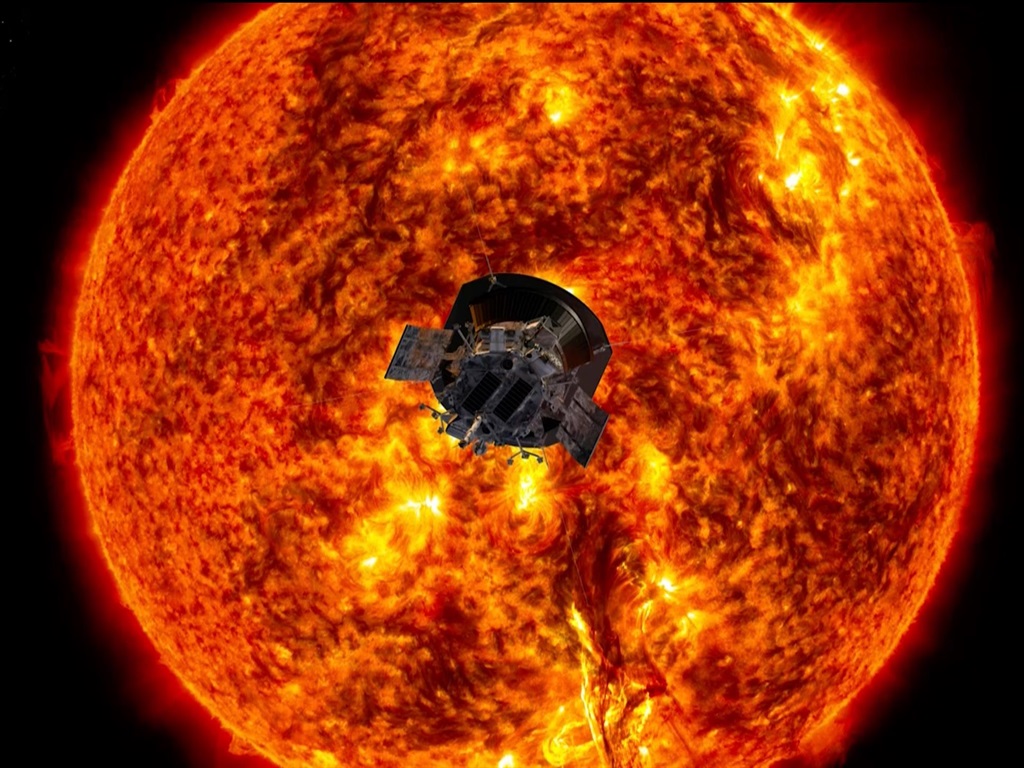 An artist's illustration of the Parker Solar Probe approaching the sun.
NASA

NASA's record-breaking solar probe has discovered new, mysterious phenomena at the edge of the sun.

Since it launched in August 2018, the Parker Solar Probe has rocketed around the sun three times, getting closer than any spacecraft before it and traveling faster than any other human-made object in history.

On Wednesday, NASA scientists announced the probe's biggest discoveries so far, in four papers published in the journal Nature.

The research revealed never-before-seen activity in the plasma and energy at the edges of the sun's atmosphere, including reversals of the sun's magnetic field and "bursts" in its stream of electrically charged particles, called solar wind.

This wind surges into space and washes over Earth, so studying its source could help scientists figure out how to protect astronauts and Earth's electric grid from unpredictable, violent solar explosions.

By sending the Parker probe to the sun, NASA is studying this dangerous wind in more detail than scientists could from Earth.

"Imagine that we live halfway down a waterfall, and the water is always flowing past us. It's very turbulent, chaotic, unstructured, and we want to know what is the source of the waterfall up at the top," Stuart Bale, a physicist who leads the team that investigates the probe's solar wind data, said in a press call. "It's very hard to tell from halfway down." 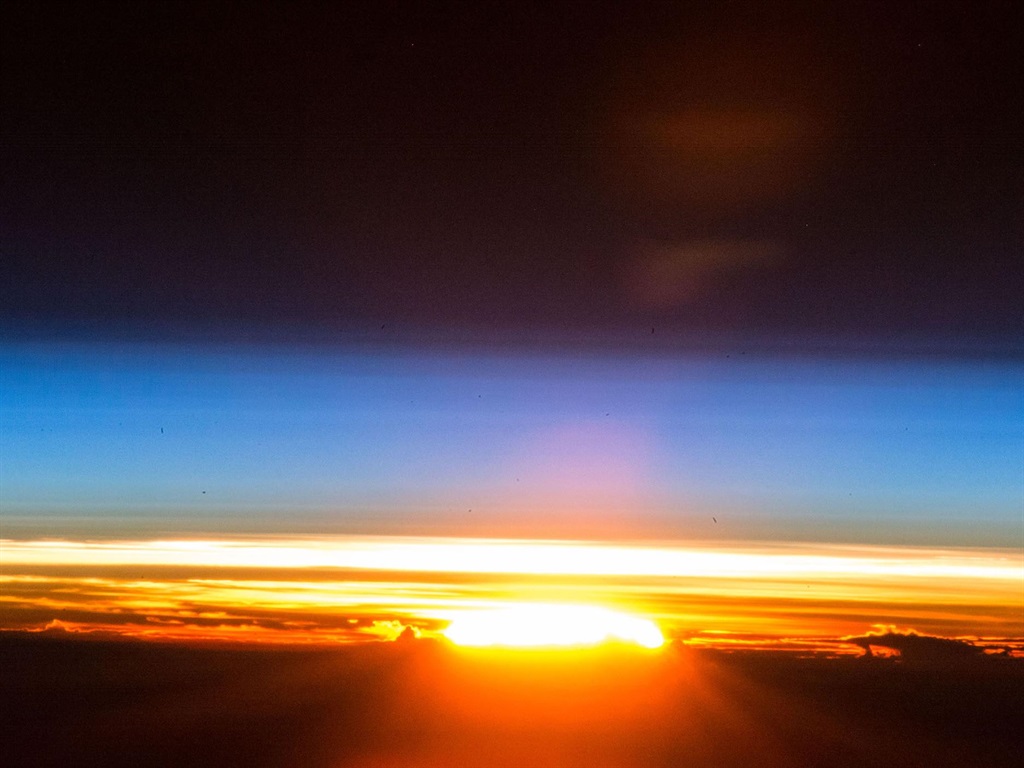 A sunrise is photographed from the International Space Station, December 25, 2017.
NASA

NASA scientists are seeking answers two major questions about the sun: What causes solar wind to accelerate as it shoots out into space? And why is the sun's outer layer, called the corona, up to 500 times hotter than its inner layers?

The new data offers some initial clues. For the first time, Parker identified a clear source of a stream of slow, steady wind flowing out from the sun. It came from a hole in the corona - a spot where the gas is cooler and less dense. The Parker Solar Probe observed a slow solar wind flowing out from the small coronal hole — the long, thin black spot seen on the left side of the sun in this image captured by NASA's Solar Dynamics Observatory — on October 27, 2018.
NASA/SDO

The Parker probe also detected rogue waves of magnetic energy rushing through the solar wind. As those magnetic waves washed over the spacecraft, the Parker probe detected huge spikes in the speed of the solar wind - sometimes it jumped over 300,000 mph in just seconds. Then just as quickly, the rapid winds were gone.

"We see that the solar wind is very bursty," Bale said. "It's bubbly, it's unstable. And this is not how it is near Earth."

The bursts could explain why the corona is so hot.

"We think it tells us, possibly, a path towards understanding how energy is getting from the sun into the atmosphere and heating it," Justin Kasper, another physicist who studied Parker's observations of solar wind, said in the call.

Scientists had never observed these bursts and bubbles before, but they seem to be common. The Parker spacecraft observed about 1,000 of them in just 11 days.

The rogue spikes of energy also delivered an additional surprise: The bursts are so strong that they flip the sun's magnetic field.

During a switchback, a wave of the magnetic field bends back on itself to point almost directly at the sun.
NASA/Goddard/CIL

The scientists call these events "switchbacks" because in the affected area, the sun's magnetic field whips backwards so that it's almost pointing directly at the sun.

The switchbacks only seem to occur close to the sun (within Mercury's orbit), so scientists could never have observed them without the Parker probe.

"These are great clues, and now we can go look at the surface of the sun and figure out what's causing those [bursts] and launching them up into space," Kasper said.

Parker confirmed that there's a dust-free zone around the sun

Scientists have long suspected that the sun is surrounded by an area without nay cosmic dust - the tiny crumbs of planets and asteroids that float through space and fall into stars' orbits. That's because the sun's heat should vaporize any solid dust that gets too close.

For the first time, Parker flew close enough to the sun to provide evidence that such a dust-free zone exists. It observed that the dust does indeed get thinner closer to the sun.

Still, this zone wasn't quite what scientists expected. On clear nights, observers from Earth can see the ring of dust surrounding the sun — known as Zodiacal dust or "false dawn" — as an illuminated cloud above the horizon.
ESO/Y.Beletsky

"What was a bit of a surprise is that the dust decrease is very smooth," Russell Howard, another astrophysicist working with the probe, said in the call. "We don't see any sudden decreases indicating that some material has evaporated."

That will be another mystery to prod as the spacecraft gets closer to the sun. An illustration of NASA's Parker Solar Probe as it flies toward the sun.
NASA/JHU/APL

In energetic particle storms, events on the sun send out floods of the ions and electrons that make up solar wind. These particles travel at almost the speed of light, which makes them nearly impossible to foresee. They can reach Earth in under half an hour and damage spacecraft electronics. This can be especially dangerous to astronauts traveling far from Earth.

In a coronal mass ejection, the sun sends billions of tons of coronal material hurtling into space. Such an explosion could cause mass damage to Earth's power grids and pipelines. The sun blows out a coronal mass ejection, February 24, 2015.
NASA/GSFC

Over the next six years, Parker will make close approaches to the sun 21 more times, getting closer and closer. In its final pass, it will fly within 4 million miles (6 million kilometres) of the sun's surface.

During each fly-by, the probe will gather more data that could answer physicists' questions about the sun's corona and solar wind.

"As we get closer, we'll be right in the sources of the heat, the sources of the acceleration of particles, and of course those amazing eruptions," Nicola Fox, NASA's director of heliophysics, said in the call. "Even with what we have now, we already know that we will need to adjust the model used to understand the sun."