Galaxy Messier 94, imaged by the Hubble Space Telescope, is rapidly forming new stars in the bright ring surrounding it.
NASA

The Hubble Space Telescope is finally emerging from a month-long hibernation, after NASA fixed a mysterious error that forced it offline. The Hubble Space Telescope hovers at the boundary of Earth and space in this picture, taken after Hubble's second servicing mission in 1997.
NASA

The telescope's payload computer suddenly stopped working on June 13. That computer, built in the 1980s, is like Hubble's brain — it controls and monitors all the science instruments on the spacecraft.

But that computer wasn't the source of the problem. NASA still hasn't figured out where the glitch started. But on Friday, NASA announced that the Hubble team had successfully switched the telescope to backup versions of the malfunctioning hardware. The backup payload computer is now in "normal operations mode," the agency said in its update.

"I was quite worried," NASA Associate Administrator Thomas Zurbuchen said after NASA announced its success on Friday. The first servicing mission to the Hubble Space Telescope saw astronauts install a set of specialized lenses to correct the flawed main mirror in the telescope.
NASA

"We all knew this was riskier than we normally do," he added, in a video shared on Twitter.

Even though NASA has probably fixed the issue, it's a sign that Hubble's age may be catching up to it. The telescope hasn't been upgraded since the last astronauts serviced it in 2009. Some of its hardware is more than 30 years old.

"Someday, a component will randomly fail that we won't have a backup for. That's the most likely way the Hubble mission will end," Paul Hertz, director of NASA's astrophysics division, told Insider the week before Hubble switched to the backup hardware.

Hubble is the world's most powerful space telescope. In three decades of observing the cosmos in exquisite detail, it has fundamentally changed our understanding of the universe. The Crab Nebula - a 6-light-year-wide expanding remnant of a star's supernova explosion - as imaged by Hubble.
NASA, ESA, J. Hester and A. Loll (Arizona State University)

"Hubble is one of NASA's most important astrophysics missions. It's been operating for over 31 years, and NASA is hopeful it will last for many more years," a NASA spokesperson told Insider in June. "From a perspective of the value of Hubble to the scientific community, it is still the most powerful telescope available."

The Space Shuttle Discovery carried Hubble into orbit in April 1990, the start of its 30 years of revolutionary astronomy. The Hubble Space Telescope is deployed on April 25, 1990 from the Space Shuttle Discovery.
NASA/Smithsonian Institution/Lockheed Corporation

The observatory has studied planets beyond our solar system, distant galaxies, and the mysterious dark matter that seems to permeate the universe.

Until it went offline, Hubble was continuing to make stunning observations of the cosmos on a monthly basis. Altogether, the telescope has made more than 1 million scientific observations. It could take up to a week to get Hubble back to full science operations, Hertz said.

The result is a portfolio of awe-inspiring images of the most dramatic landscapes in our universe - clouds of incubating stars, massive explosions, and galaxies of all shapes and sizes. The giant red nebula (NGC 2014) and its smaller blue neighbor (NGC 2020) are part of a vast star-forming region in the Large Magellanic Cloud, a satellite galaxy of the Milky Way.
NASA, ESA and STScI

Hubble's camera captures images in grayscale, but NASA adds colour after downloading the imagery — often in order to highlight particular features or chemical elements as the human eye might see them.

Hubble has also zoomed in on the planets of our solar system to capture new features and details on their surfaces. Labels added to this Hubble Space Telescope image of Jupiter point out atmospheric features on the planet, including the Great Red Spot and Red Spot Jr.
NASA/ESA/NOIRLab/NSF/AURA/M.H. Wong and I. de Pater (UC Berkeley) et al.

The space observatory has created portraits of Jupiter, imaged an enormous vortex raging on Neptune, and illustrated the seasons of Saturn.

One of Hubble's most iconic images, from its Deep Field project, offers one of our widest, deepest portraits of the visible universe. A segment of Hubble's Ultra Deep Field image, which contains about 265,000 galaxies that stretch back in time to just 500 million years after the Big Bang.
NASA/ESA/H. Teplitz and M. Rafelski, A. Koekemoer, R. Windhorst, and Z. Levay

The further away a galaxy is, the further its light has to travel to reach us, so the older that light is when we look at it. That's why cosmic distances are measured in light-years.

Hubble can peer so far across the universe that it captures light from galaxies that formed just 500 million years after the Big Bang. That's how old some of the hundreds of thousands of galaxies in the telescope's Deep Field images are.

Hubble has come a long way over the last 31 years, though. This was the first photo it took after launch. This first Hubble image was much clearer than a telescope on the ground, but it pales in comparison to the observatory's later masterpieces.

Shortly after launch, NASA discovered that a flaw in Hubble's primary mirror was marring its images. So in 1993, astronauts launched into space to repair the telescope. 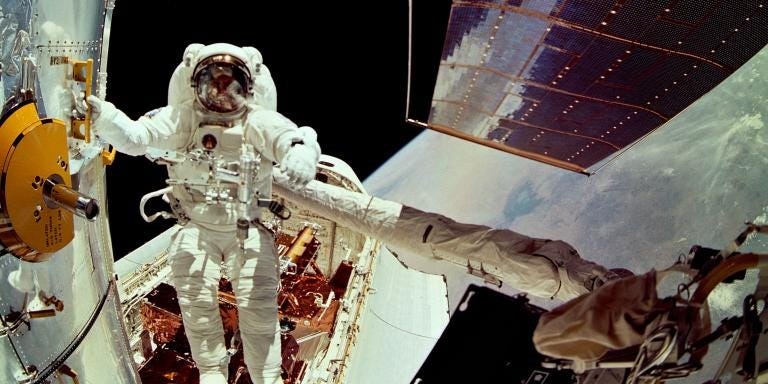 Seven astronauts on the Space Shuttle Endeavour replaced a malfunctioning mirror on the Hubble Space Telescope in December 1993.
NASA

Hubble is the first space telescope designed for in-orbit servicing. All in all, astronauts have launched to the telescope five times for maintenance, upgrades, and repairs.

But since NASA retired the Space Shuttles in 2011, it hasn't had any spaceships that can travel to Hubble.

One star-birthing formation became particularly famous after Hubble photographed it in 1995. These tendrils of gas and dust are called the Pillars of Creation. The pillars are part of the Eagle Nebula, which is about 6,500 light-years away. They shroud a stellar nursery — where new stars are constantly forming from clouds of gas and dust.

The upper right corner of this photo is step-shaped due to the shape of Hubble's camera at the time.

Hubble has turned its lens back to the pillars several times since 1995, capturing them in more colour and detail each time. The pillars stretch about 5 light-years. In this image, the blue colors represent oxygen, red is sulfur, and green is nitrogen and hydrogen.
NASA, ESA and the Hubble Heritage Team (STScI/AURA)

Flows of electrically charged particles from a cluster of young stars located just outside the frame of this image are slowly eroding the pillars.

Hubble has even imaged the pillars in near-infrared light - revealing the newborn stars hidden in the dust. In 1998, astronomers using Hubble discovered that the universe has continued to expand faster and faster since the Big Bang. 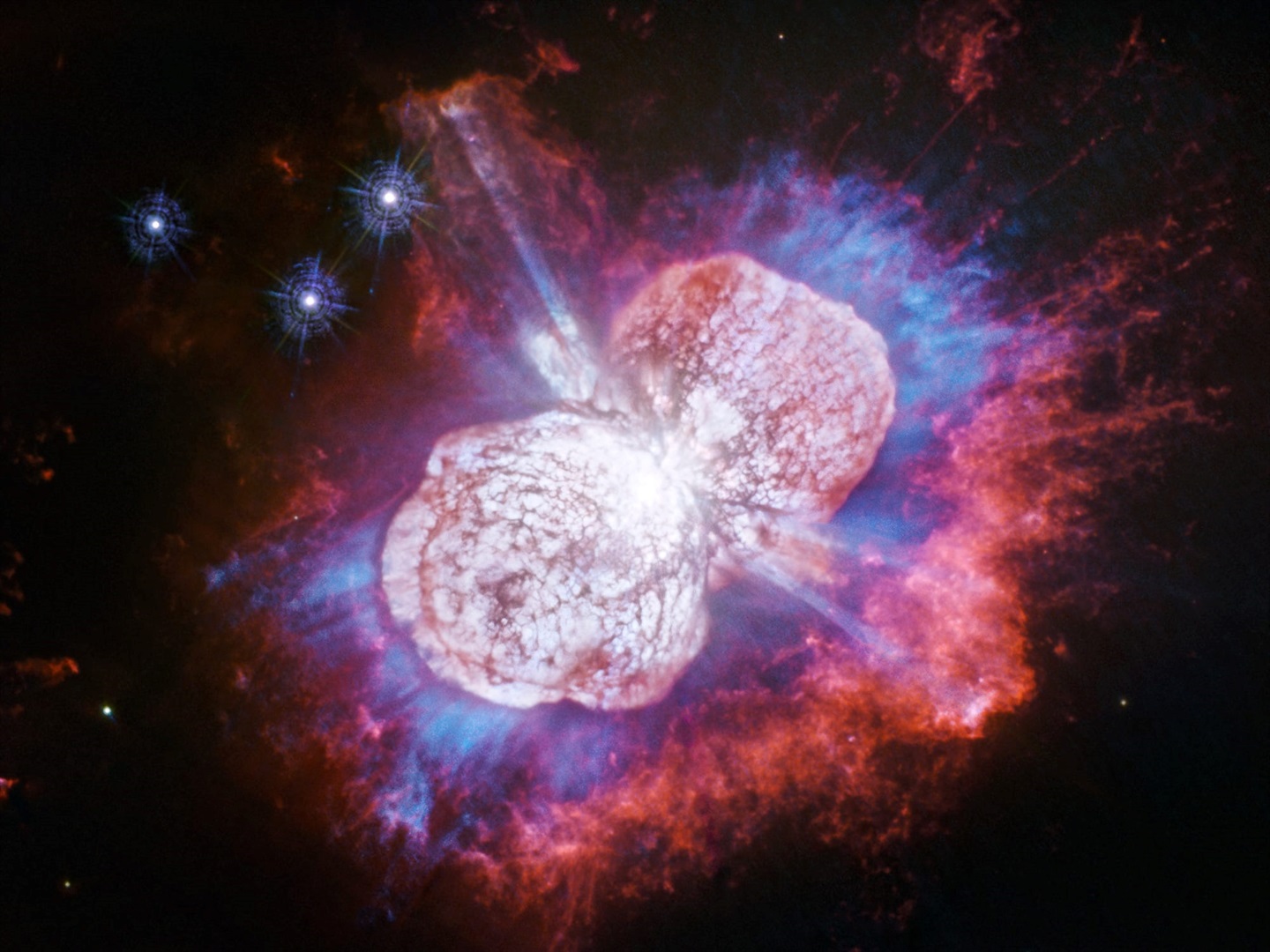 Previously, scientists assumed that the universe expanded rapidly after the Big Bang but slowed down as time wore on. However, by using Hubble to peer at dying stars far away — near the beginning of the universe — astronomers discovered that there isn't enough matter in the universe for gravity to stop it from expanding. Therefore, the universe's expansion will keep speeding up.

The researchers behind the discovery won a Nobel Prize in 2011.

Astronomers then used Hubble's observations to calculate how fast the universe is expanding - a measurement known as the Hubble Constant. Spiral galaxy NGC 4603, imaged by Hubble, helped astronomers calculate the rate of the universe's expansion in 1999.
Jeffrey Newman (Univ. of California at Berkeley) and NASA

That measure (like the telescope) is named after Edwin Hubble, the astronomer who first discovered that galaxies speed away from us at faster rates when they're further away.

Calculating the Hubble Constant helped astronomers determine how old the universe is. Thanks to the telescope, they have a much better idea of the universe's age today —  scientists think it's about 13.8 billion years old. The actual rate of its expansion is still up for debate, though.

"Before Hubble, astronomers could not decide if the universe was 10 billion or 20 billion years old," astronomer Wendy Freedman said in 1999. A small portion of one of the largest known star-birth regions in the galaxy, the Carina Nebula, released April 22, 2010. The image shows the top of a three-light-year-tall pillar of gas and dust.
NASA Goddard Space Flight Center

"The size scale of the universe had a range so vast that it didn't allow astronomers to confront with any certainty many of the most basic questions about the origin and eventual fate of the cosmos," Freedman, an astrophysicist who led the team that measured the Hubble Constant, said in a 1999 press release. "After all these years, we are finally entering an era of precision cosmology. Now we can more reliably address the broader picture of the universe's origin, evolution and destiny." Then just a year later, Hubble spotted a new object in the Kuiper Belt that was larger than Pluto, which threw its status as a planet into question. (Pluto is now considered a dwarf planet.)

Planets circling other stars are too far away and too small for Hubble to photograph. But the telescope has nonetheless made important discoveries about these exoplanets. Hubble has detected organic molecules and carbon dioxide on planets orbiting other stars — the first observations like that ever made. It also captured an exoplanet in visible light for the first time in the mid-2000s.

In 2019, Hubble found evidence of water vapour on an exoplanet — another major first in the search for alien life. Some scientists think that planet could be habitable.

Hubble has also given scientists some of their best data on dark matter. 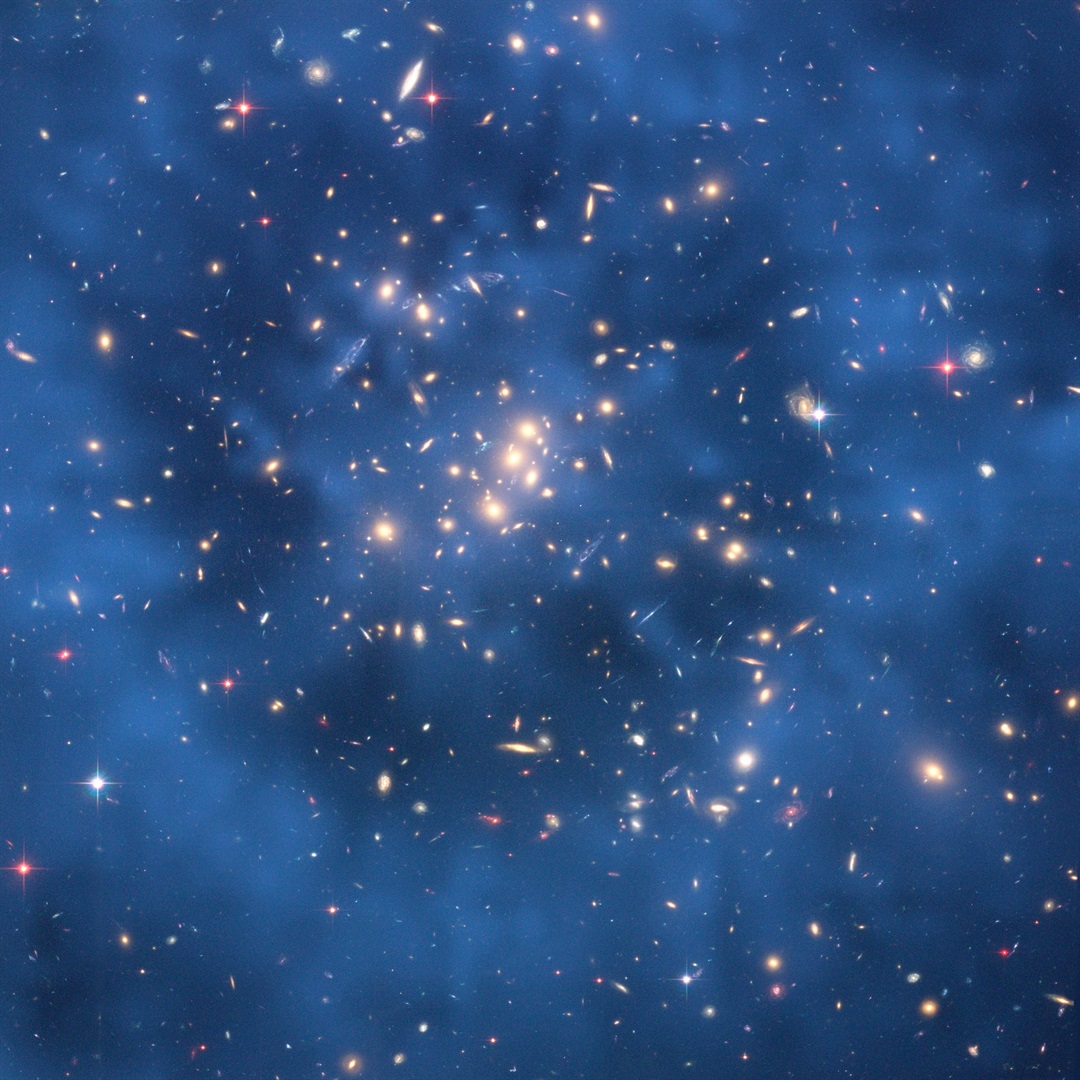 Hubble allowed astronomers to map the distribution of dark matter throughout the universe.

In recent years, one team of scientists has used Hubble to study a galaxy that doesn't appear to contain any dark matter at all. Since dark matter was previously thought to be like glue holding the universe together, this galaxy could throw everything into question. The comet, known as 2I/Borisov, came from another star system and hurtled past the sun. It didn't get closer to Earth than 300 million kilometres, but Hubble spotted it anyway.

Hubble could still have years of science ahead of it. NASA hopes to keep the telescope alive well into the 2020s. The Hubble Space Telescope in orbit above Earth.
NASA

"This is an older machine, and it's kind of telling us: Look, I'm getting a little bit old here, right? It's talking to us," Zurbuchen said. "Despite that, more science is ahead, and we're excited about it."