The Hubble Space Telescope has captured a distant tangle of three galaxies crashing into each other and slowly merging.

The image reveals a cosmic collision 681 million light-years away, in the constellation of Cancer. This trio of melding galaxies is called IC 2431. Astronomers focussed Hubble on the triple-galaxy merger after volunteers identified it as part of a citizen-science project called Galaxy Zoo, in which 100,000 volunteers conducted the largest galaxy census ever. NASA released the new Hubble image this month.

Galaxies are mostly empty spaces, so they can meet and pass through one another with very few star collisions. However, all the new material moving from one galaxy through another compresses clouds of gas, which collapse into new stars. The resulting flurry of a new star formation is called a starburst. The nearby Tarantula Nebula is a starburst, or a region where new stars are constantly forming.NASA/JPL-Caltech/Cornell University and University

That process can take billions of years. Our Milky Way is on its collision course with the neighbouring Andromeda galaxy in about 4 billion years, but the sun will expand and fry Earth long before that happens. An illustration shows the Andromeda galaxy interacting with the Milky Way, as it would appear from Earth about 3.75 billion years from now. NASA, ESA, Z. Levay and R. van der Marel (STScI),

When supermassive black holes collide, they produce ripples in space-time called gravitational waves. Researchers have detected such waves from a few black hole collisions, but not from the black holes at the centre of galaxy mergers.

Scientists have theorised that the constant low-level hum of gravitational waves permeates the universe, from all the galaxies merging at any given time. Researchers are still working to build gravitational-wave detectors sensitive enough to detect this background noise. 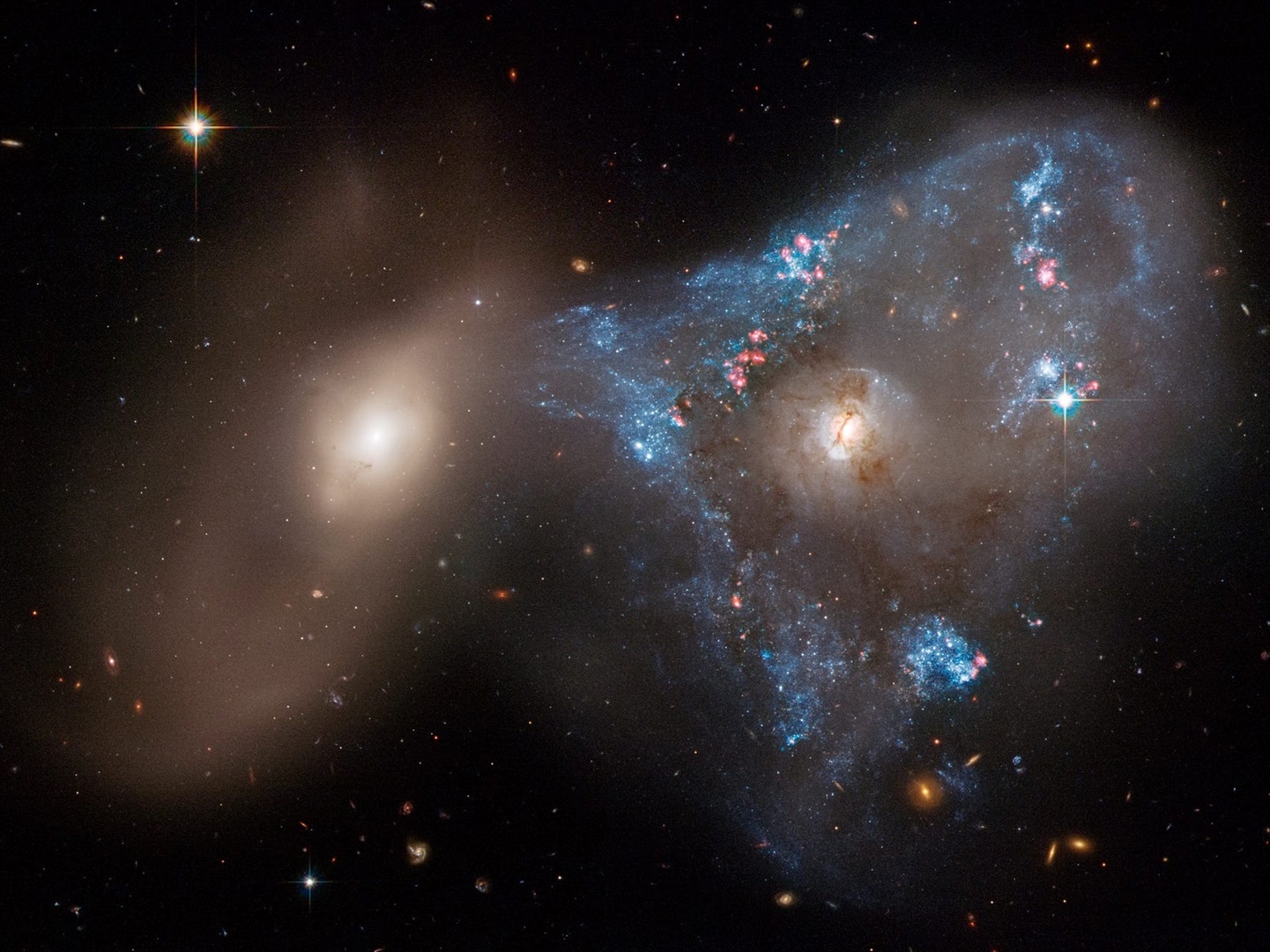 Two galaxies colliding, as photographed by the Hubble Space Telescope.

For now, astronomers can observe galaxies merging from afar using space telescopes. Hubble, which launched into Earth's orbit in 1990, is the most powerful telescope to ever operate in space. It has photographed the births and deaths of stars, spotted new moons circling Pluto, and tracked two interstellar objects zipping through our solar system. Its observations have allowed astronomers to calculate the age and expansion of the universe and to peer at galaxies formed shortly after the Big Bang. The Hubble Space Telescope hovers at the boundary of Earth and space in this picture, taken after Hubble's second servicing mission in 1997. NASA

In December, NASA rocketed a new observatory into deep space, the James Webb Space Telescope, that's poised to cast a view across the universe 100 times more powerful than Hubble's.

Because it uses infrared light, Webb will be able to see past clouds of dust that can obscure galactic centres and star-forming regions from Hubble's view. That will allow astronomers to track the speeding up and slowing down of starbursts in different galaxies. 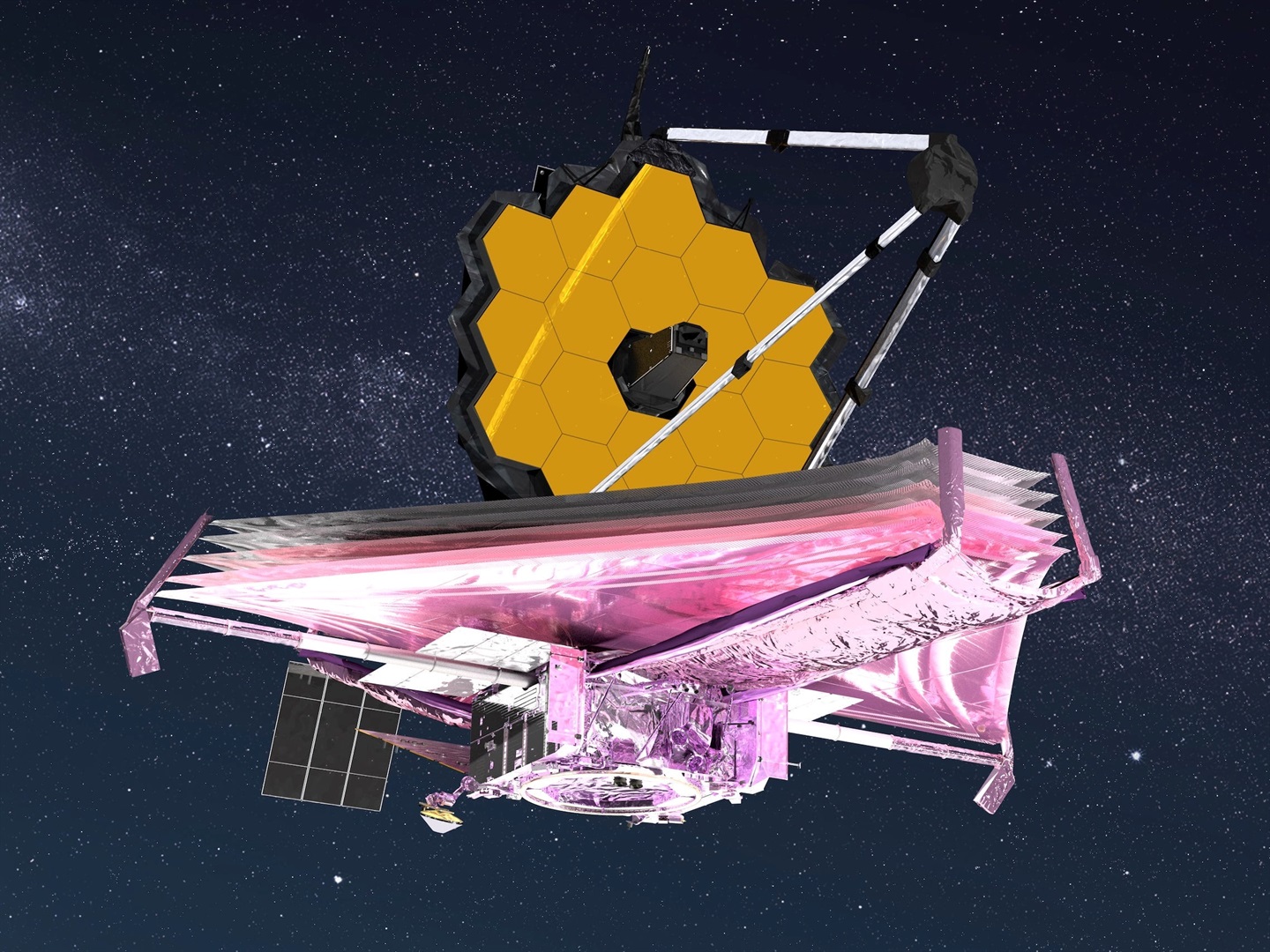 An artist's conception of the James Webb Space Telescope.

Webb's powerful gaze will also allow astronomers to study black holes that have the mass of millions, maybe billions, of suns. If it succeeds, Webb will peer so far into the universe that it sees the earliest galaxies ever formed, as well as some of the first black holes. That will help scientists figure out how supermassive black holes became so massive.

The new observatory will even cast its infrared gaze upon the supermassive black hole at the centre of our galaxy, to help scientists understand why it goes through cycles of flaring up and calming down.

Webb completed the risky tasks of travelling to its orbit a million miles away and unfolding itself in space. Now it's cooling down and calibrating its instruments. The new telescope is set to begin its observations this year