The first-ever space helicopter is en route to Mars, to shoot drone footage NASA's new Mars rover, which launched on 30 July, has a miniature helicopter tucked inside its belly.

Perseverance will be NASA's fifth rover to Mars, but its helicopter stowaway, called Ingenuity, will be the first spacecraft of its kind. About two months after the rover lands, it's programmed to lower the helicopter to the Martian surface, back away, and watch as the tiny drone carries out a series of test flights.

If successful, these will be the first controlled flights ever conducted on another planet.

Ingenuity is just a technological demonstration, but it could kick off a new approach to exploring other planets.

"In the future, it could transform how we do planetary science on these other worlds, and eventually be a scout so that we can figure out where exactly do we need to send our robots," NASA Administrator Jim Bridenstine said in a press briefing before the launch.

Here's how the Ingenuity helicopter works.

The first drone footage from Mars An artist's concept of the Ingenuity helicopter on the Martian surface.
NASA/JPL-Caltech

Even for a 1.8 kilogram machine like Ingenuity, the thin Martian atmosphere makes flying difficult. The air has just 1% of the density of Earth's atmosphere.

"The first and foremost challenge is to make a vehicle that's light enough to be lifted," MiMi Aung, who leads the helicopter project at NASA's Jet Propulsion Laboratory, explained in a video about the spacecraft. "The second is to generate lift."

To catch enough air, the helicopter's four carbon-fiber blades have to spin in opposite directions at about 2,400 revolutions per minute - about eight times as fast as a passenger helicopter on Earth. To power all that spinning, solar panels on top of the spacecraft will soak up the sun's energy. "It's a balance of a very light system, yet having enough energy that's needed to spin the rotors so fast to lift, and on top of it having to design in the autonomy," Aung said.

Because communicating with spacecraft on Mars takes a few minutes, ground controllers on Earth can't direct Ingenuity's flight in real time. So engineers have already designed and programmed five flights for the helicopter to carry out autonomously in spring 2021.

The first flight will just test that the helicopter can get off the ground and hover 3 meters in the air. From there, each test will be more difficult than the last, culminating in a final flight that could carry the helicopter over 50 meters of Martian ground. Two cameras on the underside of the drone will capture footage of the Martian surface below - one in color, and one in black and white. Perseverance will look on with its own cameras, allowing the helicopter and the rover to record each other.

"Imagine looking from Perseverance out at a helicopter that is flying around Perseverance, and the helicopter is looking back at Perseverance getting us images of what Perseverance is doing," Bridenstine said. "We're going to be able to see with our own eyes, with motion pictures, these kind of activities happening on another world. And I just can't tell you how excited I am." 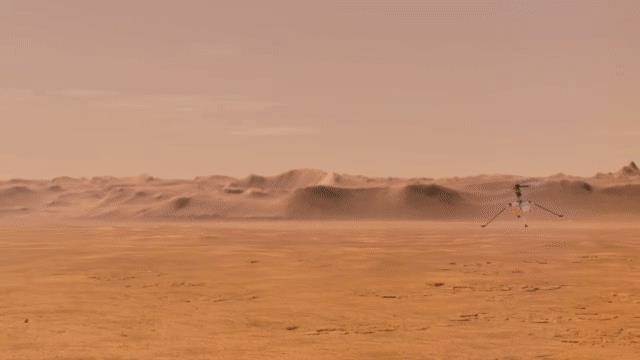 NASA already has plans to send at least one helicopter to another world beyond Mars: A mission planned for 2026 would send a nuclear-powered rotocraft to search for alien life on Saturn's largest moon, Titan.

"What's really most important is everything we're learning here is for the future rotocraft systems that we want to introduce into space exploration," Aung said.

Getting the helicopter to Mars requires a 'magic trick'

NASA's Associate Administrator, Thomas Zurbuchen, proposed the helicopter late in the rover's design. But the team behind the machine was excited about the idea.

"I told Thomas, whatever you can do to make that happen, I'm all for it," Bridenstine said. An engineer observes a test of the Mars Helicopter Delivery System at Lockheed Martin Space in Denver, Colorado, on April 2019.

By that time, the top of Perseverance was already full of instruments and equipment. There was very little room to squeeze in a whole new machine.

"Kind of late in the game, we were asked to accommodate this little thing called the Mars helicopter," Matt Wallace, the Perseverance deputy project manager at NASA's Jet Propulsion Laboratory, said in the briefing. "We had to do a little bit of a magic trick to get that one on the rover. We pulled a bit of a rabbit out of the hat."

Since the underside of the rover had a stretch of free panel, engineers tucked the light, compact helicopter inside.

Lockheed Martin, one of NASA's contractors, built the system that will lower Ingenuity to the Martian ground. Around two months after it lands, Perseverance will drop the shield that covers the helicopter. The rover will then drive to whichever flat, debris-free field the missions managers have selected for flying Ingenuity.

After six days of checking out all the robot's systems, mission managers will send the signal to release the helicopter. A small electric motor, a spring-loaded arm, and a pyrotechnic device will slowly twist Ingenuity away from the rover into an upright position, then drop the drone 5 inches to the ground.

The 48-cm-tall helicopter will have about 66 cm of clearance below the rover's belly.

For now, this complex delivery system lies in wait as it travels 505 million kilometres to its destination.

Related Links
SpaceX flew a gigantic Starship rocket prototype for 40 seconds, reaching 150 metres high
China just launched an ambitious Mars mission that could make it the third nation there
Three missions to Mars launch this month, from NASA, China, and the UAE – here’s what they’ll do
Next on Business Insider
CEO who went viral for crying about axing employees says 'a lot of good' has come from his LinkedIn post