NASA's Curiosity Mars rover captured clouds just after sunset on March 19, 2021. The image is colour corrected so that the scene appears as it would to the human eye.

Mars is not a colourful place. For kilometres, the dusty landscape - land and sky - offers only a muted reddish-brown. But that changed earlier this year when a batch of rare iridescent clouds rolled over NASA's Curiosity rover.

The robot beamed several photos of the pearly Mars clouds back to Earth in March, and NASA published them last week. The images show shimmering wisps drifting across grey Martian skies and scattering light from the setting sun.

"I always marvel at the colours that show up: reds and greens and blues and purples," Mark Lemmon, an atmospheric scientist at the Space Science Institute in Boulder, Colorado, said in a NASA press release. "It's really cool to see something shining with lots of colour on Mars."

Clouds are a rare occurrence on Mars, since there isn't much water in the planet's atmosphere, and the air there has just 1% the density of Earth's atmosphere. So clouds mostly appear just around the Martian equator during the coldest part of its year, when the planet's orbit takes it furthest from the sun. The next time it will reach that furthest point, called aphelion, will be in July.

Curiosity is exploring a 146-kilometre-wide crater near the equator, so it gets to see some clouds as Mars approaches aphelion. But one Martian year ago (two Earth years ago), such clouds arrived months earlier than scientists expected.

So this year, they were better prepared. When the early clouds returned in late January, Curiosity was ready to photograph them. The clouds continued to drift over the rover through March. Using the navigation cameras on its mast, NASA’s Curiosity Mars rover took these images of clouds just after sunset on March 28, 2021.
NASA/JPL-Caltech

Scientists now think these clouds are made of frozen carbon dioxide - dry ice, rather than water ice. That conclusion came after researchers analysed Curiosity's images to see how the setting sun's light reflected off the ice crystals inside the clouds - which gives a hint at how high in the sky the clouds were. The researchers determined that these early-arrival clouds were drifting at higher altitudes than normal Martian clouds. It's much colder at high altitudes, and water ice is unlikely there. 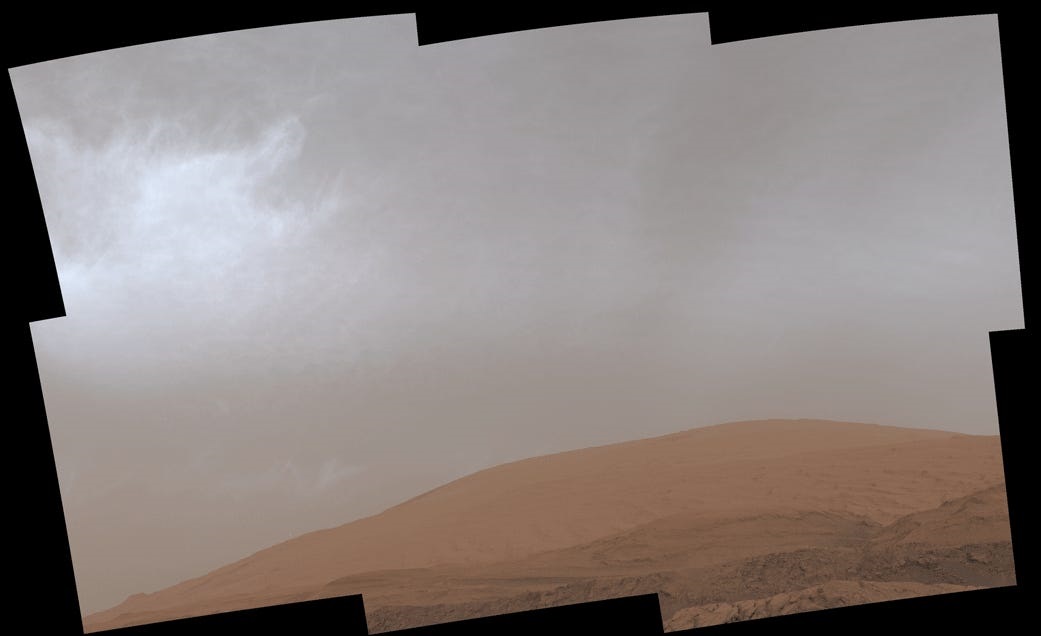 Clouds drift over Mount Sharp on Mars, as seen by NASA's Curiosity rover on March 19, 2021.
NASA/JPL-Caltech/MSSS

"If you see a cloud with a shimmery pastel set of colours in it, that's because the cloud particles are all nearly identical in size," Lemmon said. "That's usually happening just after the clouds have formed and have all grown at the same rate."

Curiosity is climbing a mountain

When it's not turning an eye to the skies, Curiosity is studying the Martian ground.

The rover landed in the planet's Gale Crater in 2012. In its first two years there, Curiosity confirmed that Gale Crater was once a lake filled with the chemical ingredients for life. The Curiosity rover took this self portrait on May 11, 2016.
NASA/JPL-Caltech/MSSS

Then NASA gave the rover a new assignment: Now it's slowly climbing the 5-kilometre-high mountain at the crater's centre, called Mount Sharp.

Each era of Mars' history left marks on the mountain - there are layers of sediment from the flow of an ancient river, clay that once settled at the bottom of the lake, and dust and sand that blew across a dry valley. As the rover climbs, it's getting a chronological tour of Martian history.

In those rock layers, the rover recently discovered signs that Mars' ancient lakes dried up then returned again before disappearing completely. Curiosity has also sniffed out mysterious spikes in the Martian atmosphere's methane levels, measured the red planet's gravitational fields, and unearthed evidence that small, salty ponds were left behind as Mars dried up.