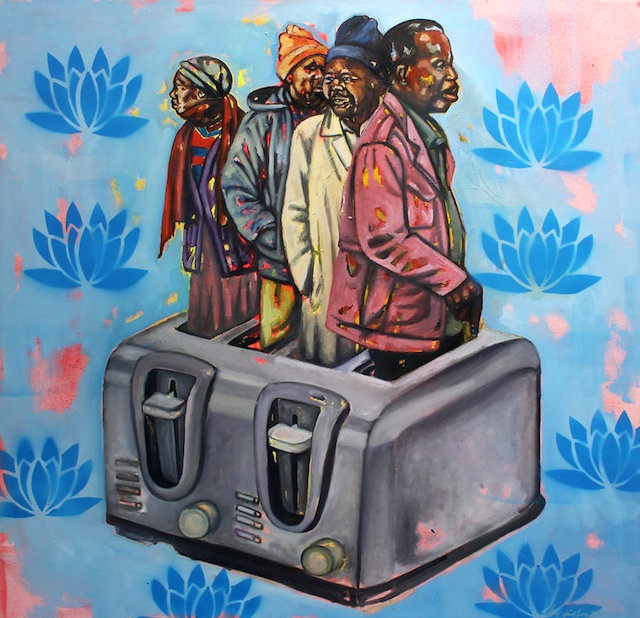 "A half a loaf is better than none", the 2017 work by Khaya Sineyile, via Africanah.org.

Nando's has apologised and removed a painting from a brand new branch it opened in Birmingham in the United Kingdom this week, after patrons branded it as racist.

The new Perry Barr outlet opened at the One Stop Retail Park in England's second-largest city on Wednesday, joining a handful of Nando's restaurants already scattered through the city. Like those, and Nando's throughout the world, the new outlet is decorated with a number of South African art works as part of a company collection that now runs to 21,300 artworks.

But one painting, of four black people in a toaster, did not go down well with patrons at all.

"As a black man, I think this is completely unacceptable, weird, and deeply offensive," one customer complained. "Many of my friends are white, and they've said they are shocked by its depiction of what I can only assume is advocated racism."

See also: Simply Asia had to change a radio ad featuring its Thai chef because South Africans thought it was racist

Others deemed the painting offensive and racist, questioned whether it was "apartheid art" or what the "hidden message" behind it was.

The painting is a 2017 work titled "A half a loaf is better than none" by established artist Khaya Sineyile from Nyanga outside Cape Town.

Sineyile "is an artist seeking to alter the manner in which their works are received", author Themba Tsoti wrote in 2017.

"His work is barren of that apologetic sentiment, where the social context of the township is perpetuated to be the quintessential context for cultural, historic and contemporary passivity in relation to the powers that be."

"A half a loaf is better than none" was described on exhibition as making a "statement about contemporary history being embodied, institutional in the urban context and characterised by a passivity that is communal and itself historic".

Nando's said the painting "takes issue with the far reaching effects of social inequality in South Africa", but apologised and removed the painting from the store.

"We understand art is subjective and without context the work could be misinterpreted, we have apologised for any offence this artwork might have caused," the chain said.

Related Links
Nando's is refusing to give the UK Conservative party a discount card to help recruit members...
'Yoh, that’s awkward': Nando’s makes fun of Pick n Pay’s chicken advert
Banksy got kicked out of the world's biggest art event after crashing it to display his latest...
Next on Business Insider
North Korea's Covid crisis spiraling out of control - 1.4 million people now suffering from 'fever'