Sunsets in the NamibRand are spectacular, and usually washed down with G&Ts. Source: Andrew Thompson.

International travel might currently feel like one of life’s forgotten luxuries, but you wouldn’t know it at Windhoek’s teeming Hosea Kutako International Airport early on a Monday morning.

A packed EuroWings plane, delayed by two hours, has flown in directly from Frankfurt. The delay means its arrival clashes with that of a smaller, but also full, Airlink flight from Cape Town.

By 17:00 that evening, a further eight international flights would land at the same airport, delivering passengers from Cape Town, Johannesburg, and around the world.

Apart from the mandatory wearing of face masks, a semblance of social distancing, the need to present with a negative Covid-19 PCR test no more than 72 hours old (or a full week old, if you're willing to quarantine at your hotel for seven days), and two futuristic full body temperature scanners, the arrivals terminal resembles something you might otherwise expect to find on a typical weekday.

Although numbers are a far cry from those pre-Covid, there’s a distinct sense in the Namibian capital that the country is doing its best to resuscitate itself after its worst year for tourism on record.

The dramatic drop in arriving tourists has gutted large parts of the industry, and is nothing to celebrate, but it also means that there’s never been a more opportune time to visit. Luxury lodges are slashing rates, and destinations like Sossusvlei, usually teeming with travellers, are devoid of their usual crush of Instagrammers and dune scramblers.

Getting to true isolation

Few countries on earth can deliver isolation as quickly, conveniently, and beautifully as Namibia.

From Hosea Kutako International Airport, tourists can depart for any number of iconic destinations - famous mostly for their serene, stark landscapes, spectacular coastlines, populous wildlife, and limited human interactions. But there are few that better serve as a rapid introduction to the country as the vast NamibRand Nature Reserve.

This private conservation initiative has seen farmland turned into a celebrated natural attraction. Vast sandy plains, populated with oryx, springbok, mountain zebra, and several elusive predators like leopard, jackal, and brown hyena, are fringed by rugged mountains and red dunes. In the summer months the big skies are dotted with cotton candy clouds which drift slowly by overhead; by sunset they cycle through various shades of magenta before making way for an astronomical extravaganza.

To reach Kwessi Dunes, one of the newest lodges in the reserve, you can choose a roughly six-hour long scenic drive almost due south of Windhoek. But by far the fastest and most exhilarating option is a one-hour flight over the desert from Windhoek’s Eros Airport aboard a tiny Cessna that sounds - and at times feels - more like a vintage lawn mower with wings than an accomplished plane.

Scenic Air Chief Pilot Wesley Thompson met me and my fellow passengers at the airport doors, and walked us through to the small plane on the runway. After some careful contorting into the back of the small craft, and a brief warning about a slightly bumpy ride ahead courtesy of the warm air rising off the desert floor, we took off over Windhoek. Before long, we were buzzing - and bouncing - high above rolling hills, which turned to iconic red sand dunes. The views from aboard the flight between Windhoek and the NamibRand. Source: Andrew Thompson

The flight delivered on its promises of both turbulence and scenery. As we came in to land, I spotted a lone oryx cowering under the shade of a solitary tree, and a small heard of zebra, and as much as I wanted the aerial extravaganza to continue, sixty minutes of bobbing around in the warm desert air was just about the perfect amount of time for my tolerance.

Not a person or building in sight. Arriving by plane to the middle of the desert is a remarkable experience. Source: Andrew Thompson

From the air, the only sign of civilisation in the vast, flat surroundings was a glistening Toyota Land Cruiser, driven by Natural Selection’s Gert Tsaobeb. Tsaobeb, who introduced himself as Papa G, would be my personal guide for the week.

I boarded the vehicle and we bumbled along the scenic roads to Kwessi Dunes. If it’s a dose of post-pandemic isolation you’re after, there few better places to choose than the brand new 12 room lodge that was ironically open for just one week before Covid-19 lockdowns forced it to close back up.

“From this vantage point,” NamibRand warden Murray Tindall told us during a visit to the lodge, “you can see between 10 and 15 thousand hectares of land - and there’s not another person or building in sight.” From the decks of each tent, guests can see up to 15 thousand hectares across the flat land. Source: Andrew Thompson

There are, of course, several strategically located lodges throughout the reserve, but from the communal areas - and private decks - of Kwessi Dunes you wouldn't know it.

During the day you’re more likely to spot a herd of skittish oryx, or the odd ostrich or springbok, moving across the landscape in the far distance, growing ever bigger as they approach the small watering hole in front of the lodge, than you are a vehicle or any other sign of human life.

The same is true as dusk falls. The NamibRand is a designated Dark Sky reserve, the only of its kind in Africa. This means it has “exceptional or distinguished quality of starry nights and nocturnal environment that is specifically protected for its scientific, natural, educational, cultural, heritage and/or public enjoyment.”

To retain this status, lodges in the NamibRand commit to a comprehensive lighting management agreement and annual light emission audits. Indoor lighting must be below a specified wattage and positioned so as not to affect the outside environment. In its strictest iteration, which Kwessi Dunes observes, game drive vehicles must return from sundowners without headlights - a blind navigational skill which the team of guides at the lodge has miraculously mastered.

To fully appreciate the dark night skies in true luxury, Kwessi Dunes have built star-gazing beds in a luxury tent. Tempting as it might be to relish in the sheer isolation of the reserve, the NamibRand is perfectly positioned for exploration of many of Namibia’s famous natural attractions.

At sunrise the next day we embarked on a thrilling hot air balloon ride led by Namib Sky Balloon Safaris - and there are few places in the world with better flying conditions and scenery than this corner of Namibia.

As the sun rose over the Nubib Mountains, pilot Dennis Hesemans floated our basket of 16 wide-eyed passengers high above the plains, where we saw herds of unassuming oryx, the setting full moon, and the famous and unexplained "fairy circles". 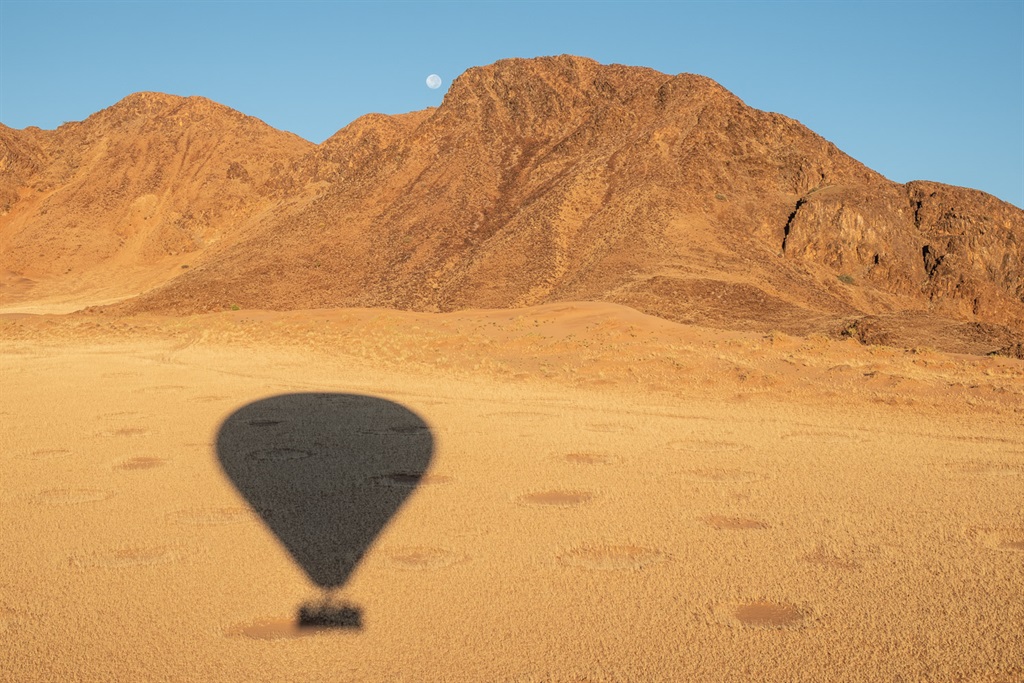 We also saw several almost cliched sand dunes, before he expertly navigated the balloon metres from a jagged cliff face, and down the other side to set her down on a the desert sand - a short drive from an awaiting open air champagne breakfast. There are few more ideal places to fly a balloon than Namibia. Source: Andrew Thompson.

Afternoons and evenings are best spent exploring the surrounds of Kwessi Dunes - either astride a quad bike, or aboard an open Land Cruiser that delivers you to the ultimate sundowner location.

Sunsets in the NamibRand are spectacular, and usually washed down with G&Ts. Source: Andrew Thompson.

If it’s a more sedate afternoon you’re after, then this desert oasis isn’t short of options, either - including an idyllic pool overlooking the waterhole. On my final full day, Papa G drove me through to Sossusvlei - famous for its towering red dunes and forest of painfully photogenic dead trees set before them.

We placed the day's first footsteps on a pristine dune, before spilling down the soft sand into Deadvlei - an otherworldly location usually overridden by Instagrammers striking awkward poses before cameras. But due to Covid, this famous attraction is now almost devoid of tourists. 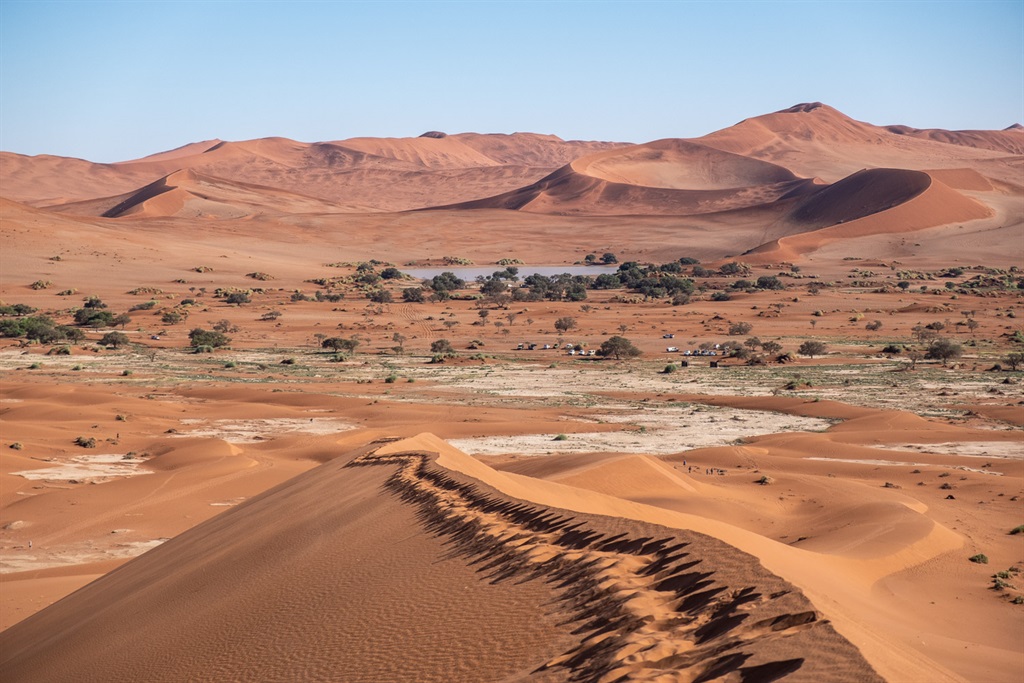 Drought-breaking rains in Sossusvlei have turned parts of the desert into bizarre oases. Source: Andrew Thompson.

“Usually, this would all be full of people,” Papa G said, motioning with a hand across the almost abandoned Deadvlei. “You’re incredibly lucky to experience it like this.” Namibia's Deadvlei is usually teeming with tourists - but on the day we visited there were less than a dozen exploring the surroundings. Source: Andrew Thompson.

My final evening in the desert arrived faster than I’d have liked. In spite of some lingering drought-breaking raindrops, and a full moon doing its best to temporarily pause the reserve’s Dark Sky status, I opted to sleep beneath the stars for a night of unrivalled tranquility, before returning to the reality of return face masks, return PCR tests, and uncomfortably crowded departures halls.

Hotels, like Windhoek's Am Weinberg, where I stayed while awaiting a negative Covid-19 test required to reenter South Africa, are already preparing for a slow increase in Covid-conscious travellers. On the day of my departure, Am Weinberg had released a new option to book a Covid test in the comfort of their ample hotel rooms, rather than visit one of the city's pathology labs or drive-through centres.

And although travelling internationally in the midst of a pandemic is a privilege, and slightly more complex than before, four days of living in the parallel world of the Namibian desert, far from crowds and newspaper headlines and Covid-19 case counts, was the ultimate way to recharge.

Given how accessible it is, both to Europe and South Africa, and yet still devoid of tourist crushes and offering better rates than ever, means a return trip is an equally viable and attractive option. 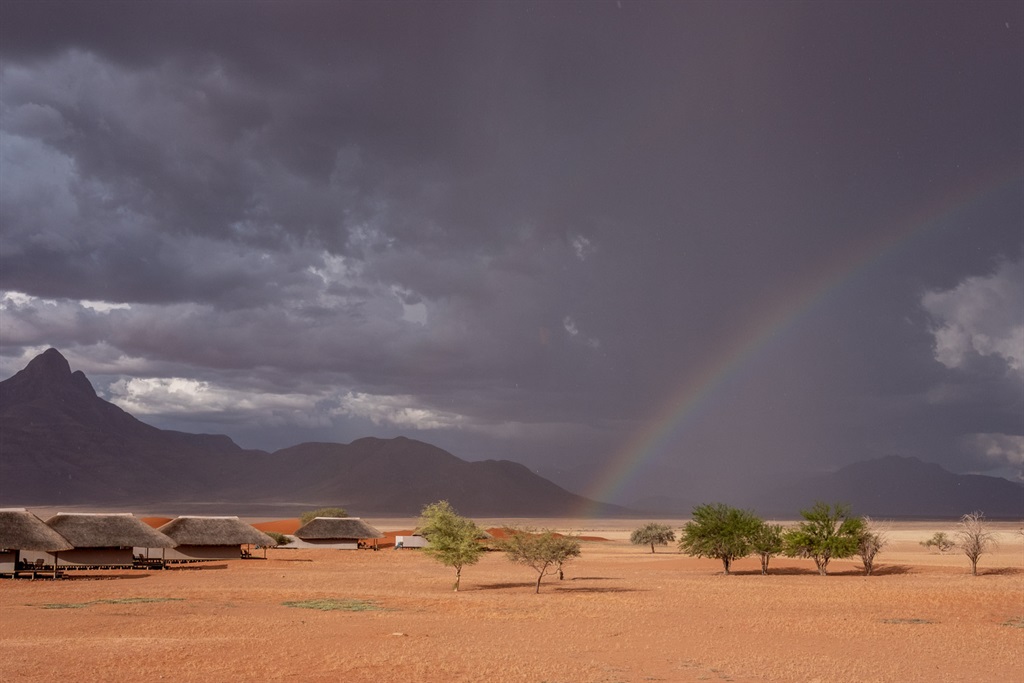 Business Insider was a guest of Natural Selection, which operates various camps throughout Southern Africa.

Related Links
African airlines are testing their own Covid-19 passport
Covid-19: KLM cuts SA flights as the Netherlands imposes one of the strictest travel requirements...
How the Covid-19 vaccine and digital health passports could shape the future of travel
Next on Business Insider
United Airlines is fighting hard for flights between Washington DC and Cape Town