New Delhi - April 26: A healthcare worker in PPE attends to a patient in an isolation ward - a banquet hall temporarily converted for coronavirus patients.
Naveen Sharma/SOPA Images/LightRocket via Getty Images

My heart ran cold as the doctor sent us a message on WhatsApp about my father's deteriorating condition. "He has an inflammation in his lungs - given his age and medical history - you should be prepared to hospitalise him."

My father has Parkinson's, a heart condition, weak lungs and high blood pressure. I kept thinking: "Where am I going to get a bed? Or oxygen?"

On April 15, my 75-year-old parents, 15-year-old-son, and I tested positive for coronavirus. We were shocked. We were extremely cautious when it came to protecting ourselves from Covid-19, however, it did not seem enough in the face of the rising infection rate in India.

But as a doctor friend later would tell me: "The way things are right now, you could test a random person on the street and he or she would possibly test positive."

If India escaped Covid-19 relatively lightly last year, we are living a nightmare in this second wave.

On Tuesday, India announced it recorded 323,144 new cases, and 2,771 deaths in the previous 24 hours. On Monday, for the fifth straight day, the country set a new global record for daily cases in the pandemic.

In Noida, the satellite town of the capital New Delhi where we live, there is also a huge shortage of beds and oxygen. Hospitals have been sending out urgent appeals for oxygen.

One even had to go to the Delhi High Court to plead for more, saying they had just three hours of it left for 400 patients, 262 of whom had Covid-19. The court's ruling ordered the government to "beg, borrow or steal" to get what hospitals need.

My social media feed has been one long ream of urgent pleas from friends, acquaintances, and complete strangers. Someone's friend, someone's sister, someone's father or mother or grandparent need help. 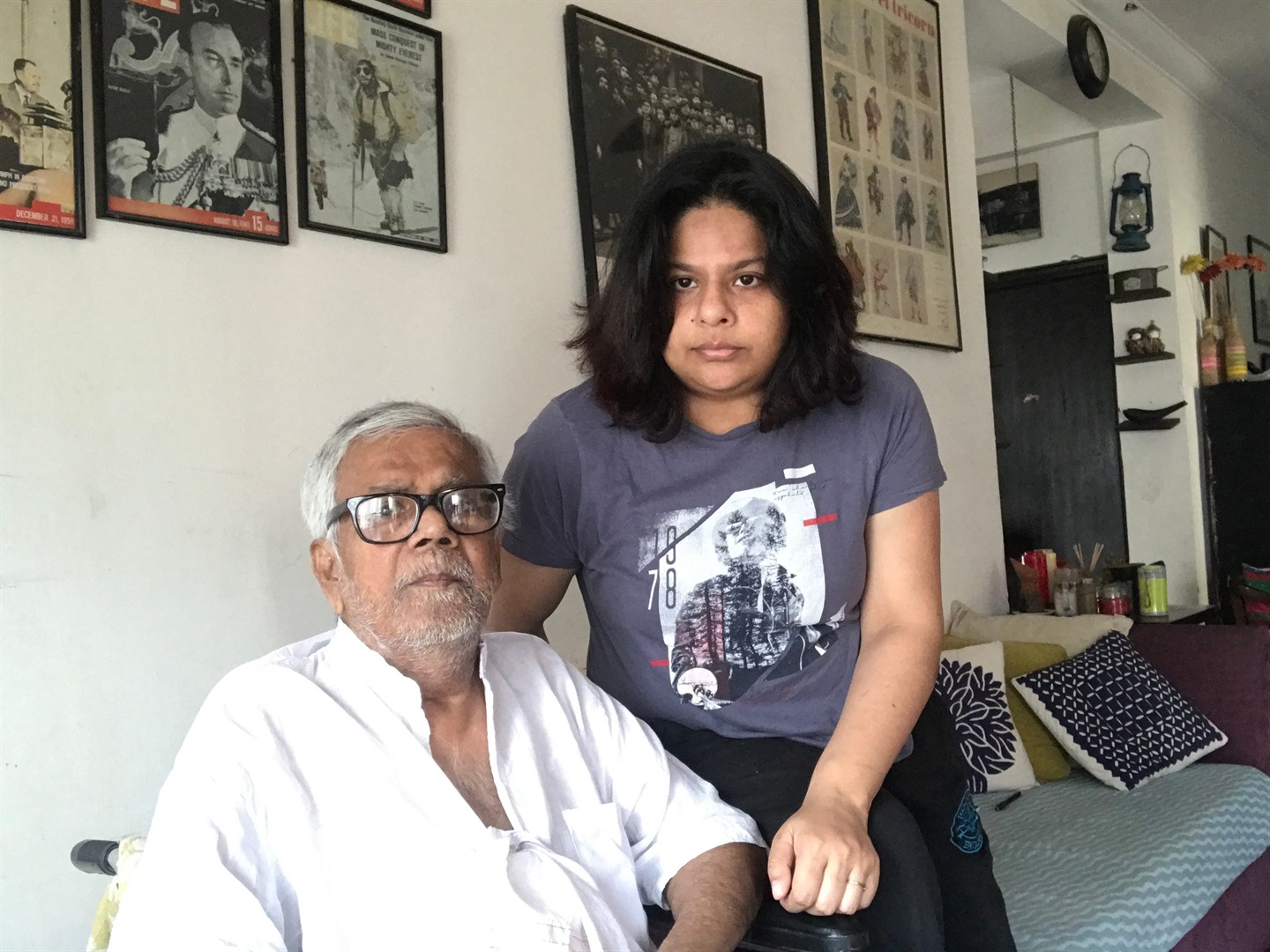 For the first two days after our positive tests, we anxiously monitored my father. At first, he had no obvious symptoms. But then his oxygen levels were dropping consistently.

My heart was in turmoil. I thought that, if his condition continued to deteriorate, I would not be able to wheel him into a hospital to get him the required care.

On the evening of April 17, I messaged our family doctor with our blood reports and told her that my father's saturation levels were fluctuating below 94. She gave a list of hospitals I should call to get him admitted. And then she was gone. Doctors are severely overworked, too.

After half a day of calling, I was at my wit's end. No one had a bed available.

The next two days went by in a frenzy of friends trying to help with leads. As I chased hospitals, an acquaintance suggested I get in touch with her friend, a lung doctor. She suggested I immediately get a scan done to see what condition his lungs were in.

I'd tested positive but no one was coming to help my father. No one from the authorities has called to check on us, nor has any health worker visited. I was desperate and so I decided to head out, in my COVID positive state, to get him the care he needed.

On April 20, still weak from my own infection, I somehow hauled him onto his wheelchair and took him to a nearby Covid-19 hospital.

As an attendant wheeled my father into the scan room, I sank into a chair in the waiting area.

I saw it fill up with patients. It was 7 a.m. but there were already at least 10 people waiting for their scans. When I went back in the afternoon to collect the report on my father, the number had more than doubled.

"Are there any beds available at all?" I asked the chief medical officer, feebly, knowing she would say no. She looked at me with kindness, and sadness. I managed a small smile, too.

I brought my father back home that day. My fingers had remained tightly crossed through the day as I hoped for his condition to remain stable.

Friends and acquaintances, even sources and professional contacts, called and offered to help but I knew we were as helpless as each other. I drew some strength from their concern.

On the evening of April 21, I consulted the lung doctor once again with the test results. She confirmed that my father had inflammation in his lungs and I should start looking for a hospital bed.

"I know how difficult that would be at the moment," she said. "But let's hope he responds to the medicines."

Her hospital had no beds available either.

I lost count of the calls I made that evening. Everything was full. I would get a lead and dial the number. They either wouldn't pick up, the number wouldn't connect or the lines would be perpetually busy. I gave up after a while.

"Whatever the emergency, we will have to deal with it at the time," I told my mother. She nodded quietly.

Over the last few days, however, my father started responding to the medicines. He began to talk coherently. He sat up and began eating. And most importantly, his oxygen levels stabilized.

He has made it through. But if his condition had worsened, I don't know what we could have done.

I've seen what happens when a broken system is overwhelmed

I am still holding onto that list of hospitals and medical resources I made. I am keeping my fingers crossed that my parents will be able to get the second dose of their vaccines without much trouble.

But I have seen what happens when a broken system is overwhelmed.

The tragedy that's unfolding here is the world's biggest Covid-19 crisis since the pandemic began more than a year ago. As I write this, an oxygen express train, the first one of its kind and carrying 70 tonnes of the gas, has reached Delhi.

Countries across the world are lending a hand. The Indian government announced on Sunday that they would be setting up 551 oxygen plants.

Why did we not boost our capabilities before? The oxygen plants could have been set up while cases were plummeting. Global trends should have taught us the second wave would be worse than the first one. There are going to be more until the world is vaccinated.

From May 1, anyone over 18 will be able to get vaccinated. The government will have to ramp up vaccine production urgently. Over the last few weeks, many states have reported shortages.

Why was the Indian government so desperate to announce an end to the pandemic? Only last month, the health minister - himself a doctor - said India was approaching the "end game" of Covid-19.

On April 17 - when I was anxiously watching my father's oxygen levels deteriorate - Prime Minister Narendra Modi was at an election rally in West Bengal, praising the size of the crowd that was too big for anyone to socially distance.

On Monday, I walked into a small crematorium near my home, where there were seven pyres burning. There were no hospital staff or health workers to certify the causes of their deaths, so we won't know how many were because of Covid-19.

One local told me: "I have never seen so many bodies burning here at the same time."

In 12 years living here, neither have I.