1. For the second time in a week, Public Protector Busisiwe Mkhwebane lost a legal battle – this time against Pravin Gordhan, who won a bid to avoid urgent disciplinary action against him. Yesterday, the court stopped the action pending a court review of her report on the so-called SA Revenue Service "rogue unit".

2. Eskom chair Jabu Mabuza has been appointed acting CEO of the embattled utility. Current CEO Phakamani Hadebe is leaving the company tomorrow – and a replacement has not been found.

3. The rand has staged a bit of a comeback after the painful slump on Friday. It was last trading at R14.16/$.

4. Bloomberg reported yesterday that foreign investors have now sold a net $4.8bn of South African equities and bonds in 2019, which is the largest amount on record (since 1998). Investors expect that South Africa will lose its investment-grade rating.

The 6 most unique types of public transportation around the world

Every day, people around the world get from point A to point B using unique methods of transportation that differ from the traditional bus and subway.

Some, such as the norry, are low-tech solutions created from a need for cheap access to transportation. Others, such as the high-tech maglev train, have been considered scientific breakthroughs.

Here are six of the most unique forms of transportation around the world, from Portugal to Cambodia. Coco Taxis have been a popular mode of transportation for tourists visiting Cuba since the 1990s. The taxis are made from fiberglass shells and seats welded onto Piaggio scooters and they get their name from their bright yellow, coconut-shaped shells. They can be found in major Cuban cities like Havana, Veradero, and Trinidad.

Jeepneys in the Philippines 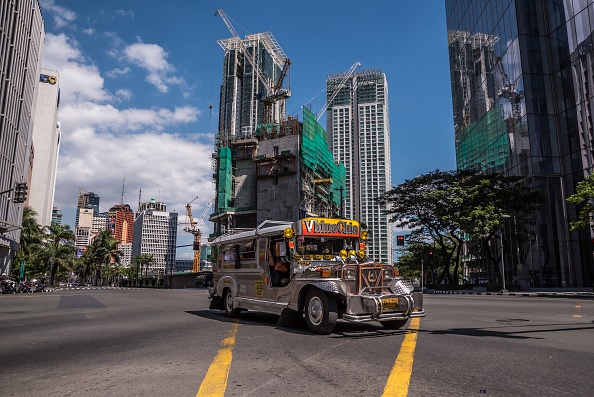 Jeepneys are considered a symbol of Filipino culture. These bus-like transports were made out of Willy Jeeps that were left by the United States after World War II in the early 1950s. The jeeps were lengthened to fit more seats, topped with a roof, and painted colourfully. The unique, individual paint jobs adorning these jeepneys have attracted designers like Christian Louboutin, who released tote bags inspired by the vehicle in 2018.

Over the past few years, Philippines President Rodrigo Duterte has been trying to phase out Jeepneys despite protests from the drivers and low-income citizens. President Duterte hopes to replace the Jeepneys with more eco-friendly, modernised vehicles that more closely resemble a bus than a Jeepney. This change is intended to reduce pollution, increase safety, and make public transportation more accessible.

The Schwebebahn in Germany The next time you're in Wuppertal, Germany, take a ride on the Schwebebahn suspension railway that snakes above the city and the Wupper tributary. The iconic monorail began operation in 1901 and is now being used by about 85,000 passengers daily.

The railway is also famous for a 1950 incident involving the circus elephant named Tuffi. The circus elephant rode the monorail as part of an advertising stunt but threw a fit and fell out a window, surviving a 39-feet fall into the river. These bamboo "trains" consists of an engine and a 6-foot (1.8 metres) by 10-foot (3 metre) bamboo board that sits on top of two axles with welded-on wheels. A wooden pole serves as the brakes and accelerator. The simplicity of the norry is important because they ride on a single track, which means norry drivers and passengers need to dismantle their carriages to allow each other to pass if two of them meet head-on. Because the bamboo plank is stacked on the axles and wheels, as opposed to being drilled together, dismantling only takes a minute, making it a convenient but semi-dangerous form of transportation. Magnets replace the traditional steel wheels and tracks on the Maglev train in Shanghai. The train levitates above the tracks using magnetic levitation (maglev) technology, and the lack of wheels and engines means the train is frictionless, allowing it to reach 267 mph (429km/h). This environmentally-friendly train is quiet, uses less energy than normal trains, and still functions well under inclement weather because of the lack of moving parts.

Maglev trains are also functioning in South Korea's Incheon Airport and on the Linimo line in Japan. 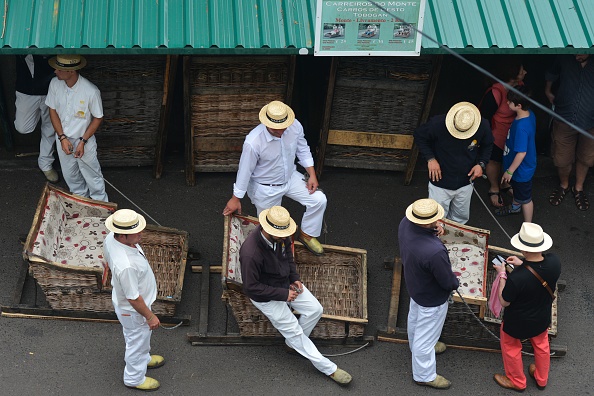 A general view of the toboggan drivers in Monte, wearing the traditional uniforms, and awaiting for visitors to ferry them downhill at high speeds in large wicker baskets.

The toboggan consists of a wicker sledge that sits on wooden sledges controlled by two human drivers. The drivers serve as the brakes, accelerator, and steering wheel. These sleds can reach up to 30 mph (48km/h) and were once a common form of public transit to get down the hill from Monte to Funchal. Now, they're more of a tourist attraction.