Photographer Wayne Osborn spotted this male humpback calf 65 feet deep in the waters off the Vava'u Island group in the Kingdom of Tonga.
Wayne Osborn / Wildlife Photographer of the Year

Humans rarely get to glimpse the the animal kingdom up-close. But each year, the Wildlife Photographer of the Year contest, which is developed and produced by the Natural History Museum in London, offers a peek into the lives of species around the world.

The contest awards photographers whose work inspires us to consider our place in the natural world and our responsibility to protect it.

This year, photographers from 100 countries submitted 48,000 entries, and contest judges announced a group of winners in October. Now, the public gets to vote on a people's choice award.

The contest organisers curated a shortlist of photographs for this voting process. Many of those images throw into sharp relief the relationships between creatures - mothers and cubs, predators and prey, people and animals. One photo captures a baby jaguar and its mother toting a large anaconda, while another seems to show two mice duking it out on a London Underground platform.

Here are 20 of the best front-runners in this year's people's choice contest. Voting is open until February 4, 2020, and the overall winner will be announced in February after voting ends.

Kenyan photographer Clement Mwangi spent time observing this beautiful leopard as she soaked up the warm rays of the setting sun. Mwangi said that sometimes as a wildlife photographer, you can miss the exceptional while looking for the unusual. This female eventually became so used to his presence that one day she fell asleep while Ardnt was nearby. That enabled him to capture this portrait of her relaxed face as she awoke.

Of course, big cats are not known for being peaceful. In this image, a jaguar cub helps its mother carry a giant anaconda out of the Três Irmãos river in Brazil. 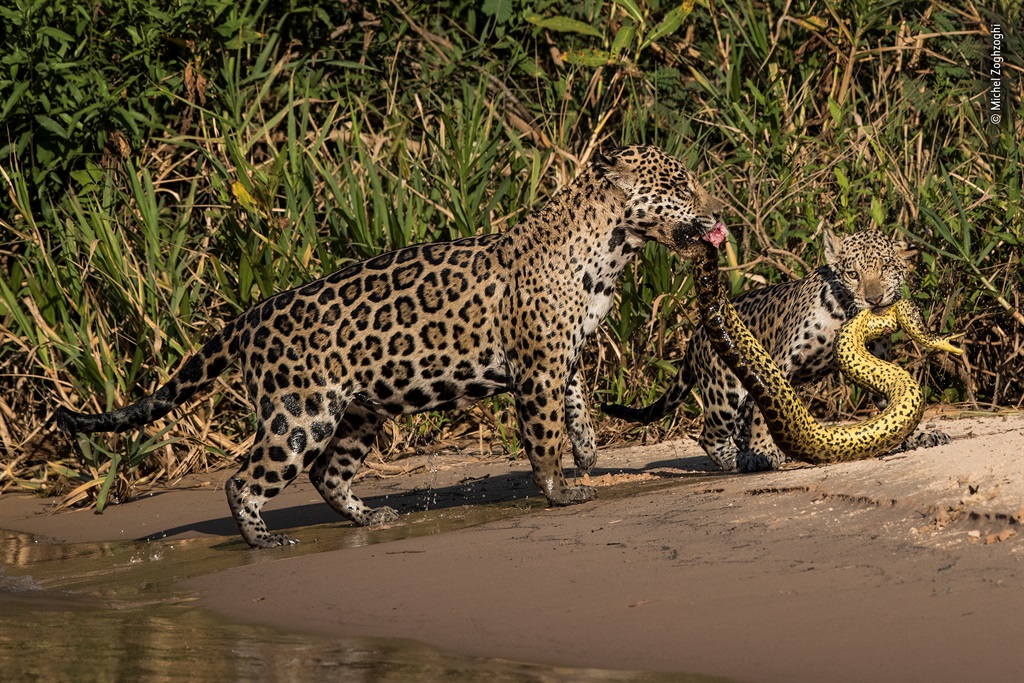 The two hunters and their prey mesmerised photographer Michel Zoghzoghi, who was boating on the river.

Mothers and their young make for especially compelling wildlife photography. In this image, Marion Volborn caught a grizzly mother and her cub scratching that unreachable itch. During a trip to the Nakina River in British Columbia, Volborn spotted this bear and her cub approaching a tree. After the grizzly started to rub her back against the trunk, the cub imitated its mother.

This Caribbean flamingo's shock of pink hides her baby, which pokes out from under its mother's wing to be fed. The Ría Lagartos Biosphere Reserve in Mexico's Yucatán state is home to the country's largest flock of Caribbean flamingos. This chick is less than five days old; after another week, it will leave its nest and join other youngsters in the colony. Levi encountered this polar bear family in March, before they began a long journey north to the sea ice, where the mother could feed.

But not all animals are lucky enough to live with their mothers or families. Giant-panda breeding centers like the one pictured above are growing in popularity in China.

According to photographer Marcus Westberg, it's unclear how these centers will benefit the species, since wild pandas are increasing in number and many breeders lack a realistic plan for how to re-release the pandas into the wild. Mugambi often spends weeks away from his own family caring for orphaned black rhinos, which are placed in wildlife sanctuaries like this one after their mothers are killed by poachers.

Some animal moms-to-be, meanwhile, start preparing for the big event before their offspring arrives. At first glance, photographer Stefan Christmann thought these emperor penguins were caring for an egg. It turned out to be a snowball. The photographer thinks this penguin couple was practicing transferring the snowball between them as if it were an egg.

A female emperor penguin typically lays one egg a year in May or June. Then she must carefully transfer the egg to her partner, who keeps the egg safe in a pouch between its legs. Males hold and warm the eggs for months while the females return to the sea to feed.

Emperor penguins form colonies that can include up to 25,000 individuals. Photographer Yaz Loukhal took a helicopter flight then trekked through thick snow in order to photograph this group. His efforts earned him an incredible view of the colony. Marmots have become accustomed to the presence of humans in Austria's Hohe Tauern National Park. Allowing people to observe and photograph them at close range benefits the marmots, since human company deters predators like golden eagles.

Whales also travel in groups — theirs are called pods — and hunt cooperatively. Photographer Jake Davis snapped this photo of a humpback whale diving for fish while its pod swam nearby. This pod was carrying out a type of hunting called bubble-net feeding. Once the leader whale locates fish, the other members of the pod swim in circles while blowing bubbles out their blowholes. This action creates a natural net, trapping the fish for a feast.

Fish often swim in schools for protection from predators. Photographer David Doubilet captured the silhouettes of red tooth triggerfish in the Philippines. These fish floated above a school of convict blennies, a type of tiny goby fish. The Pacific coral below them is found in the Verde Island Passage: a strait that separates the Philippine islands of Luzon and Mindoro. It's one of the most productive marine ecosystems in the world.

In order to start a family, some males have to first win a partner's affection. In this photo, a female kestrel has accepted an offering from a male suitor. The dead lizard could represent the beginning of the kestrels' relationship.

A baby tarantula made for a nice meal for this rainforest frog. Photographer Lucas Bustamente's spotted this labiated rainfrog enjoying its dinner while he was on a night hike in the Ecuadorian jungle.

In a distant climate, Norwegian photographer Audun Rikardsen captured a different type of predator: a golden eagle. It took him three years of planning to get this shot. Maleev braved negative-44-degree-Fahrenheit temperatures to witness this rare scene in the Mongolian highlands. Pallas's cats are no bigger than a domestic cat; they stalk small rodents, birds, and occasionally even insects.

Elsewhere in Mongolia, Maleev also snapped a photo of a long-eared jerboa scuttling through the Gobi Desert. Jerboas are hopping rodents that can travel at speeds up to 15 miles per hour. Each critter has its own solitary burrow.

A different type of rodent resides in the London Underground. Photographer Sam Rowley wasn't afraid to lie down on the train platform in order to capture this mouse duel. The two mice were fighting over scraps of food dropped by passengers, but their squabble only lasted a split second. Then one mouse grabbed a crumb and the subterranean denizens went their separate ways.

Creatures of different species come into conflict, too. In this photo, an aloof kestrel sits above an annoyed magpie on the dead flower spike of an agave plant. Over several months, photographer Salvador Colvée Nebot watched various birds use this agave bloom in Valencia, Spain as a perch before descending to a nearby pond.

According to Nebot, a pair of kestrels were frequent perchers, though they got hassled by magpies during each visit.