1. The rand looks like it's on a death march towards R15/$ with global markets in turmoil. Yesterday, US stocks suffered their worst day of the year as investors worried about the trade fight between the US and China. The JSE was bleeding all over the place, except for gold and platinum stocks. The gold price in rand reached a record level of close to R22,000 an ounce yesterday, as investors piled into this ‘safe haven’ asset.

Today doesn’t look like it will look much better: Overnight, the US government labelled China a “currency manipulator”. It will ask the International Monetary Fund to “eliminate the unfair competitive advantage created by China’s latest actions”. China has allowed its currency to fall through the key 7-for-a-dollar level in retaliation to US threats to introduce a 10% tariff in September.

2. This morning, Nedbank released its results – along with a stark warning about the SA economy. It downgraded its expectation for 2019 economic growth from 1.3% to 0.5%. “Significantly more urgency is required with the implementation of structural reforms to stem the economic and fiscal deterioration currently being experienced in the SA economy. If we are unable to do this, all the hard work done on maintaining our last investment grade rating from Moody’s will be in vain, at great cost to all South Africans as a result of higher inflation and higher interest rates, as well as lower growth and lower levels of employment than would otherwise have been the case.” Its headline profit for the past six month was up 2.6% to R6.9 billion.

3. Banks could face a massive strike next month as the Sasbo union rallies its 73,000 members to protest against job cuts. Sasbo threatens to make sure that SA “runs short of money”, by disrupting the flow of money to ATMs.

4. In a note to its members, Business Unity South Africa's president Sipho Pityana said he is "underwhelmed" by government's choice in appointing Freeman Nomvalo to lead the turnaround at Eskom. He expressed concern that Nomvalo does not have track record in "restructuring".

5. Eskom has confirmed it will start selling large quantities of electricity to Zimbabwe again soon, fully reinstating a power export arrangement it curtailed after Zimbabwe had failed to pay its debts. Eskom did not say how much of its arrears Zimbabwe had settled. But at a meeting in Harare on Monday, Zimbabwe's secretary for finance, George Guvamatanga, said at least $10 million (the equivalent of around R149 million) was paid last week to foreign electricity suppliers – which he did not name – with an additional payment due this week.

10 of the most expensive yachts in the world

It has become normal for the world's wealthiest individuals to drop millions, even billions, on lavish superyachts.

Oil Sheikhs and Russian tycoons alike are spending their holidays on massive yachts with swimming pools, basketball courts, and even concert halls.

Walmart heiress Ann Walton Kroenke owns the Aquila, which is estimated to be worth $150 million (R2.2 billion). The yacht was spotted in Antibes in during the Cannes Film Festival in May, Business Insider previously reported.

The estate of Microsoft cofounder Paul Allen once owned a yacht dubbed the Octopus. It's valued at $200 million (R3 billion). The yacht has 41 suites and cost a whopping $200 million to build, Business Insider previously reported. The Octopus comes with a pool, two helicopters, and a movie theater. If that's not enough, there's also a basketball court and recording studio.

Business Insider also reported that the yacht was spotted at the Cannes Film Festival in May. The yacht won the Motor Yacht of the Year award in 2009. It has two VIP suites that each come with a bathroom, living room, and double bedroom, according to Superyachts.com.

The Dilbar, the world's largest yacht by gross tonnage, was built for Russian billionaire Alisher Usmanov for $256 million. 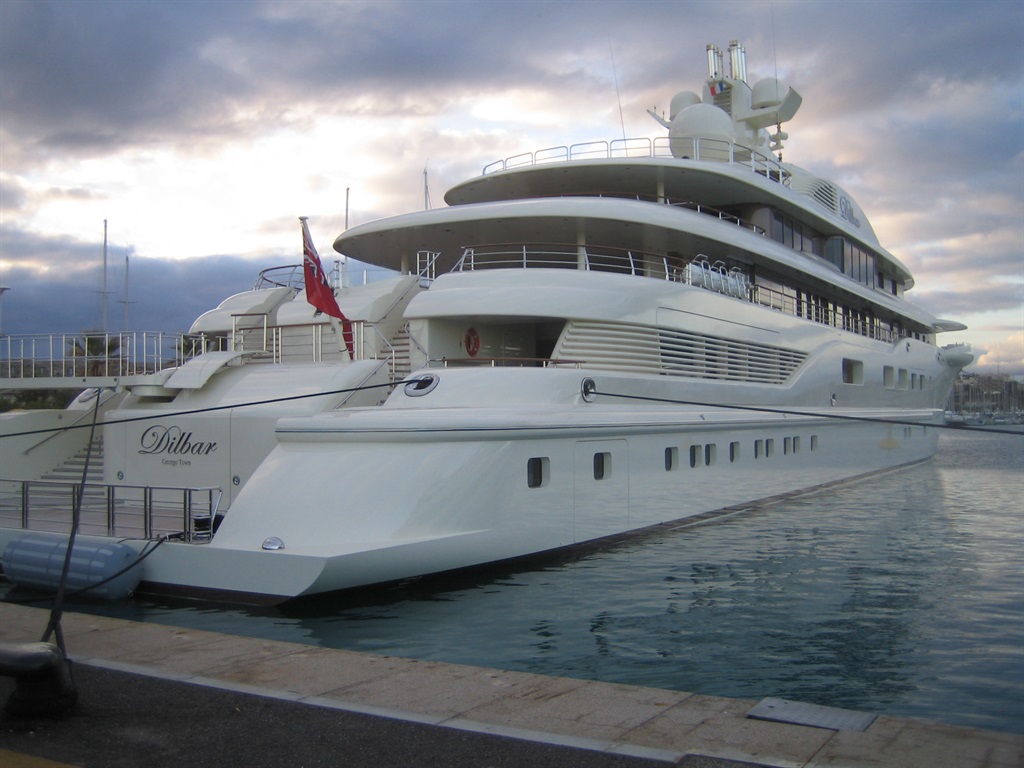 It is 155m long, making it one of the biggest megayachts on this list, according to The Guardian. There's not much information about the Al Said's different amenities. It does, however, have a concert hall that can fit a 50-piece orchestra.

The gigantic $400 million Dubai yacht measures 162m and is currently owned by Sheikh Mohammed bin Rashid Al Maktoum, the Vice President and Prime Minister of the UAE and Emir, or ruler, of Dubai. The superyacht features a mosaic swimming pool, circular staircase, and helipad, The Guardian previously reported. It can fit 24 guests overnight.

Russian tycoon Andrey Melnichenko owns Motor Yacht A, which is worth $400 million. The yacht has seven luxurious cabins that sleep 14 guests, Business Insider previously reported. It also has three swimming pools, one of which has a glass floor.

David Geffen, a billionaire entertainment mogul, has owned the $590 million Rising Sun since 2010. Geffen originally shared the yacht with Oracle founder Larry Ellison, Business Insider previously reported. The  superyacht comes with a basketball court and can fit 18 guests. In April 2017, Geffen hosted the Obamas on the megayacht.

The owner of the $600 million Azzam yacht is unclear, but many speculate it is owned by the royal family of Abu Dhabi. The yacht is also rumoured to have its own submarine with a missile defence system, Business Insider previously reported.

At 180m  long, the Azzam has long held the title of the largest superyacht in the world.

The $1.9 billion Eclipse yacht was delivered to Russian billionaire Roman Abramovich in 2010.